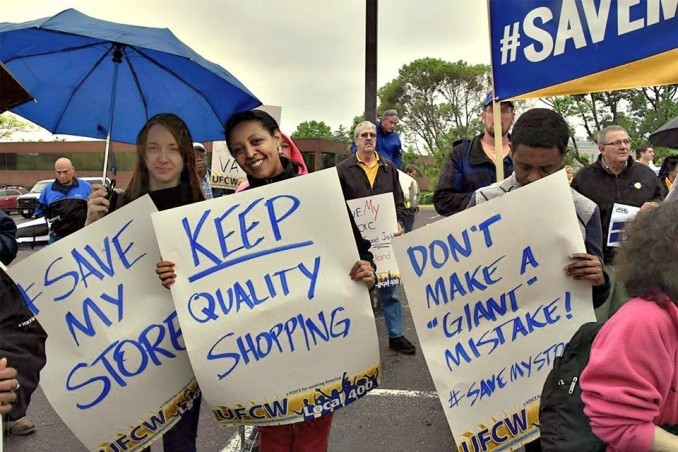 By a UFCW steward
Landover, Md.

Food and Commercial Workers Local 400, joined by other unions, community organizations and half a dozen religious leaders, took to the streets May 11. They marched to Giant Food’s headquarters to demand full disclosure of the secret sale of eight Giant Food supermarkets that currently have contracts with UFCW Local 400.

Local 400 President Mark Federici told affected union members that Giant has disclosed no more than what was known six weeks ago about the behind-closed-doors deal-making Giant is engaged in with other big grocery chains. He characterized politicians that the union has approached about the matter as only “talking about good jobs” and in reality “doing nothing” to save union jobs.

“We get nothing but disrespect from corporate America,” Federici asserted, pointing out that corporations like Giant “can only make big deals because of our hard work!” Local 400 represents 35,000 members in retail food, food processing, health care, and other industries and services from Maryland to Tennessee.

Local 400 members this writer spoke to speculated that the two Maryland and six Virginia stores could be going to Kroger or Ahold. Local 400 is in a bitter battle with Kroger at the bargaining table right now. As for Ahold, one union member, addressing the crowd of about 300, said, “If [nonunion] Ahold gets control, we’ll go from a middle-class salary to a Section 8 salary.”

The last speaker before the crowd took to the streets was well-known internationalist, the Rev. Graylan Hagler. With the other clergy standing behind him, he declared, “The rich will take away from you anything you’re not willing to fight for. We won’t back down. We stand arm-in-arm to turn back the forces of evil.”

The rally outside Giant’s headquarters was addressed by Teamsters Local 730 President Ritchie Brooks: “Usually it’s us coming to the UFCW to ask for your help. We’re your comrades. Let us know and we’re there for you.” Several speakers, including AFL-CIO Metro Washington Council Executive Director Carlos Jimenez, berated the Federal Trade Commission for allowing Giant to sell out to the highest bidding conglomerate.

By not stopping increased monopolization of the food industry, the FTC has partnered with the capitalists responsible for ever-increasing food prices in a period when the price of gasoline — the industry’s previous excuse for raising food prices — has been down in the bust half of the economic cycle. As bluntly put by one speaker, “The FTC is closing us down.” Several more speakers, including Local 400’s president, repeated this theme.

The Democratic Party-controlled state government in Annapolis recently defeated legislation proposed by the UFCW to have labor law apply to airport SuperShuttle drivers who are exploited as “independent contractors” at less than the minimum wage.

This new betrayal by the government’s FTC appointees shows that, once again, the political party that repeats ad nauseam that it’s “for the workers” has other allegiances.

Unsure about whether any or all of the eight stores will close or will reopen with new hires or the present union workforce, what the rank and file most often wrote on the signs they marched with was “SAVE OUR STORES.”

Among the other unions marching in solidarity were sister UFCW Locals 27 and 1994, Teamsters Locals 730 and 639, Amalgamated Transit Union Local 689 and Service Employees Local 32BJ.