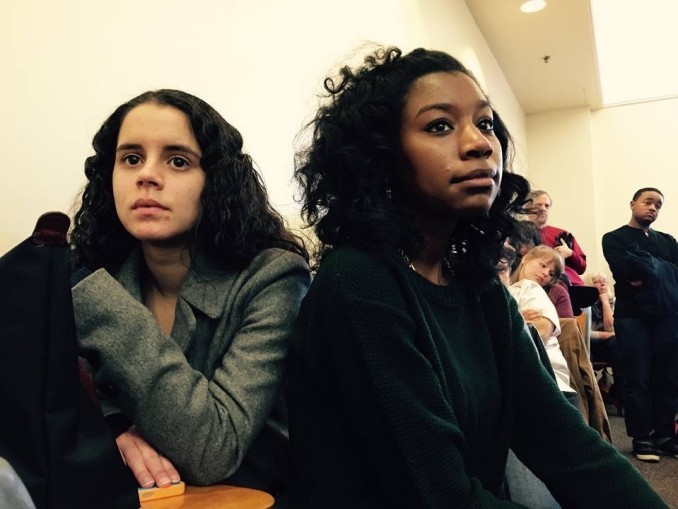 Atlanta — In a bold action, Georgia undocumented youth and their allies entered the meeting room of the Board of Regents of the University System of Georgia on May 10, and then sat in the chairs of the appointed policymakers for the state’s public university system.

The great majority of the board’s 19 members, who each serve 7-year terms, are heads of major corporations such as Georgia Power, PruittHealth, Synovus financial services, and liquor and beer distributor Crown Distributors. Several are close political allies and donors of Gov. Nathan Deal. Only one of the two women regents has any background in education.

Since 2011, graduating high school students without papers have been barred from applying to the top five universities and are ineligible to pay in-state tuition at all of the system’s other universities, colleges and technical schools. Out-of-state tuition can be double, triple or even more, effectively denying access to higher education to thousands of undocumented youth no matter their test scores or academic qualifications. They are not eligible for federal Pell grants or the state HOPE scholarship funds.

With supporters in the audience, seven young people took the regents’ places at the front of the room and convened a “people’s hearing.” After testimony from state Sen. Vincent Fort, immigration rights activist and lawyer Azadeh Shahshahani and undocumented student Salvador Alvarado, they announced their decision to revoke the two policies, 4.1.6 and 4.3.4, and end segregation and discrimination in Georgia’s institutions of higher learning.

When the two undocumented youth and five young allies would not cede the seats to the businessmen and political appointees of the governor, they were arrested by the Capitol police on trespass charges.

All were released about 12 hours later from the Fulton County Jail. Their civil disobedience action received wide news coverage.

The campaign to change the Board of Regents’ policy dates to 2012, when the federal government provided “legal presence” to those brought to the U.S. as children who met additional criteria.

This program, Deferred Action for Childhood Arrival, grants work permits and driver’s licenses to those accepted into the program and exempts them from deportation.

In 2011, the Georgia Legislature enacted a number of anti-immigrant laws that denied those without “lawful presence” certain benefits, including full access to higher public education. The political establishment, including the courts, so far have declared that federal “legal presence” is less than Georgia’s “lawful presence.”

The May 10 action and many others have been organized by Freedom University students, a nationally recognized alternative school initiated by professors at the University of Georgia to provide college-level courses for undocumented students, now located in Atlanta. Dozens of highly motivated and qualified students are continuing to advance academically but are also learning the skills of political activism.

Freedom University youth have been accepted into numerous universities and colleges across the U.S., where they have excelled. Twenty-one states currently have no restrictions on admission of undocumented students and six, including California and Texas, offer financial aid.

The Freedom University students see themselves as struggling in the same tradition as the many thousands who marched, sat in and went to jail to end Jim Crow laws denying African Americans their civil and human rights.