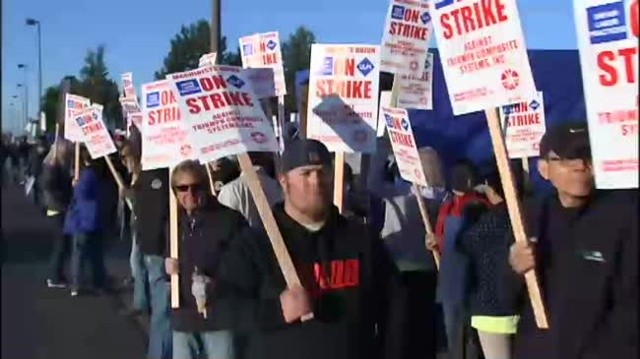 Some 400 aerospace workers at Triumph Composite Systems in Spokane, Wash., walked off the job at midnight on May 11 and set up a picket line outside the factory. The members of Machinists Union District Lodge 751 voted 94 percent to reject the company’s latest contract and 93 percent in favor of striking.

At issue is Triumph’s unequal, two-tier pay system, which eliminated pensions and offers significantly lower wages for newer hires doing the same work as higher paid co-workers. “This is a generational job,” said longtime Triumph worker Victor Parker, “and these kids deserve as good if not better benefits than what we had.” Dan Byrne added, “We’re one equal team. We work together. We fight together.” (krem.com, May 11)

The union accuses Triumph of bad-faith bargaining by attempting to negotiate with workers individually, and even threatening some. Jon Holden, president of 751, reported in a statement that Triumph has not only benefitted from the state’s $8.7 billion aerospace industry tax incentive program, but has also moved some jobs from Spokane to Mexico: “We don’t think it’s fair for Triumph to expect the Spokane community to support their corporation with tax dollars, only to have them take some residents’ jobs away while cutting overall pay and benefits for those who are still working.”

In 2007, the union struck for three days to resist the two-tier pay system. This time union members vow to stay out “as long as it takes.” (iam751.wordpress.com, May 10)

Inmates at Alabama’s Holman and Elmore prison facilities went on strike May 1, International Workers’ Day, to protest the institutions’ deplorable conditions as well as the racist injustice system that put the inmates there. Within days, the strike spread to three other Alabama prisons: Staton, St. Clair and Donaldson.

The inmates’ list of demands includes repealing the habitual offenders statute, banning life sentences for first-timers, releasing inmates who are eligible for parole and ending forced prison labor, which inmates rightly refer to as “prison slavery.” Overall, the prisoners are demanding “education, rehabilitation and re-entry preparedness.” For the full text of their demands, visit tinyurl.com/j92q8gj.

Inmates report that prison guards have retaliated against the strikers by withholding food and refusing to clean inmate facilities. A photo uploaded to Twitter shows toxic black mold growing in the showers. In a text message sent to the press, one inmate wrote, “We [are] weak, feeling nauseated and having headaches from the lack of balanced meals.” (theintercept.com, May 10)

For more information, petitions and a way to donate to support the strikers, visit freealabamamovement.wordpress.com.

How many hours a day do workers spend caring for people with disabilities in their homes? An Associated Press study conducted in April found that caretakers, usually family members, report working up to 18 hours a day. Before a new federal rule went into effect on Jan. 1 requiring homecare workers be paid time-and-a-half after clocking 40 hours a week, the workers made straight time.

As of May 1, the state of Illinois is balking at paying overtime to 24,000 homecare workers who make $13 an hour. A spokesperson for the state called it “fraudulent” for workers to claim they’re on the clock three-quarters of the day. That’s why the state issued the new ruling requiring workers to justify their hours.

And that’s why SEIU Healthcare Illinois filed an unfair labor practices charge with the Illinois Labor Relations Board on May 6. The union, whose members are only full-time workers, represents caregivers who are predominantly women, the majority women of color. Currently negotiating a new contract due June 1, SEIU charges that the new policy was timed to force it to make concessions during collective bargaining. (AP, May 6)