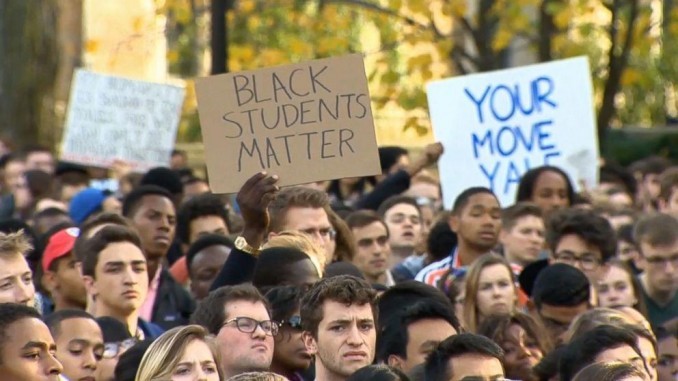 The brutal murder of nine African Americans at the historic Emanuel African Methodist Episcopal Church in Charleston, S.C., in June last year by a racist who brandished Confederate symbols sparked a nationwide movement to have Confederate flags and statues removed and to remove the names of slave owners from buildings and elsewhere.

One such rich slaveholder was John C. Calhoun, an 1804 Yale graduate, after whom Yale University’s Calhoun College is named. In the wake of the Charleston shooting, Yale students began a petition to remove Calhoun’s name and got more than 1,500 signatures. The petition reads, “Like the official display of the Confederate flag in South Carolina, Calhoun College represents an indifference to centuries of pain and suffering among the Black population.”

For anyone who doesn’t know how rotten Calhoun was, in the early 1800s, he was the most vicious national voice promoting the slavocracy, even calling slavery a “positive good.” And he was powerful as well as rich, a representative and senator from South Carolina, a secretary of state and a vice president under both John Quincy Adams and Andrew Jackson. One of his major “contributions” was to author the doctrine allowing slaveholding states to disregard any federal law inhibiting slavery.

In the face of the Underground Railroad, led by heroes like Harriet Tubman, Calhoun authored the Fugitive Slave Act of 1850. This law enabled slave owners to track down and re-enslave fugitives in the North.

Defying his students, Yale President Peter Salovey announced on April 27 that the school refuses to remove the white supremacist’s name from the residential college.

At a time when even the South Carolina Legislature would agree to remove the Confederate flag from the Statehouse, why would a New England Ivy League university refuse to erase the name of this racist monster? The only logical reason is that conceding this part of Yale’s past opens the door to re-examining the whole of Yale’s historic entanglement in and enrichment from slavery.

Yale University is named after Elihu Yale, an official of the East India Company in the late 1600s, who made a fortune from the Indian Ocean slave trade. Yale College Dean Holloway pointed out last year, “At its founding and for its first 150 plus years, yes, Yale, like so many other institutions of the era, were complicit in plunder because their finances were interwoven with the global slave economy.” (yaledailynews.com, March 30, 2015)

The unpaid labor of millions of African slaves over centuries was central to the accumulation of capital of many of today’s banks, insurance companies, corporations and elite institutions like Yale University. This accumulation, worth trillions in today’s dollars, was particularly intensified after the invention of the cotton gin by another Yale graduate, Eli Whitney. It continued through the period of sharecropping, the economic engine of Jim Crow, enforced by the brutal terror regime of the Klan.

This racist legacy continues in a thousand ways to this very day, with housing, education, prisons, and even clean water policies from governments and corporations alike all designed to plunder the wealth produced by the African-American community.

For years there has been a growing reparations movement demanding a return of this wealth back to the African-American communities from which it was and is so cruelly extracted. Yale’s administration and all of its Wall Street sponsors want to avoid anything that might open the door to that just reparation of wealth.

Workers World supports the just demand of the Yale students to rename their college. But that’s just a start. The first plank of the Workers World Party 2016 election campaign includes the demand for reparations now! That debt must be paid by wealthy institutions like Yale University and all of its Wall Street backers.