Workers filled the streets in Argentina in protest marches on April 29 against right-wing President Mauricio Macri’s campaign of job cuts. The main demonstration took place in Buenos Aires, where hundreds of thousands of people participated. Protests also took place in other provinces.

In a show of unity, the five main trade unions called the march despite their own differences with each other.

”This is a historic gathering. … We understand that the interests of the workers come before the interests of the union leaders,” said Hugo Moyano, who heads the truckers union and a branch of the influential CGT labor federation. “Macri is against the workers.” (Mercopress, April 30) They have united not only to oppose job cuts but also against mounting poverty, soaring public utility bills, rampant inflation and the government’s neoliberal austerity policies.

In his first four months in power, Macri has overseen the sackings of 127,000 public and private sector workers, despite the familiar right-wing election campaign promise to create more jobs. Unions are vowing a general strike if Macri vetoes a bill reinstating many laid off workers.

Macri has also welcomed U.S. “vulture funds,” which bought Argentinian sovereign debt bonds at a small fraction of their face value, and then demanded repayment in full. 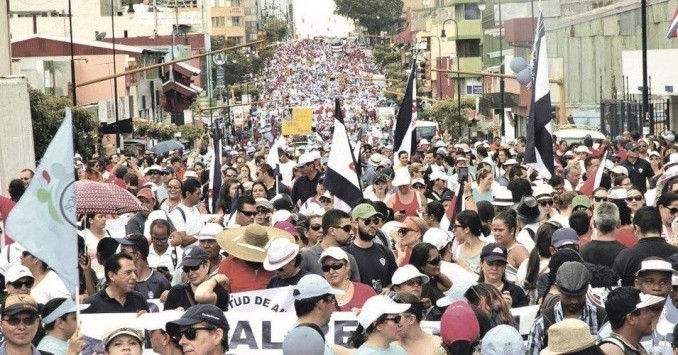 Union groups in Costa Rica launched a massive strike on April 26 that is being called the “Mother of All Strikes.” Public schools, airports and health care services came to a halt as thousands of workers went on strike and marched to the Legislative Assembly. They demanded attention to 16 points, including respect for labor rights, defense of the public health care system, defense of the education budget, opposition to sales and income tax increases, salary hikes, land for peasants and access to water as a public right.

The unions are also demanding that the rich pay their fair share of taxes. Official calculations estimate that eight percent of the gross domestic product is lost to tax evasion.

Protesters carried banners with messages like “Let the rich pay more taxes” and “For the dignity of workers,” among others. One student said that she was participating in the march in protest of attempts to privatize the Costa Rican National Institute of Education “because it is the only chance we have to improve ourselves.” (commondreams.org, April 27)