Syracuse, N.Y. — April 28, Workers Memorial Day, commemorates workers killed, injured or made ill at their jobs. That day, Antonio Salinas chalked the outline of a fallen person on the pavement in downtown Syracuse. Salinas, a dairy farm worker from Mexico, was seriously hurt on a forklift last October at the Central New York business where he worked and lived. No longer able to do his job, he was evicted by the farm owner who denied the injury was related to his work.

Salinas, along with others from the Workers Center of Central New York (WC-CNY), marked the day by leafleting other workers and making street art. Some bore signs: “We mourn the dead, we fight for the living/ Honremos a los muertos, luchemos por los vivos.” (tinyurl.com/jpxodnl) 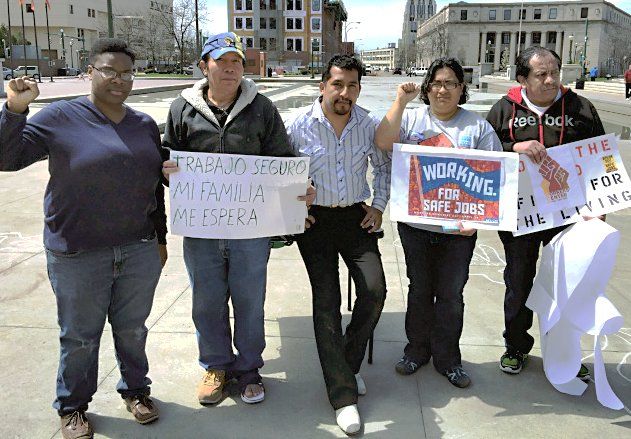 In Central New York in 2015, 42 workers died on the job, including Sean Tilghman, a sanitation worker who was hit by a speeding car and died instantly on the street. He was one of the 4,600 workers killed each year on their jobs in the United States, according to Occupational Safety and Health Administration data. That doesn’t count the estimated 50,000 others who die from illnesses caused by their jobs. (tinyurl.com/zb7vaoo)

Dorothy Wigmore, with the Occupational Health Clinical Centers of SUNY Upstate Medical Center, has highlighted sobering facts about workplace injuries and deaths: Though headlines dramatize fatalities among police, sanitation workers, like Tilghman, die at twice the rate as cops and almost seven times the rate of firefighters. The top 20 low-wage U.S. jobs — mostly held by women — have 77 percent of reported job-linked injuries and illness. Over half of serious work injuries are not even reported.

Health and safety are where bosses often cut corners first. Estimates on injury numbers run low because only immediate “lost time” injuries are counted, but not others like repetitive-stress injuries to factory workers or illnesses like cancer caused by workplace toxins.

There are many hidden work-related injuries. Workers with the lowest wages, disproportionately Black and Latino/a workers, also have the highest hypertension rates. The growing “gig economy” means more bad health for workers, as “temps” are 50 percent more likely to be hurt at work than “regular” employees. (syr.com)

Under capitalism, worker deaths and injuries are calculated by the bosses as part of the cost of “doing business.” Employers don’t risk much by endangering employees. Under OSHA penalties, the recent average employer cost for an injured worker was $2,148. For a dead worker? The median penalty to employers was $7,000. (tinyurl.com/hn36bkd)

Latino/a workers are 9 percent more likely to be killed or injured on the job, given higher rates of high-risk manual work. The AFL-CIO “Death on the Job” says 64 percent of Latino/a workplace deaths in 2014 were immigrant workers. (tinyurl.com/axw6cgf)

Organizer Nikeeta Slade at the WC-CNY is particularly concerned about Mexican, Guatemalan and Honduran migrant workers, who are often reluctant to report safety violations for fear they will be forced to leave the country.

But WC-CNY member Antonio Salinas is part of a growing movement of migrant and immigrant workers fighting for workplace safety. After his injury and loss of work, Salinas filed a medical appeal with workers’ compensation. After months in a legal labyrinth he won the right to medical benefits and back wages. He says he is committed to fighting because “We come here to make a living, not to lose our life.”

Crispin Hernandez and Saul Pinto, also of the WC-CNY, exposed unsafe working conditions in Lowville at Marks Farm, which employed them as dairy workers. Their boss fired them for reporting him to OSHA. On Workers Memorial Day they received the “Health and Safety Heroism at Work” award from the CNY Area Labor Federation, AFL-CIO, for their courage. Speaking at a WC-CNY May Day celebration, Hernandez said: “I was trying to better conditions for myself and my co-workers. Unity makes power.” (workerscentercny.org/blog-2)

On April 28, as workers across the U.S. remembered their fallen and injured comrades, striking Verizon workers walked the picket line in front of a Syracuse-area tech-support call center where almost 300 people are usually at work. They are members of the Communication Workers and International Brotherhood of Electrical Workers. Some do very dangerous jobs, including aerial and transformer installation. Call center workers’ and telephone operators’ jobs are ranked the third most stressful in the workplace. (tinyurl.com/gnxxp4p)

On the line, workers emphasized they’re fighting for both a fair contract and safe working conditions. They told this reporter: “We are not striking just for ourselves. We are doing this for everyone.”