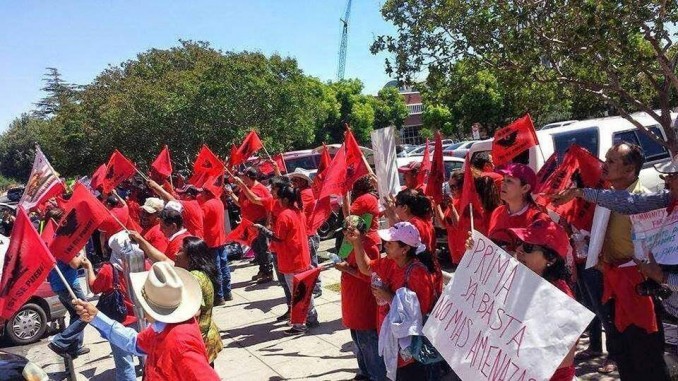 California farm labor board rules in favor of Farm Workers

The full California Agricultural Labor Relations Board issued a unanimous decision April 15 decisively affirming the 2015 opinion by an ALRB administrative law judge who found the giant Fresno-based tree fruit grower Gerawan Farming guilty of committing numerous violations of California labor laws. The ruling set aside the 2013 election aimed at decertifying the Farm Workers from representing the fruit pickers and dismissed the decertification petition. Among  labor law violations, the judge ruled that Gerawan became a principal party to the decertification, though employees filed it. Gerawan permitted anti-union signature gathering during work while prohibiting comparable pro-union activity; and Gerawan granted a wage increase during the campaign, a blatantly unfair labor practice, and unlawfully solicited grievances against the union. Gerawan vows to contest the ruling. Stay tuned. (Los Angeles Times, April 19)

After more than 15,000 supporters of Gerawan Farming tree fruit workers signed a petition urging California’s Fresno County agricultural commissioner to quickly investigate a pesticide spraying incident on Feb. 22, the agency replied that the investigation could take two years! But the agency is supposed to protect the workers. Only days after the spraying of three pesticides by a neighboring farm did the workers learn that people should get medical help right away. But Gerawan sent the workers immediately back to the fields and only later that day, after they developed headaches, burning eyes and upset stomachs, were they seen by a doctor. The workers, who have been struggling since 1992 to be represented by the Farm Workers, ask supporters to sign their petition, action.ufw.org/2years, telling the agricultural commissioner to stop delaying and protect Gerawan workers. (ufw.org, April 13)

Even though two class action lawsuits, decided April 21, awarded up to $100 million to about 385,000 Uber drivers in California and Massachusetts, the workers will still be erroneously classified as “independent contractors.” That means Uber, a private company valued at $62.5 billion in December, which connects passengers to freelance drivers, does not have to pay the workers health benefits, Social Security, unemployment or workers’ compensation if injured; paid sick or vacation leave; or other safety-net benefits. While the settlement will give drivers several thousand dollars each, that’s peanuts  compared to what the owners are raking in. So Uber is contributing to the labor trend of low pay, irregular hours and job insecurity — the same terms Verizon is demanding in its latest contract offer.

California and New York recently increased paid family leave. Since 2004, California workers have received up to 55 percent of wages for six weeks of leave to care for a new child or a seriously ill relative. But the state found that low-paid workers couldn’t afford to live on half their income. Starting in 2018, a new law raises the rate to 70 percent for the lowest paid workers who make one-third of the state’s average weekly wage of $1,121. For other workers, the rate rises to 60 percent, up to the maximum weekly benefit of about $1,200.

In New York, which passed its first paid family leave law in April, workers can receive up to eight weeks’ leave starting in 2018. The replacement rate is capped at 50 percent of the statewide weekly wage of nearly $1,300. In 2021, workers can take 12 weeks of leave capped at 67 percent of the statewide weekly average wage. But low-paid workers probably won’t be able to take the leave at 50 percent nor for the full 12 weeks at 67 percent. “A higher replacement rate for a shorter time could … help more workers than a flat rate for a longer period,” noted the April 20 New York Times.

In contrast, 185 other countries offer fully paid family leave: from two years in countries like Finland and Poland, to a year in Canada and Germany, to 18 weeks in Cuba and 12 weeks in Mexico. It’ll take the overthrow of capitalism to bring the U.S. into the 21st century for paid family leave!