Havana — A massive outpouring of humanity marched in Havana on the morning of Sunday, May 1, to celebrate International Workers’ Day. They streamed by the Martí Memorial, filling the wide Plaza of the Revolution. It seemed even larger and more densely packed than last year, thick with large workplace banners and birthday greetings for Cuba’s revolutionary historic leader, Fidel Castro, who will celebrate his 90th birthday in August.

The marchers, over a half-million strong, enthusiastically embraced this year’s theme: “For Cuba: Unity and Commitment.” Cuban teachers and educators led the march in recognition of their work and commemorating the historic countrywide Literacy Campaign on its 55th anniversary.

Revolution Square had a new electronic message board and lighting for the silhouettes of Che Guevara and Camilo Cienfuegos. Ulises Guilarte de Nacimiento, secretary general of the Workers Central (Central Trabajadores de Cuba, CTC) gave the main report while other elected officials, including Cuban President Raúl Castro, filled the dais high above the square.

There were loud cheers for Raúl and Fidel. The Cuban national anthem “La Bayamesa” opened the program. 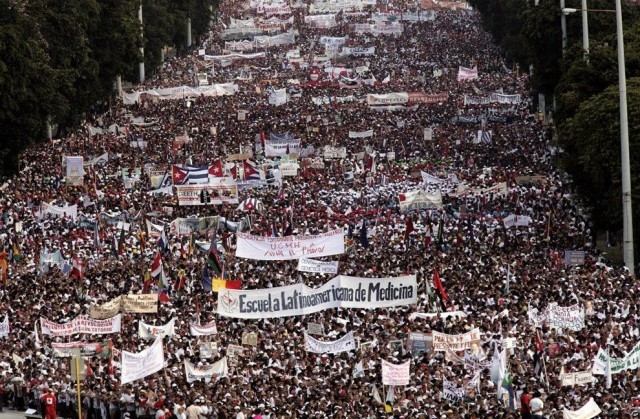 Of particular note was the unusually large labor delegation from the United States, composed primarily of elected union officials from East Coast and West Coast central labor bodies, many of them Black, Latino/a, women and youth.

Sung in Spanish, the “Internationale” rang out from the stands and sound system as the last marchers left the square.