Suicide rates in the U.S. have increased 24 percent since 1999, with nearly 43,000 suicides in 2014, and the pace of the increase is rising, reports the Centers for Disease Control and Prevention (CDC).

Factors examined by various studies and media reports have linked suicide increases with rising debt and unemployment, depression due to economic and social issues, mental health issues, discrimination, poverty and social isolation.  Teenage suicide “clusters” reported in the media have been linked to a rise in social media and cyberbullying.

Fred Goldstein describes how capitalists drive up profits at the expense of the workers in his Workers World article “Slowdown, unemployment plague world capitalism.” He identifies ways workers are becoming increasingly distressed: more work in less time for lower wages, below subsistence wages, burgeoning unemployment and exporting of jobs to oppressed countries where workers are paid even less. (April 23, 2015)

In her April 28 WW article “Verizon Workers Fight Back,” Kathy Durkin illustrates this current trend: “In the last decade, Verizon has cut its labor force by 40 percent. Workers hired after 2003 don’t have job security and now the company aims to eliminate the ‘no layoff’ clause for workers hired before then.” Verizon is outsourcing more jobs and attempting to reduce health care and disability benefits and freeze pensions. 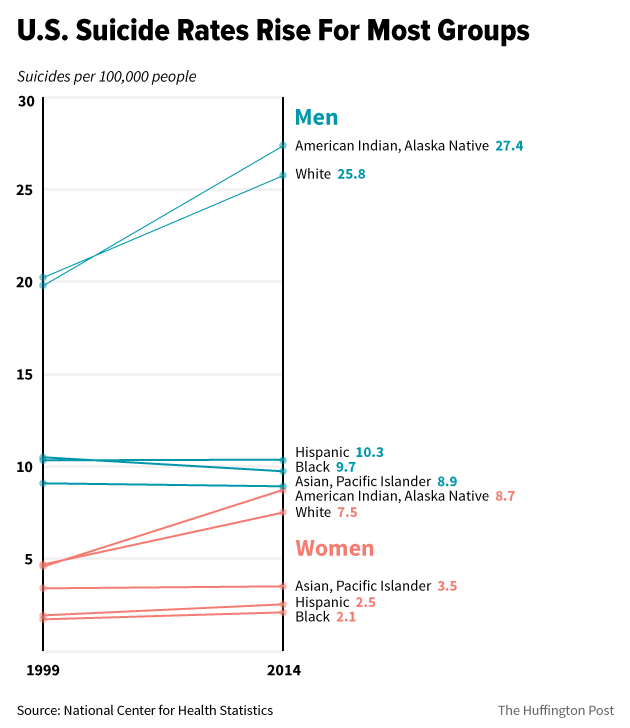 More than 14,000 of the suicides in 2014 involved middle-aged whites. Searching for a link between suicide in that group and financial insecurity and unemployment, a study by Katherine Hempstead at the Robert Wood Johnson Foundation concluded: “Efforts that target employers and workplaces as important stakeholders in the prevention of suicide and link the unemployed to mental health resources are warranted.” She found there was a sharp escalation in 2007 when the economic repression began. (pubmed.gov, May 2015)

The steepest increase among women was among the middle-aged, at 63 percent, says the CDC. Women face many economic hardships: They make only 79 cents for every dollar earned by men, and in middle age, they have a greater wage gap than that among younger workers. Also, single mothers make up one-quarter of U.S. households.

The sharpest rise in the suicide rate was found among Indigenous people, an already very oppressed group. There was an 89 percent increase among Native women and a 38 percent rise among Native men.

Last April seven teens on the Pine Ridge Indian Reservation committed suicide; this tragedy followed four suicides in the Navajo Nation in Utah. The Center for Native American Youth at the Aspen Institute says the suicide rate is double the national average among Native youth ages 15-24. They have the highest rate of suicide of any U.S. population group, and that rate is growing. (Indian Country Today, Oct. 13)

During a United National Indian Tribal Youth conference, Native youth blamed  “poverty entangled with a lack of jobs or access to mental health care for the high suicide rates, and federal government’s policies in the American Indian community made these conditions worse.” One youth said, “It’s kind of numbing, when there’s one every week. How do you address it?” (PBS Newshour, Sept. 30)

The CDC study showed that the suicide rate tripled for 10- to 14-year-old females; there were 150 suicides in that group in 2014. That is the second highest cause of death among adolescents, with the greatest increases found among girls in this age group.

The Cyberbullying Research Summary found that 20 percent of middle-school students reported that they seriously thought of attempting suicide and that all forms of bullying led to increases in suicide. (Hinduja & Patchin, 2010)

The vast majority of LGBTQ youth face harassment and bullying, including   physical violence, because of their sexual orientation, gender identity or gender expression. They are two to three times more likely to attempt suicide than other teens, says the Gay, Lesbian and Straight Education Network.

The U.S. Department of Veteran Affairs says there is a daily average of 22 suicides among Iraq and Afghanistan war veterans. Thousands of  veterans suffer from untreated post-traumatic stress disorder and substance abuse. “People need to understand that the impact of war is significant on the human psyche,” wrote Carl Lewis in the Feb. 18 issue of WW.