Thousands of migrants in Greece from the Middle East, Africa and Asia are being sent to Turkey in an effort to curtail and reduce the number of people flooding into Europe.

Uncertainty about the status of those who have reached Greece contributed to clashes on April 10 as Macedonian security forces used tear gas and rubber bullets to contain crowds they claimed had attempted to break through the Idomeni border between the two countries. Some 300 migrants and 23 security officers were injured. 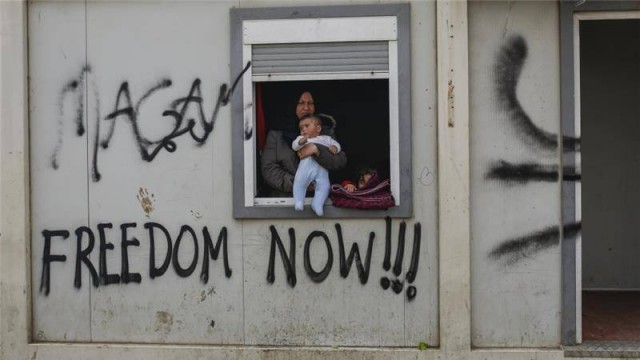 A woman with a child looks out from a container at a makeshift camp for refugees at the Greek-Macedonian border.

The Greek government denounced the Macedonian police for their actions, saying, “[T]he indiscriminate use of chemicals, rubber bullets and stun grenades against vulnerable populations, and particularly without reasons for such force, is a dangerous and deplorable act.” (Reuters, April 10)

This latest repression occurred just one day after four women and a child drowned off the Greek island of Samos. These were the first officially reported deaths in the Aegean Sea after the European Union began sending migrants from Greece to Turkey on April 4.

In response, the security forces involved in the attacks on migrants attempted to justify their repressive measures: “A large group of refugees attempted to destroy the razor fence and enter Macedonia. They threw stones, metal things and other objects toward police.” (Irish Times, April 10)

At least 11,000 migrants have camped out at the Idomeni village crossing since mid-February after the Balkan states closed their borders as major entry points into Central Europe. Reports say that approximately 50,000 migrants in Greece face possible deportation to Turkey.

Over the last year more than 1 million people have entered Europe, creating tensions among EU member-states and within their societies. Right-wing-led governments and political parties have utilized the migration crisis to build electoral support and escalate violence against those seeking asylum.

To normalize intra-Europe relations and curb migration, EU leaders reached an agreement with Turkey on April 5. Ankara will take back all refugees and migrants who enter Greece through irregular routes, like boats across the Aegean Sea. In return, the EU will accept thousands of Syrian refugees directly from Turkey via official immigration channels. The purported rationale behind this policy is to discourage migrants from entering Greece and its islands through passage provided by human traffickers.

Humanitarian organizations have criticized the plan, saying it will create even more problems related to the growing need to provide food, water, shelter and medical treatment for the hundreds of thousands still in need of assistance. The deteriorating conditions in the Idomeni border camp demonstrate this.

Agencies dealing with migration and displacement issues such as the United Nations High Commissioner for Refugees have also pointed out that the EU agreement violates international legal conventions for the processing of migrants and refugees. On April 1 several people were hurt on the island of Chios, which reportedly holds 600 more migrants than what the Greek authorities and international organizations have the capacity to handle.

The UNHCR’s humanitarian division observed that instability and anxiety were also escalating at the Moria facility on the island of Lesbos. Officially, 2,300 migrants are being housed there, exceeding the stated capacity of 2,000.

An April 1 statement from the UNHCR stressed: “[We are] urging parties to the recent EU-Turkey agreement on refugees and migrants to ensure all safeguards are in place before any returns begin. This is in light of continued serious gaps in both countries. Across Greece, which has been compelled to host people because of closed borders elsewhere in Europe, numerous aspects of the systems for receiving and dealing with people who may need international protection are still either not working or absent.”

What is not mentioned in many instances by corporate – and government- controlled Western media outlets are the reasons behind the flood of migrants and refugees. Those fleeing face dangers on a daily basis, after being trafficked through Libya and other countries, across the Mediterranean and into Europe.

At the root of the crisis are the United States and NATO wars of regime-change and occupation, along with the recent collapse of the economies throughout Africa, the Middle East and the Asia-Pacific.

Washington has led these interventions beginning with the Gulf war in 1991 and continuing through the occupations of both Afghanistan and Iraq since the start of this century.

Since 2011, the U.S. and its allies have waged new wars of destruction and occupation against Libya, Syria and Yemen. These wars have caused the dislocation, deaths and injuries of tens of millions of people. They have created the worst humanitarian crisis of internal and external displacement since the conclusion of World War II.

In addition, the wars have wrecked the economies of these targeted states and their neighbors. These wars of imperialist intrigue and domination are continuing amid the failure of a full economic recovery from the global capitalist crisis of 2008 and subsequent years.