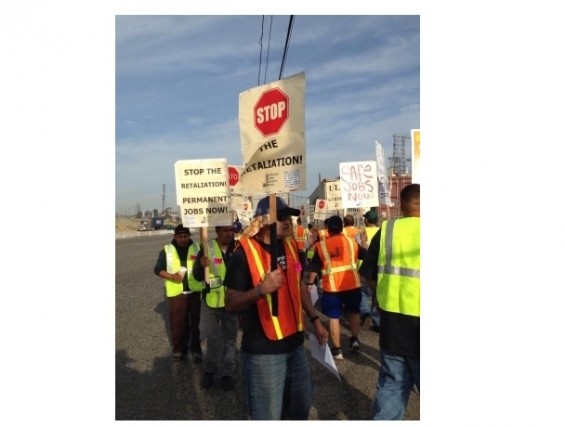 Warehouse workers at the Port of Los Angeles went on strike April 6 for the third time in seven months to protest the company’s ongoing violation of U.S. labor laws under the National Labor Relations Act. Over 200 workers employed through “temp” staffing agency AMR/SSI at California Cartage, the major warehouse for Amazon, Lowe’s and Kmart/Sears, were told April 4 their jobs were ending April 30. They countered by demanding the firm make them direct employees.

Working with the Warehouse Workers Resource Center, the workers’ concerns about health, safety and hostile working conditions were summarized in a 2014 class action lawsuit citing violations of Los Angeles’ living wage law. In November, they got the state Occupational Safety and Health Administration to issue citations against the company. “The retaliation we are experiencing has been ongoing,” said longtime worker Victor Gonzales, adding, “but our fight will go on, past May 1, until we win.” (warehouseworkers.org, April 6)

When 26,000 faculty members in the 23-campus California State University system organized to strike in mid-April for higher pay in a three-year contract, administrators at CSU blinked. This came after an independent report in late March supported the California Faculty Association’s demand for a 5 percent raise in 2014-15, countering the administration’s offer of 2 percent. The 5 percent increase takes effect June 30, followed by a 2 percent increase for 2015-16 on July 1. So salaries for tenured-track faculty, lecturers with temporary contracts, librarians, counselors and coaches will increase 7 percent this summer. During 2016-17, teaching staff will receive a 3.5 percent increase, with about half the staff receiving an additional 2.7 percent tied to years of service. The only concession was changing the requirement for vesting in the pension plan from five to 10 years.

“What the CSU faculty have done is historic. We avoided the largest strike in U.S. higher education ever,” said CFA President Jennifer Eagan, referring to CSU’s 460,000 student body. (AP, April 8)

Some 5,000 active and retired coal miners marched through the streets of Waynesburg, Pa., on April 1 to safeguard their jobs and pensions threatened when five coal companies filed for bankruptcy in 2015. When a company files for bankruptcy, it can petition the court for relief from paying pensions as part of its debt restructuring. This allows firms to back out of collective bargaining agreements, laying off workers and stealing pay they have already earned.

Coal miners, organized by the Mine Workers (UMWA), were bused in from neighboring states to demonstrate the power of organized labor and show solidarity. Mine Workers’ spokesperson Phil Smith said, “Our message is companies can file papers and judges can make decisions, but we’re the ones that make the decision whether to work under an agreement.” (powersource.post-gazette.com, April 1)

An important precedent was set in 2015 when Patriot Coal tried to nullify its collective bargaining contract through bankruptcy. The UMWA threatened to strike, forcing the company to negotiate a new contract with pensions mostly intact. (wvmetronews.com, June 3, 2015)

Equal Pay Day, April 12, marks the extra 103 days the average woman needs to work to earn as much as a white man during the past year. Though women are half the workforce and earn more college degrees than men, the typical full-time, year-round white woman worker only earns 79 cents to a white male worker’s $1. But women of color and mothers earn even less: Black women earn only 60 cents and Latinas only 55 cents, respectively, while mothers earn only 73 cents compared to fathers. The National Committee on Pay Equity notes that over the course of their working life, women stand to lose at least $250,000 because of such wage theft, which profoundly affects the quality of life of working families.

Every year women’s, organized labor and legal groups demand an end to this blatant discrimination and outright greed by capitalist companies. Even though the Equal Pay Act was passed in 1963, employers have not complied, so other bills have been passed, or are pending, to end this inequality. The Economic Policy Institute’s 12-point agenda focuses on the needs of low – and medium-wage women workers (most are women of color) to end this obvious form of ruling-class criminality.