They had tried hard to reach a fair contract for 10 months and were fed up. So, on April 13, nearly 40,000 Verizon workers went on strike in Washington, D.C., and nine East Coast states from Massachusetts to Virginia. It is the largest work stoppage in the U.S. since the two-week Verizon strike of 2011.

The Communication Workers and the International Electrical Workers, which represent the workers in Verizon’s landline and broadband FiOS operations, called the strike. The AFL-CIO has endorsed it and its members, community leaders and other forces are joining rallies and picket lines and sending messages of solidarity. Youthful supporters of presidential candidate Bernie Sanders are backing the strike.

The strike can spark an even wider struggle at a time when many sectors of the multinational working class are in motion, especially low-paid and oppressed workers like those in the “Fight for $15” campaign and at workers’ centers, fast food and big box stores. 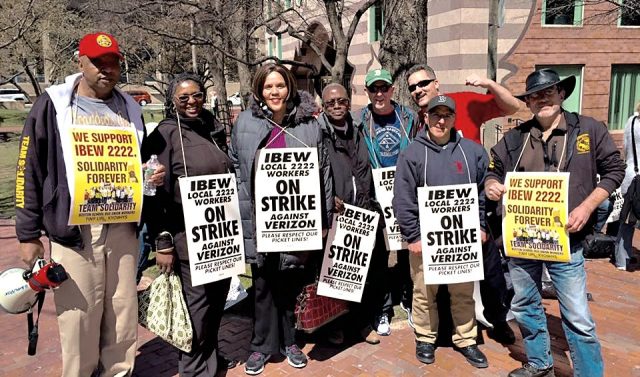 A lot is at stake for the workers. At its core, it’s job security: preserving good union jobs with livable wages and decent benefits, won by organized workers through hard-fought struggles. In the last decade, Verizon has cut its labor force by 40 percent. Workers hired after 2003 don’t have job security and now the company aims to eliminate the “no layoff” clause for workers hired before then.

Verizon aims to tear up the union contract and wrench disastrous concessions from the workers that would drive down their standard of living. Despite record profits of $39 billion over the last three years, executives seek to cut labor costs by transferring more health care costs to workers and retirees, reducing disability benefits and freezing pensions. Executives won’t discuss improving wages and working conditions. Instead, they would reduce overtime protections and make workers toil seven days consecutively.

Verizon plans to close and consolidate call centers, compelling workers to travel long distances daily or be laid off. In a major contract violation, the company aims to relocate workers up to 80 miles away from their current worksites for two months at a time, with no warning or right to refuse, disregarding seniority and family ties.

Verizon’s goal is to establish a traveling workforce of technicians who can be sent anywhere, anytime, to build FiOS networks and then move on to the next worksite. This is a key issue for the workers; their unions strongly repudiate job transfers. Moreover, dispersing workers dilutes their collective strength.

Verizon workers are angry that the company has stalled on its pledge to build the FiOS network, while discarding workers who install it. The corporation has violated cable franchise “build-out” agreements to set up FiOS throughout New York City and Philadelphia. This has left millions of people, particularly in low-income, African-American and immigrant communities, without access. It has neglected FiOS installations in several states while obstructing repairs of the older, copper network, leaving many customers with poor service.

The CWA says the company refuses to negotiate a fair first contract with better wages and benefits for Verizon Wireless retail workers — even though they formed a union in 2014. These employees bring in high profits, says Verizon — but are among the lowest paid workers at the company.

This is class war

On the strike’s second day, the CWA reported that in two separate incidents, three Local 2108 picketers in Maryland had been hit by cars driven by a Verizon attorney and a company manager.

Verizon has threatened to transfer technicians from Massachusetts to Virginia for 60 days if a contract is not ratified by May 20. Moreover, the company is being so intransigent that executives have ignored the unions’ offer of $200 million in concessions.

CWA and IBEW organizers met with Verizon representatives on April 15 to discuss the contract covering workers in six states and Washington, D.C. Showing their contempt for the workers, the executives refused to negotiate, demanded even more concessions from the workers and walked out after 30 minutes.

The federal government is looking to intervene before the strike grows and solidarity broadens. However, mediation after the 2011 strike resulted in a contract unsatisfactory to many workers. Verizon is eager for such intervention again, but the unions have repudiated it, saying that mediation “is a distraction to the real problem: Verizon’s corporate greed. CWA and IBEW bargaining teams have been ready, able and willing to bargain. Where’s Verizon?” (CWA, April 12)

In its drive for even greater profits, Verizon is squeezing the very workforce whose labor has created the corporation’s wealth and enabled its top five executives to receive “compensation” of $233 million over the last five years. The workers’ labor has created, produced and upgraded all the technology at Verizon.

The capitalist economic crisis continues. The bitter competition for profits between corporations at home and abroad is intensifying. In this cutthroat global scenario, bosses scheme to do whatever they can to drive down labor costs. The ruling class is in a war against unions, aiming for a nonunion, low-paid workforce without company-subsidized medical or pension benefits. This “race to the bottom” is a threat to the entire working class.

The Verizon strikers are fighting for their jobs — and in the long run for the rights of all workers to have good jobs with livable wages, benefits and a union. It’s time for all unions and other progressive organizations to join their picket lines and show solidarity.