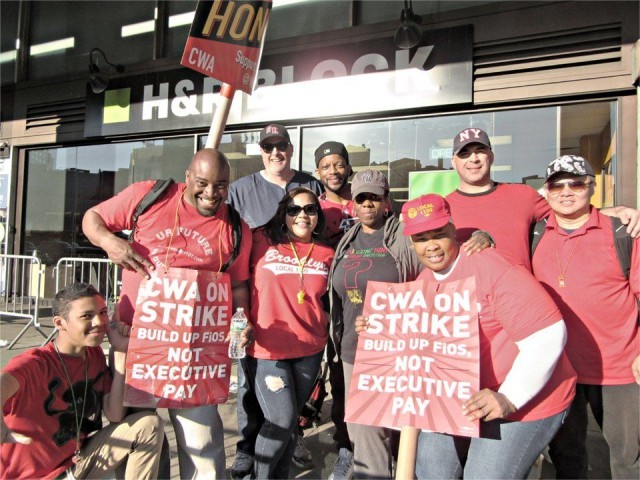 On April 13, 40,000 Verizon wireline workers, represented by the Communications Workers (CWA) and International Electrical Workers (IBEW), went out on strike against the company and its anti-union demands for cutbacks and concessions while it banks $1.5 billion per month in profits. Here are reports from some picket lines in Virginia and Boston.

Virginia: ‘United is how we roll!’

Members of CWA Local 2204, on the picket lines throughout Virginia, are standing strong against Verizon’s greed.

Beginning with rallies in over a dozen locations at 6 a.m. on the first day of the strike, CWA members from around the state — Arlington to Roanoke to Wise — came out to picket. The rallies looked like a sea of red T-shirts and strike signs.

“This strike is very important, not only for Verizon workers but all workers,” said Deb Casey, Norton Area Vice President, CWA Local 2204. “Verizon is a prime example of what is wrong in America and what is killing our economy. They are making $1.5 billion profit a month off the backs of their employees but want to freeze pensions, force retirees and workers to pay more for health care, outsource jobs, close call centers and transfer workers away from home and families for months at a time.”

Picketers have been out from 7 a.m. to 7 p.m. each day. Strikers have been joined daily by a variety of labor and community supporters. In Roanoke, members of 15 Now Roanoke, Roanoke Education Association, Citizens’ Convention, Food and Commercial Workers, firefighters, postal workers and bus drivers’ unions are among those picketing and providing other support.

A statement on CWA Local 2204’s Facebook page on April 17 read in part:

“As we enter Day 6 of this strike against the corporate greed at Verizon, we are humbled and thankful for the support we continue to receive at all of our picket lines. The kind gestures of food, coffee, water, honks and standing the line with us bolster our spirits and strengthen our resolve.

“The biggest of these gestures is the public stopping at our sites to ask exactly what we are fighting for because they want to hear directly from us. They are with us because they understand Verizon’s corporate greed and they know our fight is their fight.

“As upper management visited some of our picket lines yesterday they got a clear message that we want a fair contract that addresses our concerns. We continue to see the support of our fellow sisters and brothers from the labor movement who also understand our fight is their fight. They come to our picket lines and walk with us and offer their heartfelt support as Union family standing alongside us in our cause. We have entire families walking our picket lines together because they know we are all part of the CWA Local 2204 family. United in Solidarity Is How We Roll!!!”

Boston: ‘No union can go it alone’

“Our message is resonating, that’s for sure. Our members are strong.”

That was the conclusion reached by Myles Calvey, business agent for IBEW Local 2222, five days into the strike against Verizon. Calvey, who represents thousands of telecommunications workers in Greater Boston, explained the strike issues in great detail in an hour-long interview with WMBR radio on April 17.

Local 2222 members, along with all 40,000 striking Verizon workers, are angry about the company’s outrageous concessionary demands. They have seen the anti-union attitudes of the company intensify since the last Verizon strike in 2011. For the current management, including CEO Lowell McAdams, “The union has now become the poison within the company,” reported Calvey. “Every bad thing that happens, it is the union that caused it.” Union members are fighting for their jobs because Verizon wants “to converge on jobs. They want to cut, cut more jobs. We are just asking them to maintain jobs.”

Militant pickets have been seen all over the Boston area. Many union members have come out to show solidarity with the strikers, including firefighters, nurses and Teamsters. The Teamsters union sent all United Parcel Service drivers a text message instructing them not to cross picket lines. Honks of solidarity have been nonstop. Local 2222 is asking for community support, with the understanding that in 2016 no union can go it alone without support from the communities they serve.

Local 2222 has been joined on the lines every day by members of Steelworkers Local 8751, the Boston School Bus Drivers Union. By joining the picket lines the drivers are expressing their heartfelt solidarity, love and gratitude. During Local 8751’s bitter, 26-month fight to win reinstatement of four fired union leaders, as well as contract justice, Local 2222 turned over part of its union hall to Team Solidarity, the Voice of the United School Bus Workers — rent free. Nor has it been forgotten that leaders of Local 8751 were arrested while on the picket line supporting phone strikers in 1989.

“I wish all unions would be here to show solidarity and shut the city down,” said Local 8751 President Andre Francois.