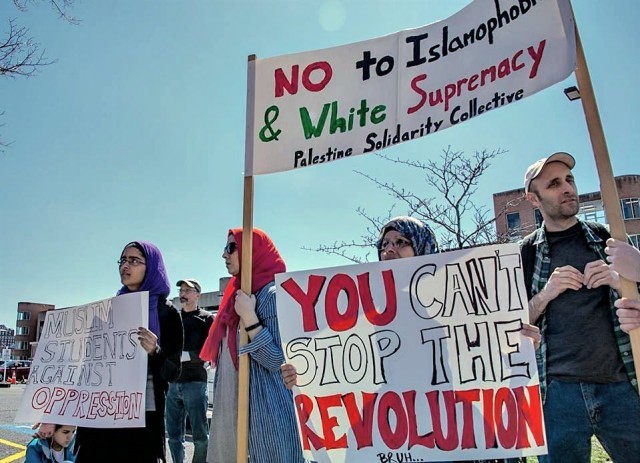 Syracuse, N.Y. — Right-wing presidential candidate and billionaire Donald Trump brought his strategy of hate-and-divide to central and upstate New York. Protesters, however, pushed back at every appearance.

In Rochester on April 10, hundreds lined the approach to Trump’s rally with signs like “Trump = Hate + Greed,” while young anarchists disrupted inside.

In Albany, Trump’s April 11 rally saw around a dozen protesters ejected, with one slugged in the face by a Trump supporter. Shouting protesters stayed in the street for hours after the rally’s end.

Two young African-American women, both high school seniors, were ejected from the April 12 rally at an ex-military base in Rome for objecting to racist remarks by Trump supporters.

Outside the convention site where Trump spoke, 400 people chanted, sang, drummed and gave speeches nonstop for more than four hours. A group of students from Syracuse University and SUNY College of Environmental Science and Forestry, some of them affiliated with Black Lives Matter, marched “down the hill” to join the rally. Rainbow flags waved for LGBTQ equality, pink placards supported Planned Parenthood. and three young women in hijabs held a banner against Islamophobia and white supremacy. The Malvinas, a local feminist “riot ­grrrl” band, kept the crowd energized with punk rock liberation lyrics.

Chants included “White supremacy’s got to go” and “No thugs, no KKK, no fascist U.S.A.”

Inside the convention center, a core group of activists waited three hours for Trump to appear so they could mount a ­major disruption. This writer was a mem­ber of that group. As Trump began to speak, several other individuals shouted “Trump is a liar!” or waved small banners with “No Trump” symbols and were ejected.

Resisting hate to the end

Outrage mounted in our group as Trump delivered his standard stump speech — the epitome of a capitalist crime. He began by lying about how many people were in attendance; the hall was actually only two-thirds full. He mendaciously promised jobs, while viciously dividing workers with racist slogans against African-American people, immigrants, Mexico and China.

He pushed the development of drones in the Syracuse area by a complex of university-military-industrial corporations.

Such robotics for war and profit offer nothing but more misery for the people of the world and for Syracuse. That city is the U.S. metropolitan area with the highest level of concentrated poverty for Black and Latino/a people. (“Architecture of Segregation,” tinyurl.com/j2u6tep)

Finally, our group unfurled its smuggled banner, “No RACISM,” and raised our voices chanting, “The people united will never be defeated!” We were 11 people in ages ranging from early 20s to almost 70, including several veterans, two mothers and at least one lesbian. Our group included people who were African American, East Asian, Latina, pro-Palestinian Jewish and anti-racist white. Among us were a health-care worker, a low-wage worker, a public school teacher, a retiree, a professional football player, students, immigrants and a disability rights activist. The group included members of Black Lives Matter, Palestine Solidarity Collective, Workers Center of New York, the Answer Coalition, Workers World Party and more.

Bringing the power of all our movements into action with us, we battled against the screaming audience and eventually were shoved by Trump security guards onto the street, our banner jerked from our hands, but our voices still raised for justice and liberation.

We were met with jubilation from those at the outside rally and joined them in resistance until the demonstration ended. Protesters stayed until Trump’s hate-painted campaign 16-wheeler drove away, not a single Trump supporter was left and only our signs remained on the barricades.

Buffalo activists are protesting Trump on April 18, followed by “Building an Antifascist Movement” on April 19, a forum sponsored by the Buffalo International Action Center.

Video footage of the Syracuse protest is posted on facebook.com/minniebruce.pratt.