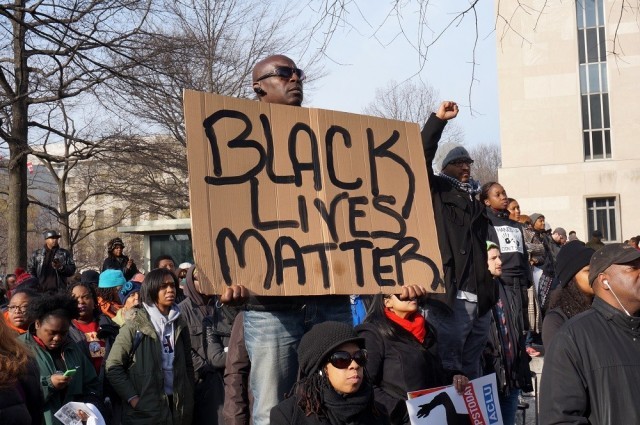 The protesters were able to unfurl three banners reading, “Clinton, you are the super predator,” “Clinton, what about mass incarceration?” and “Clinton = rich warmonger.”

The event was held at the City Garage, a venue founded by venture capital from both the city’s coffers and private enterprise. It’s located close enough to the trendy Inner Harbor, but not too far from Baltimore’s blighted neighborhoods. The rally attracted Clinton supporters from the suburbs, along with interlopers now living in downtown gentrified Baltimore. There were also both Black and white workers, mostly staffers, among the unionists who came from the Service Employees Union, American Federation of Teachers and National Education Association, which officially support Clinton.

A couple of the demonstrators’ action teams were able to get into good positions to protest, including seats close to the stage to make sure the protest would be noticed.

The atmosphere was that of an entertainment extravaganza, complete with loud music and large video images of Clinton that connected her with mass mobilizations at progressive events, whether or not she had been at them. None of those shown were anti-war demonstrations.

State and national politicians came out to harangue the audience with histrionic platitudes of Clinton’s glorious contributions to the “middle-class,” protecting them from Wall Street. The speakers, mostly local Democratic Party politicians, constantly reminded the crowd of the Republican threat to the “middle-class” and claimed that only Clinton could save the day.

When the candidate came to the stage, protesters unfurled their banners, which she obviously noticed, directing her surprised gaze at them. The protest group was immediately confronted by police and security. However, its members were able to hold their banners high and chant on the way out: “Clinton is a war criminal,” “Clinton murders Palestinians,” “Clinton calls Blacks ‘predators’” and “Clinton, rich warmonger.”

Programs harmful to the U.S. working class executed in the 1990s — the North American Free Trade Agreement, ending welfare under the cover of “reform,” the 1994 crime bill that lead to mass incarnation, especially of people of color — are all the responsibility of the Democratic Party and the Bill Clinton administration. Hillary Clinton has never separated herself from them.

As secretary of state her record is even more heinous, promoting the bombing and subsequent destruction of Libya and backing terrorist attempts to topple the Syrian government and demonize President Bashar al-Assad. She also backed the reactionary coup in Honduras, and still defends that action, which includes murders of many working people there. Not to mention the Clintons’ role in the pillage of Haiti.

It is only because Clinton is being challenged by Bernie Sanders’ verbal attacks on Wall Street that she has adopted some left-sounding phrases. But the Democratic Party, despite its support from unions and from people of color, remains a party of U.S. imperialism that serves big capital, just as the Republican Party does. Hillary Clinton is its favored candidate. Exposing her role and that of the two-capitalist-party system at her rallies is a step forward.