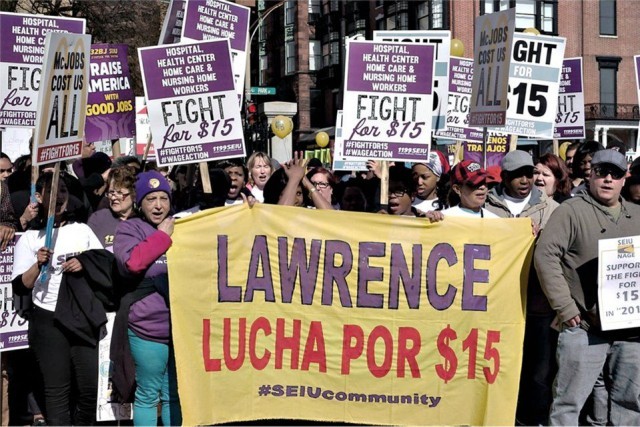 On Thursday, April 14, workers in Atlanta, Boston, New York, Los Angeles and more than 300 other cities across the U.S. — as well as in 40 other countries, including south Korea, the Philippines, Chile, Panama, Pakistan and Brazil — walked off their jobs and/or joined marches and protests in what organizers said was the largest protest by low-wage workers in history.

Some 60,000 workers took part in the U.S. “Fight for $15” demonstrations, according to organizers. They called for the right to collectively bargain and a minimum wage of $15 an hour, more than twice the current U.S. federal minimum of $7.25 and many times higher than in most countries. Many of the international actions were directed at McDonald’s. McDonald’s CEO Steve Easterbrook raked in $7.91 million last year — more than tripling the $1.67 million he “earned” the previous year.

California and New York have both recently passed legislation to raise the minimum wage to $15 through a “phase-in” period over several years. Undoubtedly, this is to give the capitalists the time to seek ways to increase their superprofits made from the exploitation of colonized and oppressed nations, so that the wage increases for their workers do not come out of their own pockets. This is why real internationalists must also raise the demand of a global minimum wage or basic minimum income!

Low-wage workers at Boston’s Logan International Airport, home care and child care workers, adjunct professors, religious leaders, immigrant and housing advocates, legislators and the Black Lives Matter movement joined with striking fast food workers for a rally at the Massachusetts State House organized by the #wageactioncoalition, the Service Employees Union and other unions. They marched through downtown Boston to McCormick & Schmick’s and McDonald’s to build solidarity with workers there struggling against poverty wages and poor working conditions.

Bills are pending in Massa­­chusetts to raise wages to $15 an hour for about 1,500 service employees at Logan Airport and over 200,000 workers at fast food and “big box” retail chain outlets across the state. 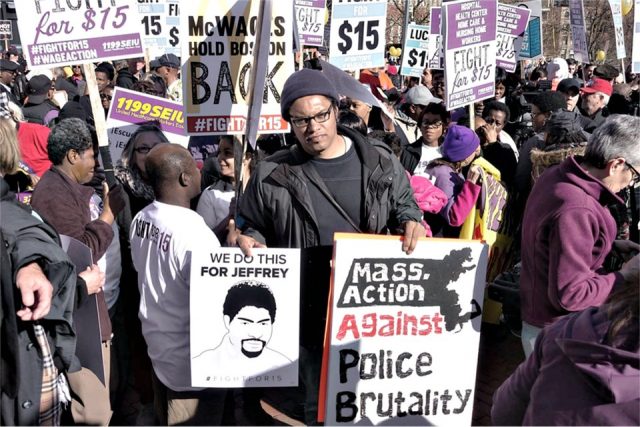 A rally also addressed the struggle for justice for Jeffrey Pendleton, a Black 26-year-old homeless man who had worked for a Burger King in Nashua, N.H. He participated in a fast food worker strike and was active in the Fight for $15 movement. After Nashua police arrested him on a minor offense, he was sent to the notorious Valley St. Jail in Manchester, N.H., not far from Donald Trump’s campaign headquarters. Pendleton was too poor to afford the $100 bail that would have set him free.

Pendleton had been harassed by police because he was homeless and had won money settlements from both Hudson, N.H., and Nashua police departments last year, with support from the ACLU, although much of the settlement money went to paying lawyer fees.

Shortly after his imprisonment, Pendleton was mysteriously “found dead ” in his jail cell on March 13. The circumstances resembled those of the internationally known case of Sandra Bland, a Black woman active in the struggle against police brutality who was “found hung” in a Texas police cell three days after being arrested for failing to signal when changing lanes.

Over 1,000 low-wage workers descended on Chicago’s “Magnificent Mile” on the evening of April 14 after having spent most of the day on the North Side near the Loyola University campus, an action which included a shutdown of an entrance to Lake Shore Drive. They began a second set of marches under heavy police presence in one of the wealthiest areas of Chicago — outside Park Tower, where Ken Griffin, CEO of Citadel LLC and Illinois’ wealthiest person, keeps a penthouse apartment. Citadel has owned and traded millions in McDonald’s stock over the years, raking in huge profits. The workers stopped briefly at a Bank of America office to chant, “Banks got bailed out! We got sold out!” The financial giant controls more than $2 billion worth of shares in the fast food chain. (chicagoist.com)

In Los Angeles, protesters held aloft large balloons and marched behind a banner that read, “McJobs hurt us all.” In New York, thousands rallied in Times Square and later protested outside a Republican gala featuring the party’s three candidates for the 2016 presidential race.

Howard Rotman contributed the New England portion of this report.