April 12, 1966. Fifteen young women and men slipped into the New York Stock Exchange. They didn’t belong there. They had no money to invest in stocks, nor did they care if the market was down or up that day.

They had another purpose. They had informed a few reporters that they were planning something dramatic, asking the reporters to keep the action secret. The young people hoped to make their move before police or guards could stop them.

Although a war was on and both Vietnamese and U.S. troops were dying, the only weapons these youth carried were leaflets and banners. They were sending a message.

On the trading floor, hundreds of brokers were staring up at the Big Board that showed up-to-date information on all the important stocks. The 15 young people moved to the edge of the balcony that overlooked the arena of frantic trading. On a signal, some threw leaflets 30 feet down to the floor while three others unfurled a banner right across the Big Board.

A sudden silence was followed by a collective howl from below as the brokers read “Stop the War in Vietnam” and, in bigger letters, “Big Firms Get Rich, GIs Die.”

“GI” was the popular term for a lower-ranking enlisted or conscripted person in the U.S. Armed Forces. Its use began in the 1930s, apparently from the military jargon referring to all sorts of equipment: “General Issue.” By 1966, some 200,000 of these GIs, mostly from the Army and Marines, were in Vietnam fighting a war against the Vietnamese people.

Lyndon Baines Johnson was president of the United States. Following a supposed confrontation between North Vietnamese patrol boats and U.S. destroyers in the Gulf of Tonkin in August 1964 that was later exposed as faked by the Pentagon, Johnson gained Congress’s authority to escalate U.S. intervention in the war. Johnson planned to increase the number of U.S. troops there to 380,000 by year’s end and finally to 540,000.

Toward the end of March 1966, there were peace marches in New York, Washington, Chicago, Philadelphia, Boston and San Francisco, numbering at most in the tens of thousands. Their dominant slogans were pacifist: “End the war,” “Negotiate Now.” 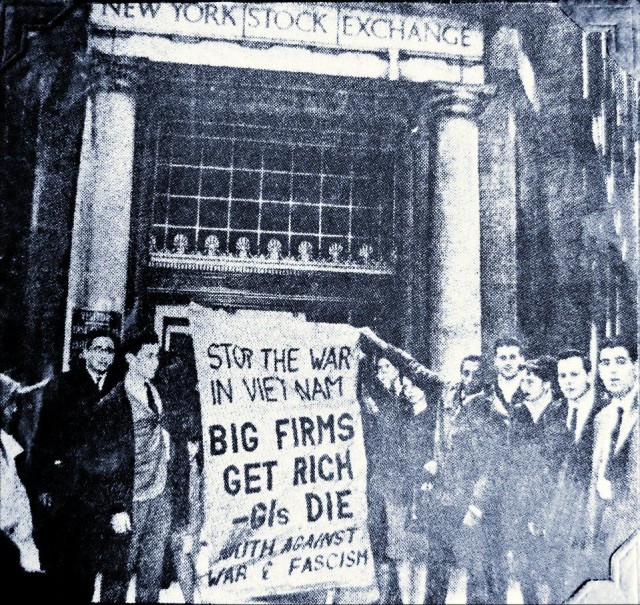 The young people at the Stock Exchange had a clearer view of the war, shaped by the gut revulsion they felt when seeing photos of Vietnamese peasants burned to death by napalm bombs that Dow Chemical manufactured. They knew the Vietnamese were determined to fight until they won. They were also sympathetic to the rank-and-file U.S. troops who were drafted or induced to enlist and then sent to die so that the stockholders of companies like Dow Chemical would grow richer.

The slogan, “Big Firms Get Rich, GIs Die,” reflected an ideology. The ideology condemned the U.S. war against Vietnam as a bosses’ war. It was fought for their profits. These were the profits of the military-industrial complex, but also the profits of all the bankers and superrich who wanted to keep exploiting workers all over the world.

The GIs were working-class youth used as cannon fodder; that is, they were sent to kill and die to expand the interests of the rich.

The slogan’s delivery also expressed an attitude: In your face. The Stock Exchange traders picked up on this attitude and, taking no chances, they soon had a hard, transparent wall installed on the balcony to separate future visitors from those trading in the blood money of the big firms.

Implicit in the slogan was an approach toward the GIs themselves. These young protesters were active in Youth Against War and Fascism, the youth organization of Workers World Party. They considered the ordinary soldiers and sailors — Air Force, Coast Guard, Marines and Women’s Army Corps members; and WAVES (Women Accepted for Volunteer Emergency Service) — to be their class brothers and sisters.

In April 1966, most of the YAWF members could not imagine how quickly so many GIs would break with their early anti-communist indoctrination and resist the war machine. Nor did these youth realize how soon they would begin to help organize the American Servicemen’s Union.

Breaking the chain of command

Over the next nine years, hundreds of dissident, mainly anti-war newspapers were published by GI groups. Half a dozen were regularly published newspapers with four to eight tabloid pages. The most consistent was the newspaper of the American Servicemen’s Union, “The Bond,” which was published monthly for most of the period from 1967 to 1974.

Dozens of smaller sheets were published by ASU chapters. They all reflected a widespread and heartfelt rebellion, as did the many hundreds of other newspapers and newsletters.

Even a voice from the Pentagon had to admit that the GI resistance had become an enormous problem for the generals. A little more than five years after that Wall Street demonstration, a provocative article entitled “The Collapse of the Armed Forces,” by military historian Marine Lt. Col. Robert Debs Heinl, was to show how much the GIs had broken with military indoctrination.

In the article, Heinl wrote, “By every conceivable indicator, our army that now remains in Vietnam is in a state approaching collapse, with individual units avoiding or having refused combat, murdering their officers and noncommissioned officers, drug-ridden, and dispirited where not near mutinous.” (Armed Forces Journal, June 7, 1971)

By 1968, hundreds of Black troops were refusing riot-control duty in U.S. cities. By 1970, whole units on active duty repeatedly refused to go on offensive missions in Vietnam.

If pushed too hard by their officers, sometimes one or more of the troops would kill the officer. This practice gave birth to a new verb, “to frag,” because often the elimination of the officer was carried out by rolling a fragmentation grenade into his tent. In 1970, exactly 109 fraggings occurred in Vietnam, according to Lt. Col. Heinl.

Within a year of the Stock Exchange protest, many of the 15 young people had turned their ideology and attitude into concrete acts of solidarity with the lower ranks of the armed forces. They were protagonists in this history of the struggle by GIs and their supporters to resist the war within their own organization — the American Servicemen’s Union.

This article is adapted from a chapter in Catalinotto’s forthcoming book, “Turn the Guns Around: Mutinies, Soldier ­Revolts and Revolutions.”