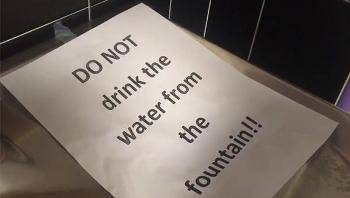 Nearly half the schools in Newark, N.J., were temporarily shut down on March 9 when elevated levels of lead were found in the drinking water.

Responding to a lack of funding and community control, Larry Hamm, chairman of the People’s Organization for Progress (POP), told Workers World, “We are outraged at the discovery that schools in Newark had unacceptable levels of lead in the water.” He said POP is “calling upon the state and the federal government to do what needs to be done to clean and purify public school water.”

Mayor Ras Baraka said: “A lot of our buildings are old. That speaks to infrastructure, the reason why we need new schools.” (AP, April 1)

Hamm said it was “ironic” that at the same time the story broke that children in 11 New Jersey cities had higher levels of lead in their blood than children in Flint, Mich. (myCentralJersey.com, Feb 3), POP was holding a demonstration condemning the lead poisoning in Flint’s water.

Newark schools tested above the Environmental Protection Agency’s safe level for lead of 15 parts per billion.

State officials took over the management of Newark schools in 1995 after the Abbott vs. Burke ruling mandated that the state fund 28 “unconstitutionally substandard” urban school districts at the same level as the state’s wealthiest districts. Newark’s schools are among the poorest in the U.S. and many buildings are over 100 years old.

Hamm said that due to lack of money, children were still being denied a thorough education. With state funding has come state supervision of the schools, taking power out of the hands of the communities. “The state was to supervise the schools for five years,” he said, “but 20 years later they are still in control. The state appointed its own superintendent with veto power over the school board.” The schools were supposed to improve, but the reality is that conditions have gotten worse. Hamm said the situation was comparable to that in Flint, where after the city went bankrupt, the state took over and administrators, to save money, switched the water supply from the Detroit reservoir to the highly polluted Flint River.

In 2003, the EPA offered to help monitor lead levels in Newark public school water, but city officials rejected the EPA proposal, claiming the city already had a plan to install new fountains and lead filters. Part of the city’s plan was to have school employees run the water for 30 seconds before children came to school. However, school staff and community organizers said those rules were not consistently enforced. Many teachers said they were never told to run the water and that water filters, which need replacing every six months, had not been changed in five years. (WNYC, March 17)

In 2002, when dangerously high lead levels were found in schools in Camden, N.J. — another poor, majority Black city — bottled water was provided at a cost of $75,000 a year. Fourteen years later, instead of the lead pipes being replaced, Camden students are still drinking bottled water. And now, Newark students and staff are getting bottled water for drinking and to prepare food in the cafeteria.

Schools just tip of the iceberg

Older housing units in Newark also have lead pipes or lead soldering within pipes, which leaches into the drinking water. Lead poisoning can also be caused by lead-based paint found in old housing units and in soil along highways, even though the U.S. banned leaded gasoline in 1996.

According to the Centers for Disease Control and Prevention, about 24 million dwellings in the U.S. have deteriorated lead paint, which contaminates house dust. Eating lead paint chips is dangerous but swallowing or breathing contaminated dust or soil causes the most insidious lead poisoning. Once these small particles get into the body, they are easily absorbed.

Children living in older housing are at greatest risk. In Newark, more than 30 percent of the housing was built before 1950. Levels of lead in paint were as high as 50 percent. Lead-based oil paint was banned for use in housing in 1971. (Childhood Lead Poisoning in New Jersey Annual Report, 2010)

Monica Moorehead, Workers World 2016 presidential candidate and a New Jersey resident, points out that “Newark is the most populated city in New Jersey with the second-highest poverty rate.” Those with the lowest incomes live in the oldest housing, where their health is compromised by lead paint and pipes. People who are better off have moved to newer homes in the suburbs.

Children and developing fetuses are at the greatest risk of lead poisoning because their growing bodies absorb and retain lead more easily. Children with poor diets, lacking nutrients like calcium, absorb lead more easily. Each year in the United States, 310,000 children ages one to five years old test positive for unsafe levels of lead in their blood. (Kidshealth.org)

Chronic exposure to small amounts of lead causes neurological and behavioral damage that may be irreversible: reduced IQ, shorter attention span and problems with social interactions. Lead poisoning also causes anemia, hypertension and problems with the renal (kidneys), immune and reproductive systems. High lead exposure can cause coma, convulsions and even death. Lead damage to red blood cells limits the amount of oxygen they can carry to organs and tissues.

Lead is stored in teeth and bones, where it accumulates over time and may be released back into the blood during pregnancy, where it can be absorbed by the fetus. Most lead ends up in the bones, interfering with the production of blood cells and the absorption of calcium.

Districts and teachers are often blamed for children not performing well in school when, in fact, this problem can reflect the effects of lead poisoning, economic inequality, environmental racism and an imposition of state control. What’s needed is money for new housing and water pipes, and community control of the agencies that affect people’s lives.

City Council member Eddie Osborne said Newark should act fast and hire an environmental consultant to perform the study, and that Newark residents “cannot wait for a state or federal agency to return our phone calls for answers.” He said, “We need our own consultants, our own access to data and solutions, and we need it now!” (NJ.com, March 21) n