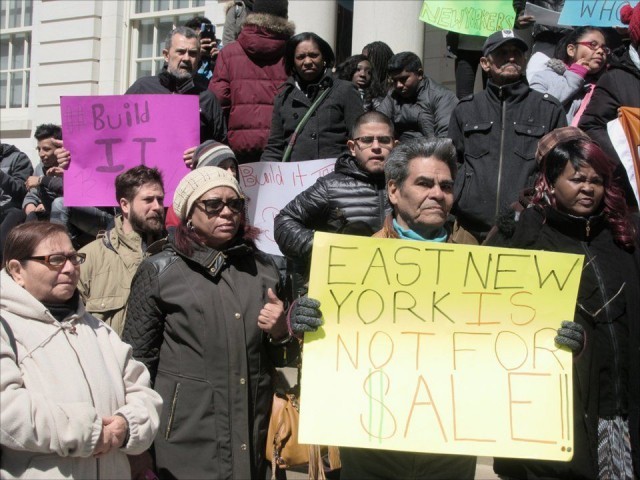 March 30 —“Luxury high-rises are being built in our neighborhoods; rents and property taxes keep going up and up; and long-term residents are being displaced! This is why the Brooklyn Anti-gentrification Network is fighting to change the city charter to make community boards elected, not appointed, and to give them veto power!” said organizer Alicia Boyd.

Speaking today at the entrance to Brooklyn’s City Hall, Boyd was among activists throughout the city who see their community boards powerless to stop developers. The gentrification of the city has a racist character, which was protested at the rally and covered by local news outlets.

New York City’s Mayor Bill de Blasio recently chose to ignore that most community boards don’t approve of his deal with developers to rezone. Developers claim that affordable housing is offered in 20 percent of the high-rise apartments now displacing housing for working-class families. Speakers today explained that alleged affordability is fixed on the income of wealthy neighborhoods. De Blasio’s term “affordable” sounds good, but isn’t applicable for most Brooklyn neighborhoods where people of color have waged many battles to obtain housing in recent decades.

BAN is using street rally tactics, including going door to door and holding town hall meetings. The protesters’ determination was heard in the chant “Whose city? Our city!”

A few days later, more than 100 East New Yorkers met at a community church on a bitterly cold April 3 to ride the long distance to Manhattan’s City Hall. There, they appealed to a mayor who boosts an affordable housing plan that is really a plan of, by and for real estate developers — not for the working class and people of color. Speakers explained their plight in different ways as the large crowd of East New Yorkers covered the wide steps leading to the City Hall entrance.

They had the support of a Latina tenant leader from the southwest Bronx who spoke about demanding a “No” vote to rezoning their East New York neighborhood that would require only 3 percent of 6,000 new units to be affordable. The mostly Black and Brown tenants in the area are mostly low income.

Chants included: “Hey de Blasio, where we gonna go?” “Hey hey, ho ho! Luxury condos have got to go!” “What’s not for sale? East New York!” and “Our community! Our plan!” Speakers mentioned with pride a fair housing plan that these tenants have developed.