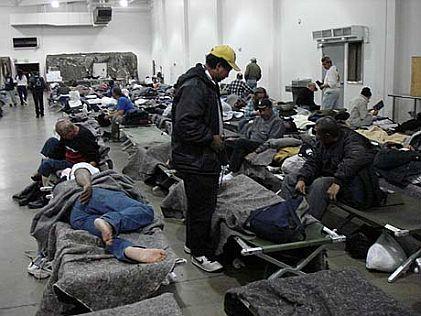 Nearly 24,000 children sleep every night in New York City municipal shelters, according to the Coalition for the Homeless. But not a single child is homeless in socialist Cuba.

That’s enough dough to build 10,000 apartments at $200,000 apiece, which could house most of New York City’s homeless children. But there isn’t any profit doing that.

Ironically, it is both luxury housing and slums that make the most money for landlords and banks. The first family of New York’s “high society,” the Astors, were the biggest slumlords in the Western Hemisphere.

The owner of the Milwaukee trailer park where author Matthew Desmond lived while writing “Evicted, Poverty and Profit in the American City” rakes in $400,000 a year.

Under capitalism, even items absolutely essential to human life like housing or food have to be sold for a profit. If the capitalists could bottle the atmosphere, they would sell it to you.

President Franklin Roosevelt declared in 1937 that one-third of people in the U.S. were “ill-housed.” Millions of sharecropping families were living in shacks.

Strikers occupied the GM plants in Flint, Mich., as FDR spoke. Many people knew about the Soviet Union’s socialist five-year plans that built entire new cities, like the steel town of Magnitogorsk.

Public housing began to be built in the United States in the late 1930s, but it wasn’t to the liking of the real estate lobby.

McCarthy and the landlords didn’t have to worry. There were plenty of dead presidents to be made from the housing shortage following World War II.

Senator Robert Taft — who co-sponsored the union-busting Taft-Hartley bill — was also responsible for the 1949 Housing Act. Taft was such a right-winger that he attacked the prosecution of Nazi war criminals at Nuremberg.

Moses had 7,000 mostly Puerto Rican families evicted to construct Lincoln Center for the Performing Arts on Manhattan’s Upper West Side. Many more people were displaced by highways he had constructed, like the Cross-Bronx Expressway.

As many as 500,000 people were thrown out of their homes by Robert Moses, according to “The Power Broker” by Robert Caro.

His Housing Authority refused to turn the heat on in some projects until the outside temperature dropped to 20 degrees. (New York Daily News, March 31, 2015)

Developer William Levitt kept Black families from buying houses when he started Levittown on Long Island in 1947. As late as 2009, the Census Bureau estimated that less than 1 percent of the 53,000 people living there were African American.

Neither did Metropolitan Life Insurance allow Black families into its Stuyvesant Town complex on Manhattan’s Lower East Side.

MetLife was a cash cow for the Rockefeller dynasty. During the Great Depression, MetLife President Frederick Ecker approved a $40 million loan to start building Rockefeller Center.

Lee Lorch and Grace Lorch were evicted by MetLife for inviting the African-American Hendrix family to live with them at Stuyvesant Town. Grace Lorch was later one of those comforting Elizabeth Eckford, one of nine Black students trying to integrate Little Rock’s Central High School in 1957. (New York Times, March 1, 2014)

African Americans were also frozen out of 12,000 apartments at MetLife’s Parkchester complex in the Bronx until after Dr. King was assassinated in 1968.

Only struggle forced the LeFraks and Trumps to open their apartments and cooperatives to Black and Latino/a families in Brooklyn and Queens.

According to the National Low Income Housing Coalition, there’s a national shortage of 7.2 million apartments and homes that poor families can afford. Over 450,000 families in New York City pay at least half their income on rent. (cbcny.org)

One of the Cuban Revolution’s early achievements was limiting any family’s combined rent and utility bill to only 10 percent of their income. Mansions were taken over to house poor people.

There’s a housing crisis in the United States, but there’s no housing shortage. Millions of apartments and homes are kept off the market by speculators and banks.

We need to take them over, like poor and working people in Cuba did. Zeckendorf’s condos in New York City should belong to homeless children and their families.