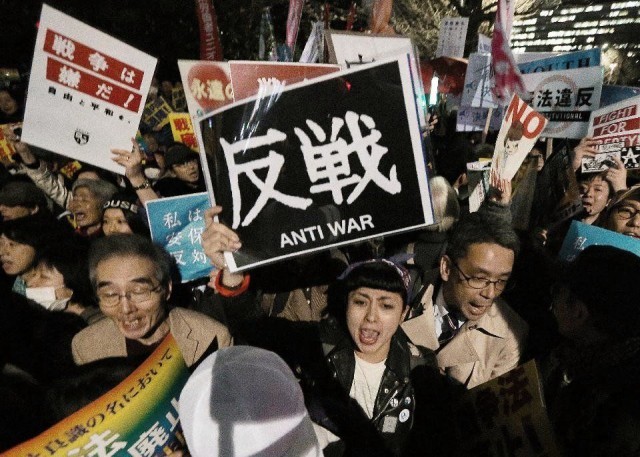 The rules will allow Japanese imperialism to use its military in a more aggressive way than at any time since 1945, under the pretext that an ally of Japan is under attack or that Japanese lives are threatened. Although U.S. imperialism imposed a pacifist-leaning constitution on Japan following its victory in World War II, Washington has currently urged the Japanese government to expand its military role in East Asia.

Washington’s strategy envisages Japanese and south Korean forces operating under U.S. leadership while confronting China and the Democratic People’s Republic of Korea. This is much like the way British, French and German armed forces operate in Europe under NATO command — which is always U.S. command. The U.S. has been especially provocative toward north Korea (DPRK), refusing to finally sign an agreement ending the 1950-53 war and normalizing relations.

In the late summer of 2015, when plans for this new militarization were first announced, more than 100,000 Japanese and Okinawans demonstrated against them. Okinawa is an island group 400 miles south of the main Japanese islands, with a non-Japanese population and the lion’s share of U.S. military bases. It is a center of anti-war activity directed against both the Japanese and the U.S. military machines.