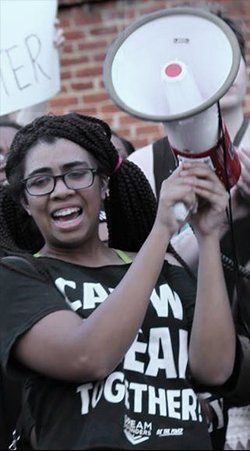 The day that Gov. Pat McCrory and North Carolina’s General Assembly approved House Bill 2 was the first anniversary of the suicide of Blake Brockington, a black trans teenager in Charlotte.

I only had the privilege of meeting Blake, the first Black trans teen to win homecoming king in North Carolina, once. We were at the first Trans Pride event in the state. He had a 100-watt smile, taught me a new line dance and spoke bravely about his dreams, his visions of freedom and his story. He died later that year. I bet my bottom dollar that not a single one of the legislators who passed HB 2 has ever even heard his name.

On the morning that HB 2 was passed, I sat in a committee of the General Assembly with several other trans and queer people of color who are part of our statewide #BlackLivesMatter coalition, listening to white woman after white woman take the podium and criminalize our existence. Straight, cisgender (nontrans) white women gave tearful, plaintive speeches about the threat of the “transvestite sexual predator.” They called trans women “men in dresses” and spoke at length about their “fear” of being attacked in the bathroom.

White trans women affiliated with big-name nonprofits like the Human Rights Campaign, Equality North Carolina and the American Civil Liberties Union were allowed to speak briefly on the ways the bill would affect them. Many pointed to their own “respectable” bodies, post-gender-affirming surgery and hormone therapy. These women bragged about how well they passed as cis and implored the General Assembly to admit them into the cult of white womanhood and see their lives as worth protecting.

No one spoke the name of Angel Elisha Walker, a 20-year-old Black trans woman found dead in Johnston County, N.C., a year before. Her family reported her missing nearly a year before police found her burned-out car in a field, and then discovered her body buried in a shallow grave behind a house near Smithfield.

No one spoke Blake Brockington’s name.

As I sat in the General Assembly with a strong crew of trans and queer warriors, listening to the scapegoating of trans women (and trans people in general) for the violence of sexual assault, I felt triggered and violently abandoned by people who claim to be a part of my community.

I sat beside close friends and fellow members of the #BLM QTPOC coalition, fellow trans survivors of sexual assault, who had all signed up to give public comment and speak on the bill. Not a single one of us was allowed to speak. When I got up to demand we be given the time to speak that had been promised us and said that the General Assembly — which was costing taxpayers $42,000 to hold that special session — could not refuse to hear from trans people of color, I was grabbed by police officers and escorted out of the building.

As the governor signed the bill in the dead of night, we took to the streets. Our coalition, consisting of member groups from Durham, Chapel Hill, Greensboro, Charlotte, Winston-Salem and other cities across North Carolina, released a public statement that night calling for a “People’s Special Session” in the street outside Gov. McCrory’s mansion, in the name of Angel Elisha Walker and Blake Brockington.

Here’s what we had to say:

“This bill undermines municipal democratic control, advancements in anti-discrimination policy and further prohibits wage increases. [It] is a direct assault on working families and particularly working women of color, who are most likely to be paid poverty wages. LGBTQ folks of color are workers, and we are worth more! [It] uses trans panic and the scapegoating of trans women to derail real conversations about safety and consent. Trans and queer people are survivors of sexual assault, too. Our safety matters, and we don’t make our community safer by threatening others with the brute force of the murderous police or incarceration. …

“We honor and fight for Blake by affirming that our lives matter. Anti-transgender bias and legislation and persistent structural racism directly impact the devastating rates of suicidality, unemployment, physical and sexual violence, poverty, incarceration and homelessness experienced by transgender people of color. … Trans and queer people of color demand a living wage and freedom from criminalization and discrimination, in the workplace and in the bathroom.”

But we know all too well that words are not enough. With a critical mass of more than 2,000 people from across the state, we took Blount Street and created a circle of protection around five queer and trans organizers who chained themselves together in the street in an act of civil disobedience. We read the collective statement issued by the coalition, and invited trans and queer people of color to participate in a People’s Special Session, where they could share their stories of struggle and visions for a path towards liberation.

We occupied the street for more than three hours, despite assaults on our bodies by the Raleigh police department. The five queer and trans warriors who committed civil disobedience that night were arrested as thousands chanted: “Revolutionary love, love, love!” and “We gon’ be alright!”

The fact that queer and trans people of color and Black folks have led the fight against HB 2 has been erased from local and national media. Despite our coalition’s tireless work to center the voices of trans people of color as we organize against this racist and transmisogynistic legislature, our stories, our demands, and our needs are once again being drowned out and left behind.

I have been a part of this broad coalition since August 2015 and have consistently watched the corporate gay Pride movement leave us behind, and erase its roots in the militancy of Black and Brown trans women’s struggle against criminalization and police brutality. The so-called mainstream gay movement has a long history of investing in and accepting sponsorships from corporations that profit off the incarceration of people of color and facilitate the gentrification that displaces us from our homes — building cupcake shops and luxury condo complexes over historic queer community spaces. These corporate behemoths that sponsor Pride festivals around the country also finance and fuel U.S. military invasions of countries in the global south.

I have borne witness to how the mainstream corporate gay rights movement has glossed over its radical roots in the unapologetic militancy of Marsha P. Johnson, Stormé DeLarverie, Sylvia Rivera and so many other trans people of color unsung and unnamed.

And as my fellow trans and queer people of color wage what is literally a battle for our lives, I have watched us be forgotten, ignored, pushed to the margins of the fight against HB 2 in North Carolina. But the truth remains: We started this movement, and we remain and will always be at its vanguard.

That is why Rivera’s words at the 1973 Christopher Street Liberation Day rally ring sharp and resonant in my ears, echoing my current reality from four decades earlier:

QASIMA WIDEMAN is a mixed Black, gender-nonconforming and gay artist and community organizer from Durham, N.C. They organize with Muslims for Social Justice and the #BlackLivesMatter QTPOC Coalition of NC and work as a professional political educator.