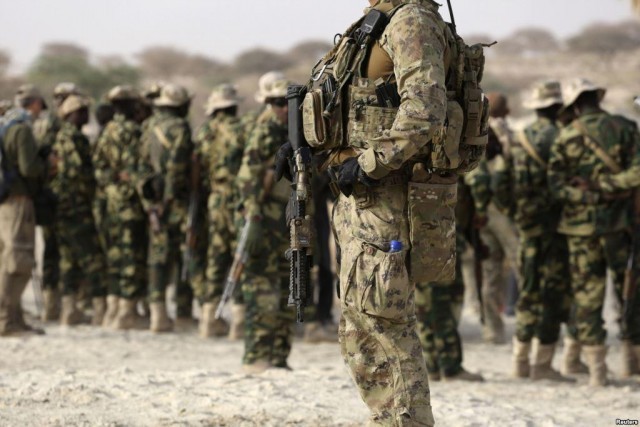 At a briefing with U.S. Secretary of Defense Ash Carter on March 25, Joint Chiefs of Staff Chairman Joseph Dunford told the press that “the secretary and I both believe that there will be an increase to the U.S. forces in Iraq in the coming weeks.” (CNN, March 25)

This statement from the top military officer confirms signals that the Pentagon is planning a new escalation of military intervention in Iraq 13 years after the U.S.-British invasion in March 2003 and five years after the incomplete pullout of U.S. troops.

CNN reported that a U.S. defense official told the news agency that the U.S. currently has “between 4,500 and 5,000 troops in Iraq on a regular basis, about 1,000 over the stated limit of 3,800,” including “200 Special Operations Forces whose presence is not publicly ­acknowledged.”

Just days before this announcement, the U.S.-led “coalition” carried out a bombing raid on Iraq’s second largest city, Mosul, home to 1.5 million people, targeted because it has been run by Islamic State forces for more than a year. The “coalition” consists of more than 60 countries backing the Iraqi regime, including NATO countries and the Gulf monarchies, but most of the actual bombing is done by the Pentagon.

According to an interview with Iraqi scientist Dr. Souad Naij Al Azzawi in the German daily newspaper, Junge Welt, on March 31, the March 19-20 attack on Mosul occurred in the middle of the day, which she “can only interpret as that they were intentionally planned and directed against the population, against civilians. This is a war crime.”

Dr. Al Azzawi Naij said the bombers “used bunker-busting weapons. This destroyed the main building of the university, the Science College, the Women’s College, the students’ dormitories” and other civilian buildings. “So far from what we know, 90 people were killed and another 155 injured.”

This year the anniversary of the 2003 U.S.-British invasion — which was based on imperialist lies about non-existent “weapons of mass destruction” — fell just as the U.S. was bombing Mosul and two days before the bombing in Brussels. The number killed in Mosul was more than twice that killed in Brussels, although it was barely reported in the corporate media in the imperialist countries.

In her remarkable March 29 article in TruePublica.org.uk commemorating the 2003 invasion, anti-war British journalist Felicity Arbuthnot pointed out it was the anniversary of “the biggest terrorist attack in modern history … the illegal invasion and destruction — ongoing — of Iraq.” (tinyurl.com/z3nmg92)

“March 20,” the journalist continued, “marked the thirteenth anniversary of an action resulting in the equivalent of a Paris, Brussels, London on July 7, 2005, often multiple times daily in Iraq ever since. As for September 11, 2001, there has frequently been that death toll and heartbreak every several weeks, also ongoing.”

Reliable sources state that 1.5 million Iraqis died during the invasion, the ongoing occupation and the internal fighting provoked by the U.S., British and other occupying powers. Another 5 million were driven into internal and foreign exile. The Islamic State group would never have existed in Iraq without this invasion.

If the Pentagon and the administration of President Barack Obama are planning an escalation of U.S. forces in Iraq to conquer Mosul and other cities in the north, anti-war forces in the U.S. will need to confront this challenge — to bring it to the streets and to all the meetings involving the upcoming national elections.