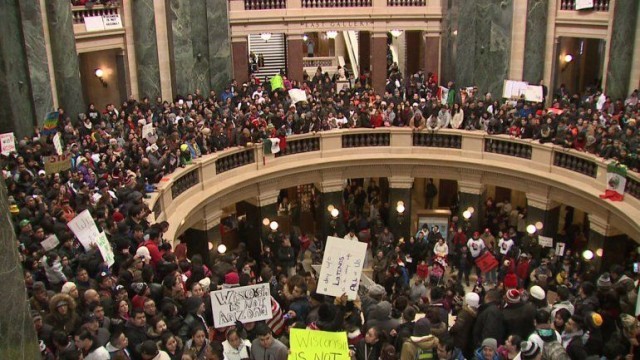 Milwaukee — Due to mass statewide resistance by immigrants and their allies, an “anti-sanctuary” bill in the Wisconsin Senate was not taken up for a vote before the politicians adjourned for the year.

In a March 16 statement the immigrant and worker rights organization Voces de la Frontera wrote: “Last night the Wisconsin State Senate adjourned for the year without taking up Assembly Bill 450, a bill that would lead to more cases of racial profiling and strengthen the collaboration between local law enforcement and immigration agents. The Senate’s decision comes at the end of three months of organizing by immigrant and Latino communities across Wisconsin, that culminated in A Day Without Latinos and Immigrants, a statewide general strike and mass mobilization on the State Capitol on February 18, 2016.”

Voces continued: “AB450 is one of three anti-immigrant bills introduced in the legislature in this session. Another bill to impound the cars of people stopped for driving without a license was never brought to the floor. A final bill, SB533, to take away counties’ ability to provide local photo identification cards to residents — as Milwaukee County created a program to do — was passed by both chambers of the legislature before the mass mobilization that garnered international attention.”

Voces, the group Youth Empowered in the Struggle and many other organizations are demanding Wisconsin Gov. Scott Walker veto SB533. Hundreds of representatives that attended the last day of the Senate session delivered a petition with over 15,600 signatures to the governor calling on him to veto the bill. If the governor neither signs nor vetoes the bill, it will become law automatically on April 27.

“In the wake of the Day Without Latinos and Immigrants, we are witnessing a political awakening of the Latino and immigrant community in Wisconsin,” said Christine Neumann-Ortiz, executive director of Voces de la Frontera.

Added Neuman-Ortiz: “The mass general strike was an undeniable statement of the essential and positive contributions that immigrants make to our economy and our society. This is a breath of fresh air in the face of the belligerent, right-wing extremism that is contaminating our political debate and causing a disturbing uptick in hate crimes, including the recent murders in Milwaukee of a Puerto Rican father and Hmong parents in front of their children. Following this historic day, we have been able to grow our organization statewide to continue the momentum toward strengthening the voice of Latinos and immigrants in Wisconsin.”