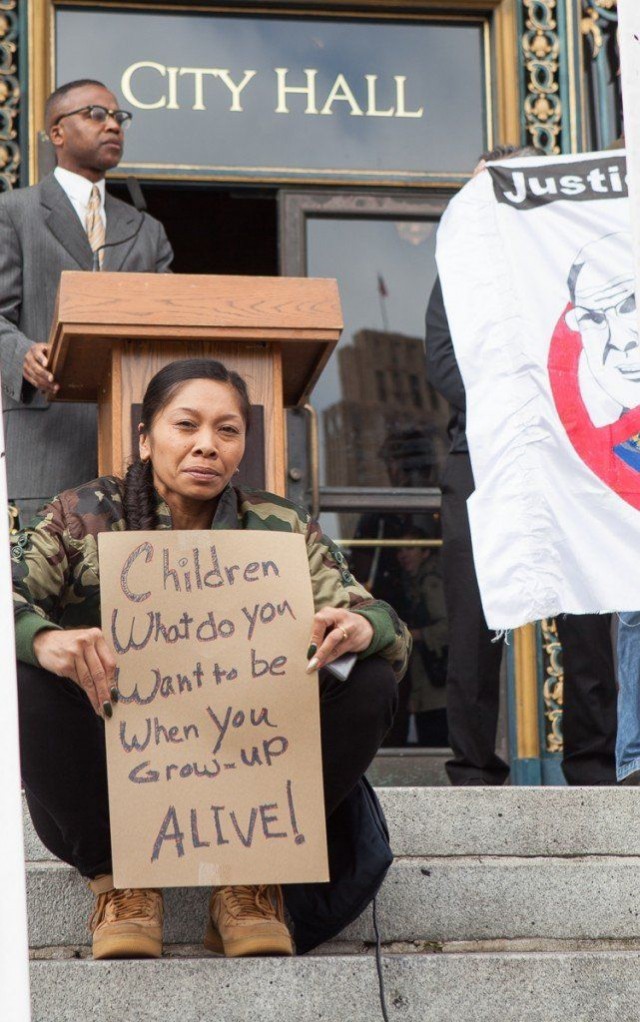 San Francisco’s Black and Latino/a communities came together March 18 on the steps of City Hall to launch a united campaign to end police impunity in the officer-involved murders of Mario Woods, Alex Nieto and Amilcar Pérez López.

“This historic press conference has now married the struggle, the sacrifice, the sacred blood of Mario, Alex, Amilcar, Kenny Harding Jr. and a host of others” killed by police, said Christopher Muhammad, minister of the Nation of Islam. “Now we want to ‘marry’ [historically African American] Bayview-Hunters Point, and the Mission [home to many Latino/a communities], the Fillmore. We want to put the ring on and celebrate marriage, so that what happens in one community is the concern of all communities. …

“Our position is: These officers must be fired and charged with murder — not involuntary manslaughter. … This is called murder, with malice and forethought,” Muhammad said.

The new Black & Brown United Coalition coalesced after the shocking March 10 exoneration of police in a federal civil trial in the killing of Alex Nieto, 28, by a jury on which no Blacks or Latinas or Latinos had been selected to serve. Nieto was killed in 2014 in a hail of 59 police bullets while eating a burrito on Bernal Hill as he was getting ready to go to work. People were also outraged that, within hours of the acquittal, one of the police shooters, Officer Roger Morse, tweeted a gloating response to the verdict, in what many interpreted as a threat to Nieto’s family: “How about burning down his house and tazing his friend who pressed charges?”

“It’s about Black and Brown coming together,” said Oscar Salinas of the Amor for Alex Coalition. “[With this verdict] they made us stronger. They have woken up a giant in San Francisco. And guess what? They hide behind a code of blue silence, and we have to break this down.”

Felicia Jones, a member of Service Employees union Local 1021, said: “We stand together to fight as one, Black and Brown together, for justice for three young men, [aged] 28, 26 and 20, shot over 105 times by the police. We are telling San Francisco, you will not get away with murder.” Citing the over 3,000 lynchings of Black people between 1880 and 1964, she said that in 2015 alone there were over 1,000 police killings in the U.S. “We must not be afraid to fight the powers that be,” she said. “They want us to be divided, but we’ve been talking, we’ve been sharing, we’ve been loving on each other. When you get married, it’s till death do us part.”

Brother Daniel, from the Justice 4 Mario Woods group, said, “The only reason they’re listening to us at all, is because they see the Black, the Brown, the white, the poor coming together to challenge this city.” John Avalos and David Campos, members of the San Francisco Board of Supervisors, also spoke, demanding an end to impunity in the police killings.

Two young Black musicians performed a slow, moving rendition of Sam Cooke’s, “A Change is Gonna Come,” while a woman held up a sign that read, “CHILDREN — What do you want to be when you grow up — ALIVE.”

Developers decide that Bayview and the Mission are to be white

Many speakers connected the police killings with the wave of displacement and gentrification in Black and Brown communities. Minister Chris Muhammad said San Francisco “has a policy of hiring rogue cops from other departments. If you show you are heavy-handed, quick-triggered and you police in Antioch, Vacaville, Fairfield — if you show you are willing to kill a Black or Brown — you can come to San Francisco and get a pay raise.

“Because the developers have determined that Bayview/Hunters Point is to be white. The Mission is to be white. … So they send their shock troops, their Gestapo-minded police, to come in looking for any old excuse to shoot first and ask questions somewhere down the line.

“Remember now, this is not Mayor Trump, not some Republican administration,” Minister Muhammad continued. “San Francisco is a Democratic city, with a Democratic mayor, a Democratic Board of Supervisors, a Democratic governor and attorney general. … But when you get elected to public office, you’ve got to fit into a construct, where people make apologies for the big downtown developers.”

Ratcheting up the heat in a big-money Democratic city

“At the end of the day, when it comes to justice for Black and Brown, you get the same response as you got from former Gov. George Wallace in Alabama,” Muhammad said. “Chief [Greg] Suhr can lie to the world [about the police killings] and keep his job. Officers can write Ku Klux Klan-like text messages and keep their jobs. An officer can threaten Alex Nieto’s family with burning their house down and keep his job.

“This is an election year, and this is a big-money Democratic city. But we aim to ratchet up the heat. We have no reason to be silent. What the hell, it’s better to fight the power knowing we got an enemy who’s taken his mask off. We don’t need to be faked out with tricks and maneuvers. We want our supervisors to be angry as hell and fire some of these rogue cops.

“Fire Chief Suhr. … We’ve got to heighten all the contradictions today. The beauty of this movement is none of us is looking for a grant. You can keep your damn money, we don’t want it. You can’t compromise us with an offer of a job. I got a job. My job is to fight for justice for Mario, Alex and Amilcar.”