As the Zika-carrying mosquito, Aedes aegypti, hits Puerto Rico, new evidence reinforces the disease’s link to two neural disorders, microcephaly (small heads) and Guillain-Barré syndrome. Inside the continental United States, Zika is expected to arrive in April or May. 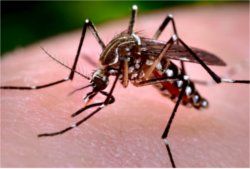 The Centers for Disease Control and Prevention says that, already, 193 travel-related, sexually transmitted cases have been identified. Worst hit is Florida, with 48 Zika cases, including four infected pregnant women.

In February, four times the number of people in Puerto Rico contracted Zika than in previous months, a jump of over 117 cases. Just back from Puerto Rico, CDC Director Thomas Frieden said, “With the rainy season approaching we could [see] an explosive increase in … the spread of Zika [and] dengue and chikungunya” — diseases carried by Aedes aegypti.  (CDC Newsroom, March 3)

A surge of children with these disorders will add to the strain on Puerto Rico, which, like Brazil, is facing an economic crisis. Zika is arriving when the country has a 40 percent jobless rate, a $73 billion debt, and faces bankruptcy.

There are 100 CDC staffers working in Puerto Rico, trying to control the Zika outbreak. They are testing insecticides in several areas because mosquito resistance varies so greatly. Frieden said: “Part of the challenge … is that few disease carriers have proved more resilient — or more deadly to humans — than Aedes aegypti.

“Until Zika,there has never been a mosquito-borne virus that could cause serious birth defects on such a large scale,” said Frieden.  The CDC is scrounging funding from different sources, but he hopes “Congress will provide resources for a robust response.” (Washington Post, March 4)

Emergency funding is also necessary for vaccine development by the National Institute of Allergy and Infectious Diseases.  “The more we learn, the worse things seem to get,” said Director Anthony Fauci, M.D. “We need to step up to the plate.” (Post)

The U.S. Congress, led by right-wingers, is refusing President Barack Obama’s request for $1.8 billion in emergency funds for mosquito control and vaccine development.  Instead, they call for reallocating money designated to fight Ebola! Funds are drastically needed to deal with both the Ebola outbreak — and the Zika crisis. There is enough money to do this: Congress could “reallocate” funds earmarked for the Pentagon or corporate subsidies.

The Zika Readiness Action Plan Summit is scheduled for April 1 at CDC headquarters, where the Obama administration and health officials will discuss establishing a coalition of federal, state and local leaders to coordinate the control of and response to Zika’s spread.

Only 20 percent of Zika sufferers show any of its mild flu-like symptoms. However, new studies show that the virus may target particular nerve cells. A Zika infection in early pregnancy may cause infants to be born with microcephaly, with incomplete brain development. An infection later in fetal development may cause mental illness that appears further along in an infant’s life.

Hengli Tang and his research team at the University of Florida are the first to show that Zika targets fetal brain cells associated with microcephaly. The virus slows these cells’ development and uses their reproductive mechanisms to produce more Zika virus.  (John Hopkins Medicine, March 4)

Tang’s co-worker, neuroscientist Guo-Li Ming, said, “While this study doesn’t definitively prove that Zika virus causes microcephaly, it’s very telling that the cells that form the cortex are potentially susceptible to the virus, and their growth could be disrupted by the virus.”  The team will study how Zika interferes with brain development and screen for drugs that will block it, using a High Throughput Screening device to test millions of compounds simultaneously.

Dr. Ian Lipkin and his team at Columbia University’s Center for Infection and Immunity are investigating the link between mothers who contract viral diseases in pregnancy and neural disorders in their children later in life. Lipkin said he wouldn’t be surprised at “a big upswing in A.D.H.D., autism, epilepsy and schizophrenia. … We’re looking at a large group of individuals [in Latin America and the Caribbean] who may not be able to function in the world.” (New York Times, Feb. 18)

Scientists found evidence of microcephaly in the aborted fetus of a woman who had contracted Zika during her pregnancy’s first trimester. The fetus had calcified brain tissue and its brain was smooth with no characteristic folds for a fetus that age. The  virus’ entire genome was found in the fetus’ brain tissues. The virus had targeted and delayed the growth of brain, spinal cord and eye cells, and kept growing and replicating within those cells. (New England Journal of Medicine, March 10)

On March 9, Brazil’s health ministry confirmed 104 more cases of microcephaly in the country, the epicenter of Zika infections. At least 641 Brazilian babies have been born with the condition since October, a recent sharp increase.  Authorities are investigating 4,222 other cases, largely in the country’s impoverished northeast.

Guillain-Barré syndrome is a rare neurological disorder that can cause nerve damage, paralysis or even death. Many infections may trigger it, including Zika. Brazil’s health ministry reported a surge in GBS sufferers who had contracted Zika. Five weeks after the 2013 Zika outbreak in French Polynesia, the number of GBS cases jumped from about two a year to 42. Scientists investigated these 42 cases; 41 carried Zika antibodies. (NEJM, March 9)

Next: Peparing for the Zika virus; Puerto Rico and Cuba.