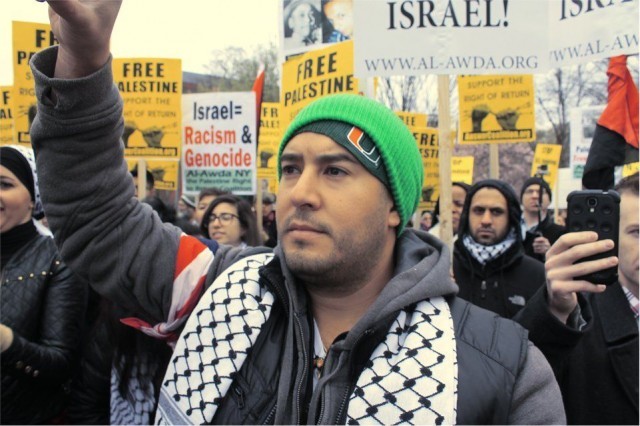 By David Card and Colleen Gillan

Washington, D.C. — The American Israel Public Affairs Committee held its annual conference in Washington, D.C., on March 20-22. AIPAC is a racist, Zionist organization of the richest and most powerful politicians in the United States and Israel. They meet every year to collude on deals that benefit the state of Israel, which the U.S. government is all too happy to grant so long as Israel continues to colonize and destabilize the entire Middle East.

The primary target of Israeli aggression and occupation is the people of Palestine. Palestine is the nation on which the entire state of Israel was constructed. Since 1948, when Israel was declared and millions of Palestinians were driven from their homes, the Palestinian people have never stopped resisting.

On the afternoon of March 20, hundreds of supporters of the Palestinian people gathered outside the White House to show their outrage at the annual meeting of AIPAC. Some came from as far away as Australia and the Korean peninsula. Protesters then marched to the Washington Convention Center, where AIPAC was holding its meeting. Among the chants were “From the river, to the sea, Palestine will be free!” and “When people are occupied, resistance is justified!”

Outside the convention hall, protesters blocked all available doors and challenged people trying to get inside the convention. At least one fight broke out in which a Zionist attacked a pro-Palestine demonstrator. The police predictably attacked the demonstrator, who had just been assaulted, instead of the Zionist who had attacked him. The police then protected the Zionist from the angry crowd and ushered him into the building, showing which side they are on.

Militant street demonstrations such as this, combined with the Boycott, Divestment and Sanctions movement, which calls for not buying goods and services that come from or support Israel, have greatly increased pressure on Israel in recent years. The movement to recognize the right of the Palestinian people to national self-determination won’t stop until they have achieved victory.