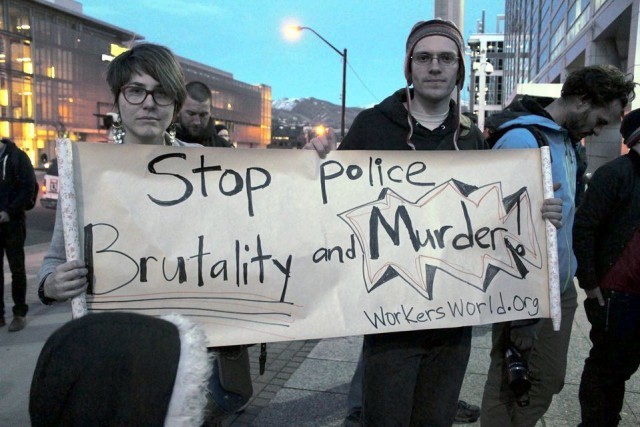 Salt Lake City, Utah — A diverse group of Salt Lake City activists gathered at the City County building on March 18 to protest the presence of reactionary GOP front-runner Donald Trump, whose racism, sexism, xenophobia and exploitation of his employees have all been exposed.

Organizations as diverse as Students for a Democratic Society, Utahns Against Police Brutality, Utah Anti-War Committee, Students for Justice in Palestine, Socialist Alternative, Teamsters Local 222 and Freedom Road Socialist Organization all spoke at the event. A common theme of the speeches was that the organizations of workers, students, the LGBTQ community, and oppressed nationalities ultimately are the ones with the power to stop Trump’s reactionary movement.

Next came a march with chants of  “Whose streets, our streets!” and “El pueblo unido jamás será vencido.” More people joined, eventually reaching around 3,000. The march then began pushing up against the barriers and blocked the entrance, delaying the arrival of “The Donald” by about an hour.

Protesters began chanting, “When immigrants are under attack, what do we do? Stand up, fight back!” Pigs fully clad in riot gear emerged and began pushing back against the crowd.

Tensions have been rising between the community and the police, especially after the recent shooting of 17-year-old Abdi Mohammed. A pushing match ensued instigated by the cops and reactionaries leaving the event. “You guard fascists”! some demonstrators shouted and took turns hitting a Trump piñata.

Because of Trump’s vicious attacks on immigrants, Utah’s Latino/a community has begun mobilizing in a way not seen since the huge marches in 2005 and 2006 calling for amnesty.

After Trump left, cops tried to trap some demonstrators, but the people held together and got out. No arrests were made.

More people are realizing that in capitalist society the cops aren’t neutral. They act as enforcers of an increasingly disintegrating social order. These are the “bodies of armed men” that Marx spoke about. This fact has been more painfully obvious to oppressed communities. How this plays out remains to be seen but we can say with certainty that the people will continue fighting. With humanity and the very planet at stake, how can we not?