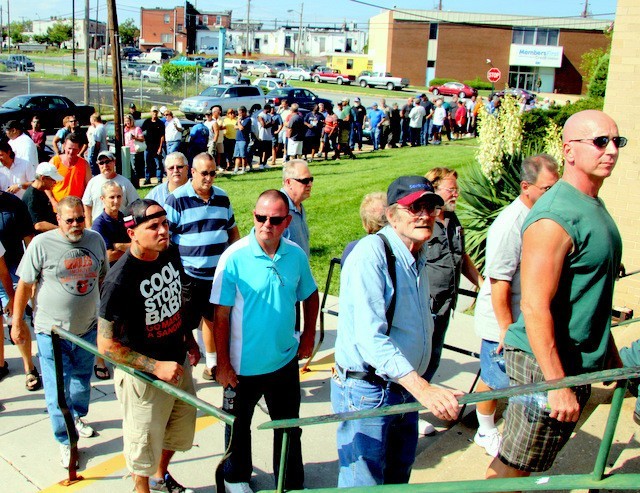 Some 1,350 retirees, members of the United Steelworkers union, have won their battle against the giant Renco Group to get their full pensions.

The Pension Benefit Guaranty Corp., a federal agency, announced on March 4 that Renco must restore all the pension money due these retired workers since 2012, when R.G. Steel went bankrupt and Renco, R.G. Steel’s owner, cut off their pensions. The PBGC took over at that time and made much-reduced pension payments to the workers, but it also sued the conglomerate Renco Group for $70 million in pension obligations. (nytimes.com, March 5)

The settlement means that Renco must also pay back the federal government for its pension payments to the R.G. Steel workers. Although it was the PBGC that negotiated the settlement, it was pressure by the union workers and their supporters that won the victory.

The Renco Group owns mines and factories around the globe. Its owner, Ira Rennert, is a billionaire with a palatial seaside home, known as Fair Field, on Long Island. The largest occupied mansion in the U.S., it is currently valued at $248 million — more than the pension money Renco had denied the R.G. Steel workers.

Renco is well-known to Workers World newspaper. The company sued us in 2006 for writing that Renco was robbing the workers of another company, WCI Steel in Ohio, of their pensions, also through a bankruptcy maneuver. Despite an army of Renco corporate lawyers, the judge dismissed the suit.

When, under pressure from the union and supporters like WW, the PBGC threatened to seize Rennert’s Fair Field mansion to pay for the pensions, Renco backed off and made up the pension shortfall to the WCI retirees.

Typically, when a subsidiary of a conglomerate like the Renco Group declares bankruptcy, the conglomerate is obligated to pay the workers’ pensions. But in the recent R.G. Steel case, Renco schemed to avoid this obligation, according to the PBGC.

Renco bought the financially troubled steel company in 2011 for $1.2 billion and then sold a 24.5 percent stake in it to Cerberus, a private equity firm. It told the PBGC that this was done to avoid declaring R.G. Steel in bankruptcy.

But shortly thereafter, in 2012, R.G. Steel did declare bankruptcy. As Renco now owned less than the 80 percent “cutoff” stake at its subsidiary, it claimed it could cut off the pensions of the steel company’s workers, leaving the PBGC to make much-reduced pension payments. That’s when the government agency sued Renco for fraud.

Pensions are not gifts to the workers from corporations or government agencies. They are deferred wages, designed to supplement Social Security so workers can maintain a steady, secure standard of living through their retirement years. They are the product of countless struggles against the bosses, private and government. Pension funds are the property of the workers.

Government worker unions in particular have negotiated somewhat lower wages than private industry unions in order to get more money placed in pension plans. These pension funds become obligations that the bosses must pay.

But for decades, corporations and their political minions have connived to reduce and eliminate these pension obligations and replace them with stock market investment plans, like the 401(k) program. Then the workers, not the companies, assume all the risk, while brokers rake in billions in commissions.

Millions of workers found that their plans’ savings evaporated in the Great Recession. Many have not recovered from that catastrophe.

Economist Teresa Ghilarducci explained it this way: “In America, when we had disability and defined benefit plans [pensions], you actually had an equality of retirement period. Now the rich can retire and workers have to work until they die.” (nbcnews.com, March 23, 2015)

As with Renco, Wall Street is constantly hatching plans to gobble up the workers’ pension plan funds.

In 2015, 12,000 Detroit city retirees, many of them African Americans, found their pension payments cut by 6.7 percent. On top of that, many of these same retired workers must pay back tens of thousands of dollars to the pension fund for so-called “excess interest” that they received.  This is aptly called “clawback,” as the state government and courts gouge the retired workers’ meager income in order to hand over millions of dollars to Wall Street bankers.

This occurred despite a provision in the Michigan Constitution that guarantees full pensions to state and local government workers.

All this comes on top of the campaign by Wall Street political hacks in Congress to reduce Social Security benefits and increase the retirement age.

As the capitalist crisis continues to unfold, every worker who has retired or plans to retire has a stake in the struggle against Wall Street’s drive to steal from and eliminate pensions, hoodwink workers into shady investment schemes, and discard older workers, particularly oppressed workers, into lives of abject poverty.