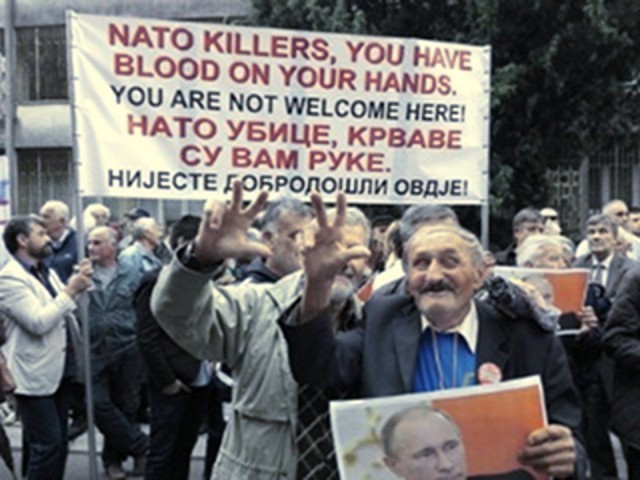 In 2000, the same NATO forces destabilized what remained of Yugoslavia — the republics of Serbia and Montenegro — then overthrew its political leader, Slobodan Milosevic, later imprisoning and trying him in a pro-NATO court in The Hague, Netherlands, for alleged war crimes. Failing in its attempt to convict him, the court case ended when Milosevic died there on March 11, 2006. Many suspect NATO forces had him poisoned.

NATO’s pattern for the destruction of Libya and Syria — and also of Iraq and Afghanistan, with variations — was based on the experience in Yugoslavia:  demonization of a leader, with false charges of “ethnic cleansing” to give a pretext for a NATO “humanitarian intervention,” followed by slaughter of civilians from the air and destruction of the infrastructure.

While the Soviet Union existed, Yugoslavia was an independent and relatively prosperous country. With no Soviet Union after 1991, Yugoslavia was vulnerable to the powerful imperialist countries in Western Europe and the United States, which provoked and exacerbated disputes among the various Yugoslav peoples.

Although Germany, France, Britain, Italy and the U.S. had competitive interests in Yugoslavia, these imperialist powers joined to destroy the multinational state of more than 20 million people and break it into seven small and weak states that would become mini-colonies of the NATO powers.

In 1991 German imperialism, following its annexation of the German Democratic Republic, supported secessionist puppet regimes in Croatia and Slovenia. Germany also led NATO’s backing of one side of the war in Bosnia from 1992 to 1995.

Washington seized the initiative by backing the illegal paramilitary Kosovo Liberation Army in that province in Serbia. The U.S. used the KLA terrorists to provoke NATO’s war against what remained of Yugoslavia in 1999, putting the Pentagon’s air power at the head of the pack of imperialist pirates.

Opposition grows to privatization of Balkans

After the destruction of Milosevic and his party, neoliberal forces in Serbia and the other republics privatized the health care system, sold off the mines, and closed automobile, petroleum and other industries. Now Bosnia has an unemployment rate of 43 percent, Croatia’s is 19 percent, and tiny Kosovo’s is 45 percent. Kosovo hosts the largest U.S. military base in the Balkans, Camp Bondsteel, which protects Kosovo’s criminal government and oversees NATO control in the Balkans.

Opposition to NATO is growing. This winter major protests against NATO‘s subservient governments emerged. When the government of Montenegro agreed to join NATO, thousands of people in its capital, Podgorica, poured into the streets in opposition last Dec. 13. The former Prime Minister of Yugoslavia, Momir Bulatović, told the rally that joining NATO, which had bombed Montenegro in 1999, would mean “blood of innocent people on our hands.” (RT, Dec. 13)

Bulatović pointed to the pattern that the war against Yugoslavia set: “What has Afghanistan done wrong, what has Iraq done wrong? Why has Libya been destroyed, what’s happening today in Syria?” After 25 years of oppression the people of ex-Yugoslavia are making the connections, resisting NATO and the juggernaut of militarism, occupation and neoliberalist impoverishment.

On Feb. 20 more than 15,000 people in the Serbian capital, Belgrade, protested in opposition to the Serbian government’s cooperation with NATO. On March 19, thousands marched against NATO in Novi Sad, Serbia’s second largest city.

In 1999 in all the imperialist countries and especially in the United States, the heavy media campaign to demonize Yugoslav President Milosevic weakened war opposition even within the progressive and anti-war movement.

In the U.S. in 1999-2001, the International Action Center and Workers World Party played a leading role among those who stood firm against expanding NATO’s mayhem and slaughter in Yugoslavia. Workers World organized forums and marches all over the country calling for an end to war on Yugoslavia. The IAC also published three books to explain the wars NATO conducted in Bosnia, Croatia and Serbia designed to crush the sovereign nation of Yugoslavia. (iacenter.org)