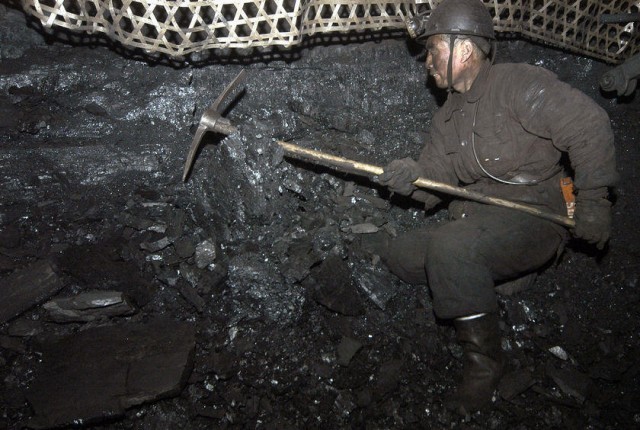 In this series, we’ve compared the response to global warming by the Chinese and U.S. governments.

With roughly one-fifth of the world’s people living in China and its rapid industrialization in recent decades, both particulate air pollution and greenhouse gas emissions have become big problems. However, China, so woefully underdeveloped before its socialist revolution, is now far ahead of the U.S. in developing and carrying out long-range, comprehensive economic plans to shift its economy to other energy sources.

Here we will look at what is happening to coal miners in both China and the U.S.

Of the widely used fossil fuels — coal, oil and natural gas — coal is the largest producer of carbon dioxide emissions. China has little oil and gas but a great deal of coal. Its air pollution problem has come largely from burning coal to make steel and generate electric power.

Arriving in Shanghai some 25 years ago, this writer was hit with a wave of nostalgia. It took a few minutes to figure out why. It was the smell of coal smoke, which had hung in the air all winter in the industrial city of Buffalo, N.Y., where I grew up.

China is still a developing country. But it has been building the infrastructure necessary to reduce consumption of fossil fuels while improving energy efficiency. This is not a wish list that could be shot down by future politicians, but part of a detailed plan for the country’s development. Even with economic growth, its carbon footprint will peak somewhere between 2025 and 2030, as early as nine years from now. Its per capita CO2 emissions have always been much smaller than those in the U.S., and will go even lower.

What will happen to coal miners?

Coal mining is difficult and dangerous work. Chinese coal miners used to have the largest casualty rate in the world, with thousands dying in mine accidents every year. However, fatalities have been greatly reduced in recent years with enhanced safety measures, and will decline further as older mines are closed. The pace of shutting mines has also been accelerated by the slowdown in the capitalist world economy and a global glut in many commodities.

Miners everywhere have been a militant, close-knit section of the working class. The coal miners’ union in the U.S. was once the most feared by the bosses. China’s miners are no exception.

A plan to cut emissions for the health of the people and the future of the planet has to deal with what happens to the workers in these areas of the economy. In China’s case, measures are being taken. The government is setting aside billions of dollars to relocate laid-off miners and their families.

The U.S. website mining.com, citing Chinese sources, reported on Jan. 21 that “Beijing plans to close about 4,300 coal mines, remove outdated production capacity of 700 million tons and redeploy around 1 million workers over the next three years. … China has eliminated about 560 million tons of coal production capacity and closed 7,250 coal mines in the last five years.”

This was updated in a China Daily report on Feb. 2 that Beijing “has promised to spend 100 billion yuan ($15.25 billion) a year for up to five years to address overcapacity in sectors such as steel and coal, while local governments will contribute another 100 billion yuan. … The coal industry alone will get around 140 billion yuan, and 1.8 million employees in the sector will be relocated.”

What’s important here, from our point of view, is that China is committing very large sums to relocate the affected workers.

Still a struggle of workers vs. bosses

No one should think this plan to relocate miners into other jobs will happen automatically. A constant tug of war goes on in China between the growing capitalist class and the state, which arose out of China’s great revolution made by the workers and peasants. Even in state-owned enterprises, officials can behave like bosses, as appears the case with the huge coal company Longmay, the product of a consolidation of many smaller state-owned mining companies.

Thousands of miners at Longmay’s Shuangyashan Mine in northern China have been staging militant protests because company officials owed them months of back wages. With layoffs looming, the miners were very apprehensive that the promises made them might not materialize.

Chinese workers have a very militant tradition, and will fight for their rights. When private owners are involved, as is the case with half of China’s coal production, the workers have all the more reason to struggle. The miners’ struggle is an important test of how much the government will let enemies of the workers in China, whether corporate owners or corrupt officials, get away with.

Meanwhile, what is happening to coal miners in the United States?

The first thing to note is that capitalist economic stagnation and mechanization have already eliminated many miners’ jobs here. The job losses don’t come from any strenuous environmental measures taken by Washington.

By 2013, the number of coal miners in the U.S. had dropped to about 80,000 from nearly 230,000 in 1980. With technological advances, each miner now produces almost three and a half times as much coal, while total production remains about the same.

Most mining in the U.S. has shifted from the Appalachians to Wyoming and Montana, where instead of digging underground, it is done through “mountaintop removal” and other surface extraction. In 2013, the coal extracted per worker in Wyoming, where virtually all production is surface mining, was 10 times that in West Virginia, where most mining is underground.

As more corporations globalized in search of higher profits, manufacturing in the U.S. declined along with the demand for coal. Companies like Peabody, which used to be big in Appalachia, have moved most of their operations overseas. Peabody Energy Australia, for example, sold 38.2 million tons of coal in 2014, while Peabody in the U.S. is said to be near bankruptcy.

The four largest U.S. miners by output — Peabody Energy, Arch Coal, Cloud Peak Energy and Alpha Natural Resources — which account for nearly half of U.S. production, were worth a combined $34 billion at their peak in 2011. Today they are worth only $150 million. Dozens of U.S. mining companies have declared bankruptcy in recent years.

The shift overseas can be seen in a February report by the Rhodium Group called “The Hidden Cause of America’s Coal Collapse.” It describes how union miners in Alabama were forced into voting for a rotten contract:

“At issue were the jobs, benefits and pensions of miners who had been working for Walter Energy Inc., which was undergoing bankruptcy. In December, the company persuaded a bankruptcy judge to let it renege on its promises to workers, jettisoning its pension and health care commitments to make itself more attractive to buyers.

“The UMWA protested, eventually striking a deal with the company that bought Walter (Coal Acquisition LLC), getting some of the jobs and benefits back, at substantially reduced levels. Last week the miners grudgingly voted to accept the deal.”

United Mine Workers International President Cecil Roberts explained what pushed the union to the wall: “The coal industry is in free fall right now. Multiple companies are in bankruptcy or soon could be. Prices are lower than they’ve been in decades. The market for the kind of coal mined in Alabama is weak due to an ongoing global recession.”

The U.S. news website vox.com is not left wing, but here’s what it published on Feb. 22 about these pressures on coal miners: “Coal companies have every incentive to publicize a ‘war on coal’ as the source of their woes. It diverts anger toward Barack Obama and perpetuates the illusion that a Republican president might revive coal’s fortunes. …

“Meanwhile, the executives who made big, risky bets … are getting bonuses, while workers who have given their lives to the mines are losing pensions and benefits. … Coal miners truly have no friends in the ruling class.”

Workers in the United States are being whipsawed by these conditions and right-wing politicians like Donald Trump are trying to capitalize on that.

While these job losses have nothing to do with environmental protection, we must be sure that our demands for cleaning up the planet include concrete measures to create jobs for all who need them. If China can put aside billions of dollars to do that, why can’t the billionaire-run U.S.?