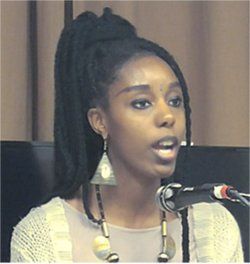 Black womyn writer Toni Cade Bambara, or “Mama Bambara,” demands us to be cultural workers. As cultural workers or folks who dedicate their lives to making a revolution possible, we must always strive to make the ancestors proud by continuing in their legacy.

When we lift the names of Harriet Tubman, Sojourner Truth and Ida B. Wells-Barnett, we are not only giving thanks for the fierce activism of our Black fore-mamas, we are centering womyn, specifically womyn, who live at the intersections of multiple oppressions, in the liberation struggle. And when we deem the lives of the most marginalized womyn important, we will move in a radical energy that uses all parts of ourselves to do our best to defend womyn and girls.

The title of my talk is “This Body Black, This Body Mine: Getting to the Bones of Reproductive Justice Theory and Work for Black Womyn and Girls.”

When I say Black womyn and girls, I am including womyn and girls of Africa and the African diaspora who are differently abled: transgender and gender nonconforming, of various sexual orientations, Spanish speaking, students, homeless, in prison, sex workers, battling drug addictions, single mothers and all the other womyn and girls whose lives are often times not deemed worthy of inclusion in political discourses or not seen as valuable enough to advocate on behalf of.

Some reproductive justice activists reduce the struggle to just “choice,” but we know there is no choice where access is absent. And in our imperialist, white supremacist, capitalist, heterosexual, able-bodied, cisgender, patriarchal society there has never been access or adequate access for Black womyn and girls.

An historical analysis of white supremacy reveals the seeds of repression of the reproductive freedom of Black womyn and girls. As the United States survived off the slave economy, controlling the use of their bodies was crucial. Black womyn and girls were forced to be breeding machines, to give birth to future generations of enslaved Africans who would generate money for the slavocracy. When not being forced to procreate, they were being raped by slave masters or punished by way of sexual brutalization, which sometimes resulted in the burning and scarring of their genitals. Other times they watched their children, partners and siblings be sold and taken or have no time to spend with the parts of their families still intact as they were ordered to nurse and care for the children of their plantation owners.

Black womyn and girl bodies then became the site of vaginal experimentation, most famously by Dr. J. [Marion] Sims who worked to cure tears from the vagina to the rectum by testing [surgical techniques] on enslaved Black womyn multiple times without anesthesia.

This violence continued throughout the years, with other bodily experimentations on Black people and in the 1970s morphed into forced sterilization. Black womyn and girls, specifically those who were recipients of government benefits, were sterilized against their will and threatened with the risk of losing their welfare, all while federal funds paid for the operations.

The [1973] case of two Black sisters, Mary Alice and Minnie Relf, aged 12 and 14, illuminated this discriminatory practice in the South when it was revealed that a doctor lied to their mother, who could not read or write, by having her sign what she thought was a contract for birth control shots, not sterilization for her daughters.

Some within the Black community have become anti-abortion, mostly due to conservative religious politics. Since the Black church has a history of political domination, the white Christian right has targeted them by funding “pro-life” campaigns [based] on a “Black genocide” myth. This problematic partnership ignores the genuine reproductive justice history and resistance on behalf of the Black community.

In an article titled “Whitewashing Reproductive Rights: How Black Women Get Erased,” Renee Bracey Sherman writes eloquently about the resistant spirit of Black womyn and Black people to reproductive repression. She notes:

“Abortion for black women has always been a revolutionary rejection of patriarchy, white supremacy and forced systems of oppression … throughout slavery and into the 20th century, self-abortion through herbal remedies, hangers, hat pins and pencils were a way out of slavery and poverty. Our ancestors fought hard to refuse to carry the children of their master rapists and rear another generation of slaves, even when it meant that ‘barren’ women were deemed worthless chattel and sold between plantations. From generation to generation, stories and recipes were passed down to ensure that women weren’t forced to carry pregnancies they never desired or weren’t able to carry healthily. For as many powerful women that raised children in the worst conditions imaginable, so there were those who refused.”

Later on she writes: “As our elders joined the ranks of laborers during World War I, they found a great need for access to birth control and abortion. In Detroit, Dr. Edgar Bass Keemer Jr. provided abortions from 1938 through the 1950s, ensuring that black women had access to safe abortion care regardless of their income.”

What this phrase includes

Today our white supremacist society continues making use of sexism and racism. Yet the media are seductive in convincing people that things are progressing, especially with so many television shows that have Black womyn main characters. But this recent hypervisibility of Black womyn on TV has done no work to shift understandings and uses of Black womyn and girl bodies. Our bodies still serve as sites of commodification, capital gain and are super susceptible to the white gaze.

The phrase “imperialist, white supremacist, capitalist, heterosexual, able-bodied, cisgender, patriarchy” is a useful one because it allows us to name systems of domination and to get specific about where they intersect to oppress people. A genuine reproductive justice theory is always intersectional in its analysis of reproductive oppression and looks at the ways race, gender and gender identity, sexual orientation, different physical and mental capabilities, and class overlap to redefine a womyn’s and girl’s relationship to her body.

Using an intersectional lens, we can see that reproductive justice for Black womyn and girls is impacted by:

How to join resistant efforts?

We have to actively listen to the stories of Black womyn and girls. There is an organization that mobilizes around gaining access to abortion and family planning called Trust Black Women. That is what we must do — trust Black womyn and girls.  A socialist revolution will guarantee us the freedom to have control over our bodies and will begin to pave the way for liberation for all people.

To view this talk in its entirety, go to youtube.com/watch?v=fRD8EGt9Wtw.