Hillary Clinton’s anti-LGBTQ statement on March 11 showed how the ruling class fabricates “history” out of thin air and lies to suit its own purposes. During Nancy Reagan’s funeral, Clinton praised former Republican President Ronald Reagan’s spouse for “starting a national conversation” about HIV/AIDS.

Furious pushback from the lesbian, gay, bisexual, transgender and queer community on social media, and even from the conservative Human Rights Campaign, rapidly exposed Clinton’s lie and forced her to immediately give a terse apology. More importantly, the outrage underlined the fact that widespread organizing in the streets — and not ruling-class politicians — was the force that opened up action on AIDS. 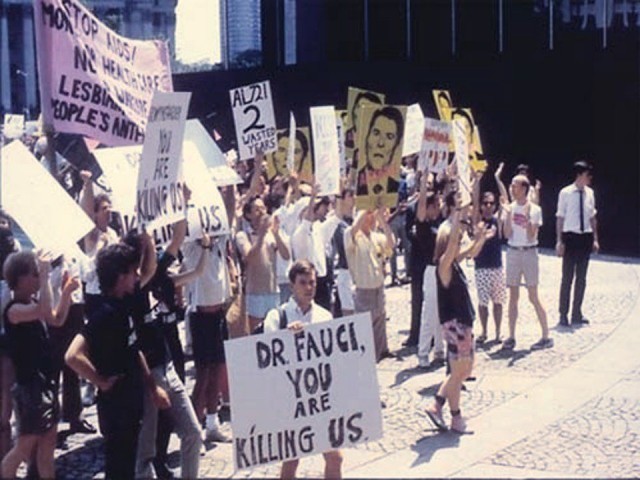 ACT-UP 1980s protest at the U.S. National Institutes of Health in Bethesda, Md.

In fact, by 1987, more than 20,000 people had died of AIDS, but President Reagan had not even uttered the name of the disease. Nancy Reagan refused to help her friend, movie star Rock Hudson, who appealed for assistance as he was dying of AIDS-related complications in 1985. (The Daily Beast, March 11)

At a press briefing on Oct. 15, 1982, Reagan’s Press Secretary Larry Speakes was asked repeatedly if the president intended to address the epidemic health crisis. Speakes replied with derisive, homophobic laughter at hearing of the deaths from AIDS. The vicious laughter echoes in a video posted at Slate.com on Dec. 1. (tinyurl.com/zhuogdf)

The “conversation” about AIDS was begun by dedicated, militant organizations like ACT-UP (AIDS Coalition to Unleash Power). Their iconic pink triangle poster, which read “Silence = Death,” originally bore these words: “Why is Reagan silent about AIDS? What is really going on at the Centers for Disease Control, the Food and Drug Administration, and the Vatican? Gays and lesbians are not expendable. Use your power. Vote. Boycott. Defend yourselves. Turn anger, fear, grief into action.” (actupny.org)