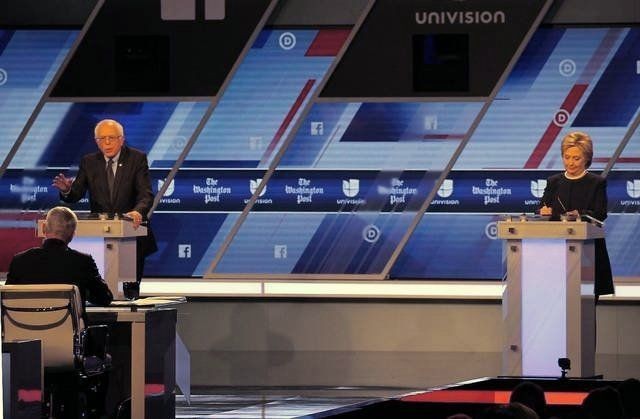 A recurring theme in the 2016 presidential elections is immigration, especially on the Republican side.

The inflammatory rhetoric from Republican contender Donald Trump is especially insidious with his calls for building a wall on the southern U.S. border, inciting some of the most hateful racism ever.

But the Democrats also raise immigration, and it was especially a top issue in the presidential debate held on March 9.

The running theme on immigration, Trump’s racist “Build the Wall” bombasts, coupled with the economic crisis that has ushered in untold hardship begs the question for Latinos/as: what road to take in this election season?  Should Trump just be dismissed and brushed off like an exasperating mosquito?  What will Latinos/as gain by supporting the Democrats?  What can stop the deportations? What vote will bring good paying jobs, affordable health care and education for all? Who can stop the gentrification of our communities?

The answers lie not in the voting booth but in the streets. They lie in building a movement, not just any movement, but one guided by revolutionary class consciousness, a movement that knows that to make real gains for Latinos/as, the first task is to defend Black Lives Matter.

Democrats and the ‘Hispanic’ base

The March 9 Democratic Party debate was held in Miami, whose population is 70 percent Latino/a. It was particularly geared to the primarily Latino/a audience and social climate of southern Florida. It was sponsored by Univision and the Washington Post and held at Miami-Dade College.

Univision is the fifth largest television network in the U.S., averaging about 1.5 million adults watching during primetime and, according to its publicity, it outperforms “one or more of the English-language broadcast networks [ABC, CBS, NBC or FOX] on two out of every three nights.”

The debate was indeed unique. It was bilingual and aired in Spanish simultaneously on Univision. The questioners and moderators often spoke Spanish before being translated.

It held a Latino/a flavor throughout the night, which started with a young Mexican-American singing the U.S. national anthem in his charro mariachi outfit.

Of course, the national anthem offends many who know that the anthem is in reality a pledge to the imperialist system.

The boy was Sebastien de la Cruz, who in 2013 had already made national news. During the National Basketball Association finals that year, Sebastien sang the national anthem at a San Antonio Spurs game in San Antonio, Texas, also in his mariachi outfit. He immediately received backlash from racists who were offended that he had sung that song in his charro gear.

To the Spurs’ credit, they wonderfully brought back Sebastien a few days later at another game as a show of support for the young boy who had been told to “go back home” and other racist garbage. Sebastien had heartfully countered, “I am home.”

A constant characteristic of Democratic Party elections is their courting of the Latino/a vote. This year is no exception.  The same is true of their courting for African-American votes.

So it was no surprise that Sebastien was invited to open the debate, charro suit and all.

Other Latino/a flavors of the night irked a lot of Latinos/as, however. When Hillary Clinton stated, “I said, ‘Basta,’” on a past development, social media went nuts.

But many Latino/a activists were angered by a politician’s use of Spanglish, especially one who is such a warmonger and one who not long ago characterized African-American men as “super predators.”

Clinton’s role in Honduras is especially offensive as she was part of the Washington administration that supported the ouster of democratically elected President Manuel Zelaya. His ouster then led to extreme social turmoil, at least 25,000 deaths and a mass exodus to escape the violence.

At another moment in the debate, moderator María Elena Salinas asked Clinton if she was flip-flopping on the immigration issue or “what some would call ‘Hispandering.’”

Hillary Clinton has been accused of Hispandering many times. The word is Spanglish for the fake interest and pandering of Latino/a issues and culture for self-serving interests.

On Dec. 10, National Public Radio reported that Clinton was accused of this another time, when she called herself “La Hillary” [the Hillary] and “Tu Hillary” [Your Hillary].  On another occasion last year, Clinton ran a tweet with a picture of her, Bill and their grandchild with the quote, “Seven ways Hillary is just like your abuela.” “Abuela” means grandmother.

Another thing that made the debate in Miami different was the participation of an immigrant woman from Guatemala who raised a question from the floor.

Although, unlike other outlets, Univision often represents the interests of Latinos/as, it is still a capitalist institution.  It too falls prey to bourgeois ways so that it rarely puts dark-skinned Latinos/as on the screen.  And it has also put dark-skinned or Indigenous people from the Americas in a servant or negative role.

So when Lucía Quiej asked her question, it was a joy to see. She was short and dark. And beautiful.

She looked like the people that the U.S. has slaughtered in Guatemala, like someone from the Indigenous Lencas nation, whose leader, Berta Cáceres, was just recently killed by the death squads in Honduras that “La Hillary” helped create.

Quiej asked the candidates what they would do about cases like hers, where her husband had been picked up and deported for an invalid driver’s license.  Her children could be seen sitting next to her with tears in their eyes.

Both candidates spoke for family reunification.

During the evening, the moderators pressed on and forced the candidates to answer the question, “Would you deport children?” as president.  Both said no, Sanders more forcefully.

Clinton repeated the view that only criminals or terrorists should be deported, but ironically no one pointed out that under those guidelines Quiej’s husband would still be deported as he had “broken” the so-called law of driving without a license.

And no one pointed out the insulting remark that Clinton had made in an earlier debate this year when she said that the U.S. cannot allow more Central American children into the country because “we have to send a message to parents that it is dangerous to send children.” This is imperialist arrogance at its finest.

Sanders on Nicaragua and Cuba

The night of the debate continued with another theme necessary to raise here. It was a question raised to Bernie Sanders about a 1985 interview where he praised Daniel Ortega’s Sandinista government and made a favorable comment about Fidel Castro as well.

Sanders’ answer for the most part was progressive and important for national TV.

The truth is that Cuba is, in fact, more democratic than the U.S. In Cuba, one does not need billions of dollars to run for office.  Policies in Cuba are thoroughly hashed out among the whole population; there are many elections, all free and fair; its mass organizations are directly linked to the government; and so on.

But Sanders also said that Cuba has educated its children, has provided free health care, sends doctors around the world and has “totally transformed society.”

Most important, Sanders told millions of people, “Throughout the history of our relationship with Latin America we’ve operated under the so-called Monroe Doctrine, and that said the United States had the right do anything that they wanted to do in Latin America. So I actually went to Nicaragua and I very shortly opposed the Reagan administration’s efforts to overthrow that government. And I strongly opposed earlier Henry Kissinger and the [inaudible] to overthrow the government of Salvador Allende in Chile. … [We] should be working with governments around the world, not get involved in regime change. The key issue here was whether the United States should go around overthrowing small Latin American countries. I think that that was a mistake.”

Clinton, however, was venomous in her lies against socialist Cuba, stating the Cuban government “oppresses,” “disappears,” “imprisons” and “even kills people” for expressing their views. The National Network on Cuba has demanded Clinton’s correction and retraction of these slanders.

When you consider where the debate took place — in the Dade County hotbed of anti-Cuban revolution sentiment — Sanders’ pro-Cuba remarks, even though tainted with imperialist propaganda, were important to be heard. At the end of the debate, in fact it was Sanders, not Clinton, who got a standing ovation. No small thing.

To point out the heinous role of Henry Kissinger, a good friend of Hillary Clinton, and to distinguish himself from her on the issue of Kissinger was also good.

Is this and his other progressive remarks enough reason to support Sanders? That is material for another commentary.

But Clinton’s Hispandering, the fact that a Democratic administration has carried out more deportations than any other U.S. president, the U.S. government’s role in Honduras, its support and funding for the bloodbath raging in Mexico, its lack of intervention on behalf of the missing Ayotzinapa 43, and the deteriorating conditions for Latino/a workers in this country are more than enough reasons for Latinos/as to break, en masse, with the Democratic Party.

But food for thought is also Sanders’ inability to break from the capitalist system, his failure to genuinely recognize the profound impact of racism on society and to go beyond income inequality to support the need for reparations for Black people. These are just more examples of the need to break from all of the Democrats.

What would happen if just once when Sanders was asked, “How can you possibly pay for free college tuition?” he said, “Shut down the Pentagon! Take the money from there!”

The capitalist system needs deportations. It needs racism and war to survive.  The two parties have survived for generations because, after all is said and done, they defend capitalist interests.

More and more Latinos/as, especially the youth, recognize that politicians who change depending on which way the wind is blowing are not people who can defend you. Latino/a youth have gone through a period that has led them to conclude, as one youth declared in Chicago, “Liberation, not deportation!”

That is why Workers World Party’s Moorehead/Lilly 2016 presidential campaign says that this system must be overturned in order for humanity to survive. We are taking our message to the Democratic and Republican conventions this summer. No racist wall! No Hispandering! No capitalism!

Gutierrez is the campaign manager for WWP’s Moorehead/Lilly 2016 presidential campaign.