In Boston on March 8 and in New York City on March 11, the first two of four national rallies demanded that the U.S. government “Free Aafia Siddiqui” and allow her to return to her family in Pakistan. Framed in a U.S. court in 2010, she has been serving an 86-year sentence at Carswell Federal Prison ever since.

Human rights fighter Ramsey Clark, a former U.S. attorney general, has described Siddiqui’s case as “the worst case of individual injustice I have ever seen.” 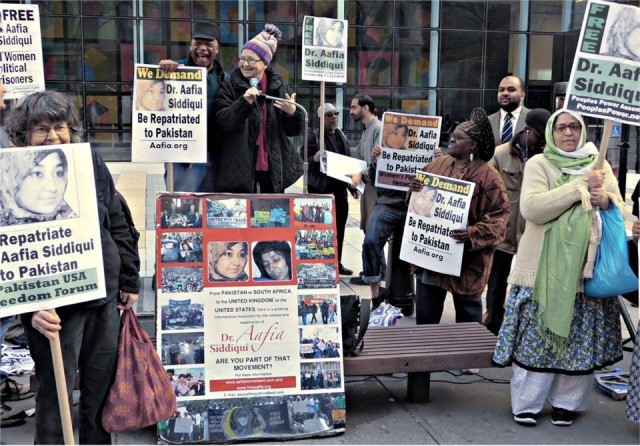 At the New York rally, Mauri’ Saalakhan outlined Siddiqui’s story and told why he is dedicating his life to freeing her. He said that Siddiqui was at the top of her class at the Massachusetts Institute of Technology, earned a scholarship to Brandeis University and became a successful practicing cognitive neuroscientist until she was framed and accused of being a Muslim terrorist. In 2003, she was abducted by Pakistani secret police while riding in a cab with her three children. They grabbed her two oldest and ripped the infant from her arms.

The two older children were returned to her family five and six years later. They returned speaking perfect English. The youngest is believed to have died, as the oldest, Ahmed, remembers seeing his baby brother bloody on the ground.

While held in Pakistan, Siddiqui was tried for attempting to shoot U.S. interrogators in Afghanistan in 2008, although she was the only one shot in the incident.

At the rally in front of the federal building, Lynne Stewart, the heroic activist lawyer who was also a political prisoner at Carswell, spoke about the horrendous conditions she and Siddiqui had to endure there. But, said Stewart, Siddiqui is facing far worse conditions because despite her serious gunshot injuries, she is still being kept in solitary confinement, is serving a life sentence and has not been able to see any visitors. Stewart said that, worst of all, Siddiqui has not been able to see or hear from her children.

“Millions of Pakistanis and all that nation’s political parties from left to right, religious to secular, have demanded her return to Pakistan,” Shahid Comrade, of the Pakistan USA Freedom Forum, told the protesters. “Aafia has become a symbol of thousands of disappeared prisoners.”

Sara Flounders was in Pakistan with Cynthia McKinney in December 2012 when she was invited by Siddiqui’s defense committee to speak for her repatriation. She told the New York demonstration: “Hundreds of thousands of Pakistanis rallied again and again at demonstrations calling on the U.S. to repatriate Siddiqui. The huge, huge demonstrations show how Siddiqui’s case is deeply felt by the people there. But,” she continued, “our rallies are covered more in Pakistan than in the U.S. because of backwardness and racism in the U.S. Siddiqui’s name here is relatively unknown even though this is where her sensational sham of a trial took place.”

The third rally is set for March 19 in Washington, D.C., and the fourth on March 30 in Fort Worth, Texas.