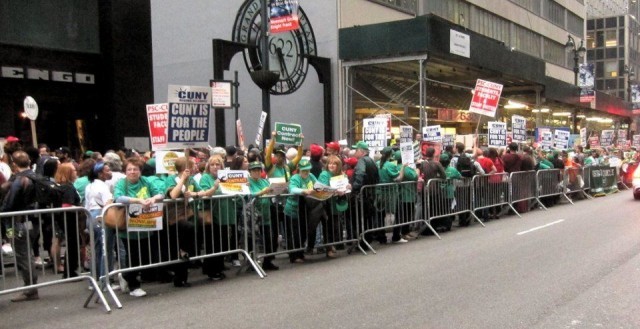 For the past five years members of the Professional Staff Congress have worked without a contract and for the last six years without a raise. The PSC represents the faculty and professional staff at the City University of New York.

For the past seven years, members of the American Federation of State, County and Municipal Employees District Council 37, which represents most of the CUNY workers not in the PSC, have worked without a raise.

Many members in both unions say this pay lag has gone on too long.

CUNY is the third-largest university system in the United States, with more than 285,000 full-time students. Seventy-five percent of its students are people of color; 40 percent were born outside the U.S.; 30 percent come from families with incomes below $30,000 a year. (CUNY Office of Institutional Research) These workers, like their family members before them, belong to New York City’s vast, multinational working class.

What impelled the creation of the CUNY Rising Alliance was Gov. Andrew Cuomo’s announcement on Jan. 13 that he was removing $485 million from the state’s contribution to CUNY and assigning it to the city. The CUNY administration called this a “crushing” cut that would increase tuition by 50 percent. Since the 1970s the state has been the principal source of support for CUNY’s senior colleges. However, during the past decade or longer there has been a serious erosion in state financial support.

The CUNY Rising Alliance (#CUNYrising) began its fightback campaign March 10 with a late afternoon rally outside Gov. Cuomo’s Manhattan office, followed by a march through midtown and a rally at a church.

Barbara Bowen, president of the PSC, said at the rally: “In a cruelly unequal economy and a society still shaped by structural racism, CUNY offers the one shot at a stable life, a good life, for hundreds of thousands of New Yorkers. We call on Albany not to take that opportunity away.

DC 37 Executive Director Henry Garrido told the protesters: “For tens of thousands of New Yorkers, the quality of education and affordability offered by the City University of New York is a path to upward mobility. That path is now being blocked by a proposed budget that would raise CUNY tuition by $300 a year and shift $485 million of the state’s share of CUNY funding to the city, while excluding monies for ongoing university operations. It also denies CUNY employees the $15-an-hour minimum wage hike the governor has proposed for all other public employees.”

On March 13, the University Student Senate held a press conference in front of City Hall and then marched across the Brooklyn Bridge to Cadmon Plaza. Many different CUNY campuses were represented, and almost all of the politicians who spoke were graduates of CUNY, many having attended when CUNY’s tuition was free.

To find out more about the CUNY Rising Alliance, read its Platform for Change posted on psc-cuny.org.