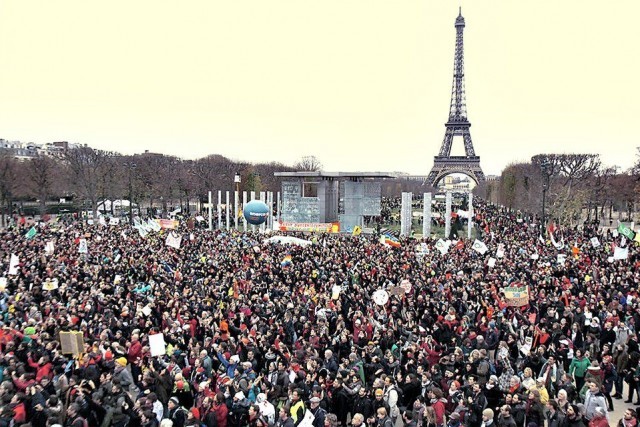 A half-million workers and students took to the streets in more than 200 separate protests throughout France on March 9 to demand that the government withdraw its proposal to modify the labor code. Many of the workers struck for the whole day, exercising their constitutional right to strike.

Over 1 million people have signed an online petition requesting the government withdraw its bill.

Many protections French workers won after hard struggles in the last century would be weakened if this bill is adopted. Benefits provided in other countries by union contracts are enshrined in the national French labor code that applies to all workers.

That means almost all workers qualify for five weeks of vacation, plus 10 holidays and something called RTT, similar to comp time, which reimburses them with paid time off if they work more than 35 hours a week. Their statutory benefits include health coverage, unemployment allowances, retirement/pension funds and time off for life changes like the birth of a child or a death in the family.

There is a special labor court in charge of administering and enforcing these rights and also rules on layoffs and firings. That court makes legally enforceable decisions generally much quicker than arbitrations in the U.S.

While the militant trade unions like Force Ouvrière (FO) and the General Confederation of Workers (CGT) had a major presence in the protests, along with left parties like the New Anti-capitalist Party and the French Communist Party, what was remarkable was the high proportion of youth who came out. Some oppositional members of the governing party also participated.

While the party running the French government calls itself “Socialist,” it firmly defends the interests of the French bourgeoisie. Under this party, French imperialism actively intervenes alongside U.S. imperialism in the Middle East and Africa.

The reformist unions, like the Confederation of Democratic French Labor (CFDT), only called for the government’s proposal to be “modified.” This slogan only brought out a few hundred protesters in Paris on March 12 and scattered handfuls in some of the largest French cities. (FranceTV.info, March 13)

The unions representing workers for both the long-distance railroad lines and the regional lines also struck on March 9 to protest proposed changes in their working conditions. While the government and the companies tried to downplay the number of railroad employees who struck, Belgian television reported that there were 190 miles of traffic jams in the Paris metropolitan area on the morning of March 9. (BFMTV.com)

Though the participation of university students, along with  student unions, is fairly common in broad social movements in France, the extent of the participation of high school students was unusual. French TV showed a number of high schools whose entrances were blocked by piles of trash cans and construction barriers. The students who should have been in the building held a “general assembly” outside on the street to decide how they were going to participate in the protest.

French television on March 13 reported that French President François Hollande and Prime Minister Manuel Valls intend to meet with the leaders of the union confederations and the student unions to see if they can reach an agreement on the government’s proposed changes.

The FO and the CGT, along with their allies in the militant student unions, have made it clear that they want the government proposal withdrawn, not reworked. They have said they will organize a truly massive protest on March 31 if the bill is still on the table.