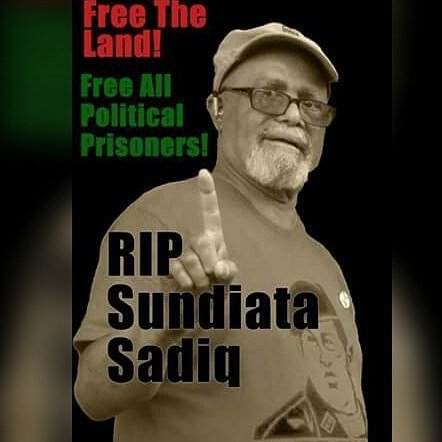 His name was Sundiata, and for over 40 years, he fought for the freedom of his people.

Headquartered in Ossining, N.Y., Sundiata worked in, or led, a number of groups working for Black Liberation and Social Justice.

To list them all would exhaust our time, but just to mention a few: He chaired CORE [Congress of Racial Equality] in Rockland County [N.Y.] back in 1968 and 1969; in the 1970s, he chaired the Ossining Black Liberation Front; and later he led the NAACP’s Ossining chapter in suits against police brutality and helped spark the nation’s first environmental racism suit against a notorious Ossining waste transfer station.

He shined not just as a leader, but as an organizer, working for freedom for political prisoners.

His quiet, reassuring manner attracted younger activists, who came to admire and respect Sadiq, for how he invited them into the Movement — and taught them about struggles before their time(s).

Sundiata Sadiq was, despite being a warrior for freedom, a truly gentle man. He talked to people with respect and dignity; he welcomed them; he cared about them — and they could feel it.

MOVE’s Pam Africa always spoke highly of him, and when she said, “That’s a good brotha,” you could feel it, for he was.

When I met him a few years ago, it seemed like we’d known each other for years. He was kind, gentle, determined — and he loved his people.

He was a Freedom Fighter, who will be sorely missed by his partner, Debra James; by his family; by his comrades; and by his people.