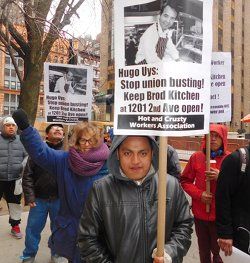 New York — The owners of Bröd Kitchen on Manhattan’s trendy Upper East Side suddenly announced on Jan. 14 that they would permanently shut down the unionized bakery/restaurant the following day. This threat to throw 19 workers out of their jobs was a clear attempt at union-busting. The company made the announcement just as it was supposed to begin negotiations for the union’s second contract. The union represents primarily immigrant and African-American workers, some of whom had left other jobs to work at Bröd.

Bröd is the new name of the Hot and Crusty bakery. In 2012 workers there waged a historic unionization campaign, led by the Laundry Workers Center and shown in the award-winning documentary “The Hand That Feeds.” They fought hard for a better life for themselves and all workers, forming their own union, the Hot and Crusty Workers Association, which won paid vacations, de facto seniority, a union hiring hall and other crucial rights.

By trying to wipe that out, Bröd’s owners are pushing forward a climate in which every right won by working people is under attack.

Against this attempted union-busting, a strong coalition of trade union and student militants as well as immigrant activists rallied outside Bröd’s new West 4th Street store on Jan. 28. Between 200 and 300 people were at the protest.

Their main slogan was “Stop union-busting at Bröd Kitchen.”

The rally was endorsed by New York City’s Central Labor Council. Student groups from both New York University, which is close to the new Bröd, and Hunter, close to the old Bröd, were strongly present.