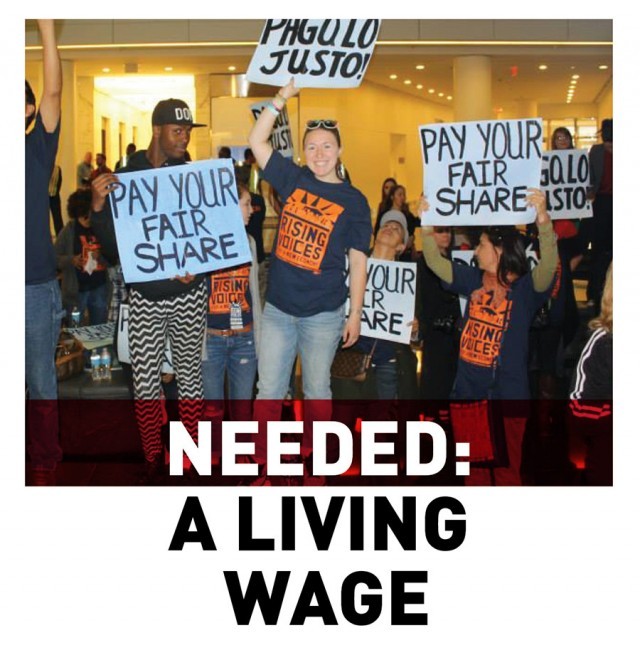 Des Moines, Iowa — Iowa joined the Fight for $15 when the first fast food strike in state history erupted on Jan. 28, the day of the Republican presidential debate in Des Moines.

Employees from across Iowa, a so-called “right-to-work” state, walked off their jobs that day to demand living wages and the right to a union. McDonald’s workers struck at a store on the northeast side of the city at 6 a.m. and at another on East University Avenue at noon, followed by a march and protest downtown. They were the first such actions in Iowa.

From across the Midwest, hundreds of workers in fast food, child care, home care and other trades started assembling at Cowles Commons in downtown Des Moines at 5 p.m. Some carried signs and banners proclaiming “STRIKE: Raise pay, live better,” “Fight for all workers” and “Come get our votes: #FightFor15.” They chanted, “The people united will never be defeated!” and told all candidates, regardless of political party, they will not receive workers’ support if they don’t support the fight for $15.

The demonstration was organized by the Service Employees International Union and Iowa: Fight for $15, a project of Iowa Citizens for Community Improvement. United Auto Workers unionists were also there.

Drivers in passing cars honked their horns to express solidarity with the marchers, who braced themselves against the wind as they reached the Veterans Memorial Auditorium at the Events Center at dusk. They chanted, “We work! We sweat! Put $15 on our checks!”

Speeches in front of the auditorium were in both Spanish and English. Terrance Wise of Kansas City spoke about how workers in the restaurant sector work long hours and still cannot afford basic needs, and noted, “We’re making history.”