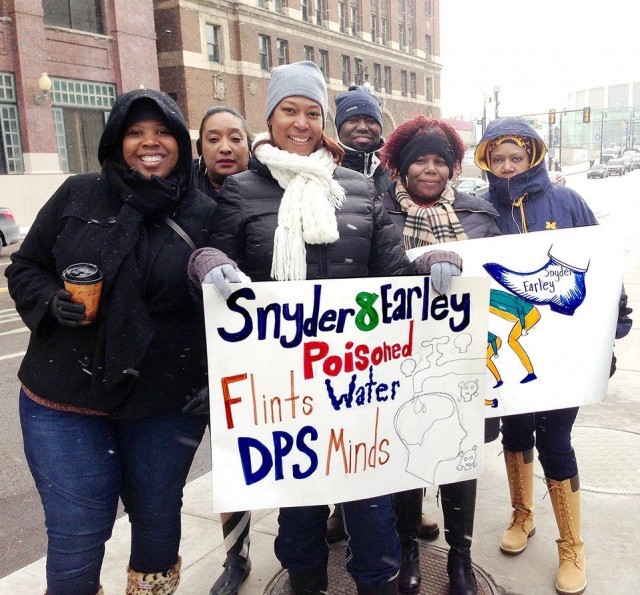 As its two-year anniversary approaches, the Flint Water Scandal keeps growing. In April 2014 Flint dropped the Detroit Water and Sewerage Department as its primary water supplier and started drawing water from the Flint River, a decision made months earlier. The excuse for the switch — that this was cheaper than renewing Flint’s contract with DWSD — has come under fire. DWSD recently released communications from 2013 telling Flint it would actually be cheaper to stay with DWSD!

Last October, Flint finally hooked back up with DWSD, but this has brought no relief to children or parents. Every picture speaks volumes. A mother is shown bathing an infant in scarce bottled water to keep him from getting a painful skin rash. A parent’s skin is covered with lesions because there isn’t enough bottled water to go around. Yet residents are only being told the water is unsafe for drinking, not for bathing.

The world has seen the now-famous photos of the brown tap water that residents were told was safe to drink. In some homes the water is still yellow after passing through a filter. People are snatching up cases of bottled water faster than they are delivered. Those without cars are pushing shopping carts or carrying cases on their shoulders in the cold and snow.

Already the effects of lead can be seen in children who are suddenly failing in school subjects that were a breeze for them before, or whose bones ache, or whose immune systems are compromised. It will be years before the full impact on this city of 100,000 is known, especially on children under six and those whose mothers ingested lead while pregnant.

Lead levels in the water have tested as high as 4,000 parts per billion. The federal government considers 15 ppb cause for concern. Free filters are ineffective at levels above 150 ppb.

The Flint River ran clean for thousands of years. Industrial pollution, primarily by General Motors, changed that. Nevertheless — according to Virginia Tech University professor Marc Edwards, the water safety expert whose research team confirmed the lead presence in Flint water — if anti-corrosive chemicals had been added to the water, lead would not have leached from aging pipes into the water system.

The cost of adding such phosphates to the river — a routine water treatment practice — would have been at most $150 a day. Not adding phosphates, which coat the pipes and prevent them from leaching toxic metals, has also been blamed for copper poisoning and a Legionella outbreak that has killed at least nine Flint residents.

Now the cost-saving measure, driven by capitalist austerity, has turned into a multibillion-dollar blunder. The millions being spent on bottled water, filters and now recycling are the tip of the iceberg. The water infrastructure, corroded beyond repair, could cost $1.5 billion to replace. The cost of providing proper nutrition, health care and extra help in school to 27,000 children under 18 is astronomical.

Money exists to fix this catastrophe

In the face of this catastrophe, the state has come up with the paltry sum of $28 million in aid. Gov. Rick Snyder says there needs to be further study before a decision can be made to replace the pipes. Washington is sending only $80 million to Michigan — an unforgivable loan with only $17 million going to Flint.

The state is sitting on a half-billion-dollar budget surplus and could use its “rainy day fund” to help Flint. Upon taking office, Snyder created tax breaks for corporations worth $1.7 billion annually. In just one year this giveaway would be enough to rebuild Flint’s water grid!

A modest cut in the bloated Pentagon budget could rebuild aging water infrastructures, not only in Flint but for communities across the country that could experience a similar disaster. Already Sebring, Ohio, and St. Joseph, La., are seeing the same water issues as Flint.

The dearth of state assistance has meant that every person in Flint, a Black-majority city with a 40 percent poverty rate, must carefully conserve their ration of clean water. This is in Michigan, a state surrounded by four of the five Great Lakes, which hold 20 percent of the world’s freshwater.

To make matters worse, residents have been told that they must pay for their poison — or have their service disconnected. Once that happens, Child Protective Services can remove children from the home.

Not everyone can even get clean water. Thousands of Latinos/as live in Flint. Literature about the crisis has only been available in English. At the fire stations where bottled water is distributed, signs are posted demanding residents produce state IDs. So-called undocumented workers do not have state IDs and could face deportation if they try to get water. Seniors and people with disabilities also face particular difficulties accessing water.

Flint’s tragedy is compelling. More celebrities, especially from the hip-hop community, have become donors. Mosques, churches and synagogues all over the country have sent water, and Black college sororities and fraternities have raised funds for Flint.

Union members are arriving with truckloads of water and filtration supplies and delivering them door to door. Plumbers, who have been installing filters for residents at no charge, are now replacing faucets that the filters don’t fit. Unions owe a debt to Flint. The 1937 Flint sit-down strike, a 44-day occupation that forced General Motors to recognize the United Auto Workers, was one of the most important milestones in U.S. labor history.

African Americans are still due reparations for the centuries of unpaid labor performed by their ancestors and for the many years of racist Jim Crow segregation, discrimination, lynchings and state violence that followed. Flint’s crisis would not have reached such epic proportions if it had occurred in a wealthy white suburb. Now Flint deserves reparations for the state’s racist and callous disregard for human life.

The water infrastructure must be rebuilt top to bottom, and every healthcare need created by this scandal must be provided for. There must be a moratorium on water shutoffs, and the water department must refund payments made for poisoned water. Repairs to homes, appliances and any belongings damaged by the tainted water must be made at no cost to residents. Reparations must be paid for pain and suffering.

GM and the bankers owe Flint. GM’s Jim Crow hiring practices kept most jobs off-limits to Black workers until the UAW demanded equal opportunity on the assembly line. The company abandoned Flint in the 1980s, closing plants and cutting 80,000 jobs while keeping high-tech plants open in the white suburbs. GM left behind a toxic mess and used bankruptcy to avoid the cost of cleaning it up.

After GM left, the banks took advantage of Michigan’s emergency manager law to make sure debt service was paid first. The banks forced austerity on Black-majority cities like Detroit and Flint, just as they do in Asia, Africa and Latin America. Capitalist austerity drove the decisions that poisoned Flint.

The banks and GM got bailed out. Let them pay for the crisis they created.