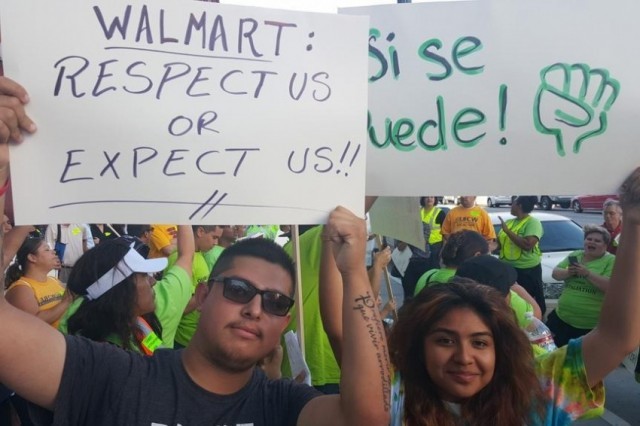 Years of workers’ struggle against Walmart’s bosses led Jan. 21 to a National Labor Relations Board ruling that Walmart must offer to reinstate 16 fired workers who joined the “Ride for Respect” set of strikes in 2013. Those strikes culminated in a large protest at the company headquarters in Arkansas organized by the union-supported group, “OUR Walmart.”

The judge also ruled that Walmart must pay the workers all their back wages, and that the company must hold meetings in 24 of its stores “to inform workers of their rights to organize under U.S. labor law.” (reuters.com, Jan. 22)

Of course, corporate executives for Walmart, owned by the Walton family with a net worth of $144.7 billion, plan to appeal this ruling. All workers should be aware that the NLRB has far too often reversed its own rulings that aid workers. It was the struggle of the brave Walmart workers and indeed all the low-pay workers fighting for $15 an hour that set up this victory and will be essential to sustain it.

Jess Levin, spokesperson for the pro-union group, “Making Change at Walmart” (MCAW), declared: “Not only is this a huge victory for those workers and Walmart workers everywhere who continue to stand up for better working conditions, but it sends a message to Walmart that its workers cannot be silenced.” (makingchangeatwalmart.com, Jan. 21)

Lawyers from the United Food and Commercial Workers Union, which has been supporting Walmart workers in their campaign for better pay, better working conditions and a union, are representing these workers.

Walmart is infamous for its low pay and bad working conditions. Many of its workers must supplement their pay with food stamps. One Walmart store went so far as to organize a canned food drive, asking Walmart customers to donate food to its store workers, rather than pay them enough for them to be able to buy food themselves.