Jan. 8 — The seemingly irresistible momentum of Haiti’s mass movement — combined with convincing evidence of widespread election fraud — have forced a surprise delay in the slow-motion theft of the 2015 national elections. 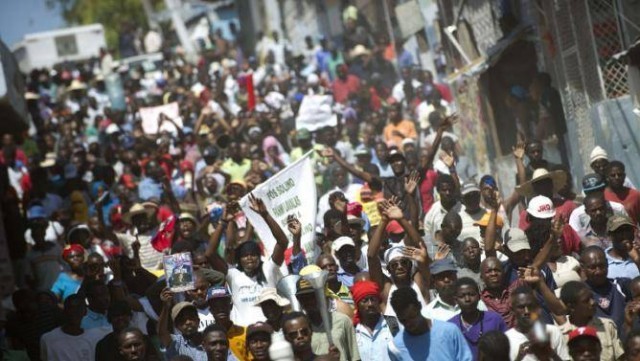 Demonstrators march against the government of Haitian President Michel Martelly.

Faced with December’s incredible outpouring of nonstop demonstrations throughout Haiti — and daily revelations of vote rigging and voter suppression in the Aug. 9 and Oct. 25 elections — the authorities were constrained to postpone the runoff that had been set for Dec. 27. But there’s no end to the maneuvering by Haiti’s ruling elite, outgoing President Martelly and their foreign backers, determined as they are to thwart the popular will in this election.

Ambassador Peter Mulrean said he sees “no evidence of massive electoral fraud.”  But his “see no evil” pose is contradicted by Martelly’s own new election commission. This body disclosed on Jan. 4 that they studied 1,771 vote tally sheets and found 92 percent had “serious irregularities” amounting to “massive fraud.” Then, on Jan. 6, thousands marched to denounce Mulrean and Martelly: “Don’t steal our votes!” Ominously, while the people marched, a plane carrying top State Department operatives Thomas Shannon and Kenneth Merten touched down in Haiti.

The 2015 elections were plagued by endless incidents of ballot stuffing, vote buying, armed coercion and naked vote rigging, all the way from polling place to final tabulation. Fanmi Lavalas, long the most popular political party in Haiti, described the Oct. 25 election as “a preplanned fraudulent enterprise that stripped the elections of all credibility” in its petition to the Inter-American Commission on Human Rights. “These rigged elections of 2015 constitute … an attack on the national sovereignty … and a violation of the political rights of the Haitian people.” (tinyurl.com/jjmdqx2)

Here are some key facts about the 2015 stolen election:

International Days in Solidarity with the Haitian People

Inspired by the Haitians’ strong response to the election debacle, the Haiti Action Committee (HAC) issued a call for solidarity actions on Dec. 16 — the 25th anniversary of Haiti’s first free election in 1990. That was when Jean-Bertrand Aristide swept into the presidency with two-thirds of the vote on a platform of social and economic justice for the poor majority. After barely seven months in office, Aristide was overthrown in a U.S.-backed military coup in 1991.

In 2015, after being excluded for 11 years since a second U.S.-sponsored coup in 2004, Aristide’s Lavalas party was finally able to run candidates again, headed by presidential standard-bearer Dr. Maryse Narcisse. People in poor neighborhoods all over Haiti welcomed the grassroots campaign of Dr. Narcisse with obvious joy. And  they marched on Dec. 16 against the brazen attempt to steal the election — in the cities and also in smaller places like Camp-Perrin and Port-Salut in the south.

Use of systematic terror

Fraud effectively prevented Haiti’s voters from electing candidates of their choice. Instead, the ruling party’s handpicked Jovenel Moise, a banana exporter and political neophyte, miraculously emerged as the top first-round vote-getter for president. But state violence also played a role in suppressing the vote.

National police and paramilitaries fired automatic weapons into working-class areas like Arcahaie and Cite Soleil in the leadup to the Aug. 9 and Oct. 25 elections. Scores of people were killed, including two pregnant women and a 7-year-old boy. Some were “disappeared,” never to be heard from again. Later, hooded paramilitary gangs attacked marchers in Port-au-Prince with machetes, pipes, hammers and guns, killing young election protesters as police looked away.

Now, people are noticing a rise in killings of local neighborhood organizers. During the Christmas holidays, the newly created special police unit, BOID, continued their killing spree in Lavalas strongholds of Port-au-Prince. But these death squad type actions — reminiscent of those carried out by the Duvalier dictatorship, or under the murderous Latortue regime after the 2004 coup — have not deterred the resistance.

Many have commented that the Haitian people, in their vast majority, are very aware of their history — proud inheritors of the Revolution of 1791-1804, when Haiti defeated the army of Napoleon, ended plantation slavery and declared independence from France. The story of the Haitian Revolution has been passed on, in the oral tradition, from generation to generation.

How does this connect with their battle in the streets today, to stop the ongoing “electoral coup d’etat” — to have their votes counted, their choices honored and their country’s sovereignty respected?

“It’s on every lip,” said one Lavalas activist we spoke with. “People are saying that in rejecting this stolen election, we are lighting the fires of struggle, continuing the fight for equality and sovereignty that our ancestors fought for 200 years ago.”

The author, a delegate to the San Francisco Labor Council, was a member of the Human Rights and Labor Fact Finding Delegation to Haiti in October, which reported on systematic voter suppression, violence, fraud and intimidation in the election process.