Heavily armed right-wingers have occupied the Malheur National Wildlife Refuge outside of Burns, Ore., since Jan. 2, declaring they are ready to “kill or be killed.” Ammon Bundy and his brothers, leaders of the takeover, are demanding the federal government turn over millions of acres of publicly owned and federally administered land to ranching, lumber and mining industries.

The response to this takeover starkly exposes the role of the capitalist state as a repressive apparatus and as an arbiter of private property rights and ownership in class society.

The state functions historically and again in Burns, Ore., in contradictory ways toward people of different classes and nationalities. Response is never based on equal rights, equal justice and equal ownership. These double standards must be exposed and challenged.

Well-known racists, Cliven Bundy and his sons, are wealthy Nevada ranch owners and armed states’ rights advocates. They led a stand-off in 2014 against the Bureau of Land Management by refusing to pay more than $1 million in fees for grazing their cattle on publicly owned land. They have asked supporters to bring arms and join the occupation.

Some corporate media have ludicrously described these racist extremists as “patriotic militia,” “freedom fighters,” “leaders of a ‘populist uprising’ ” and even as “peaceful protesters.” FOX News, CNN and radio talk shows sympathetically portray these forces and all but champion their demands for unrestricted control of public land.

So far, local and federal law enforcement have had a hands-off policy and not imposed martial law or called in the National Guard to end the armed occupation. 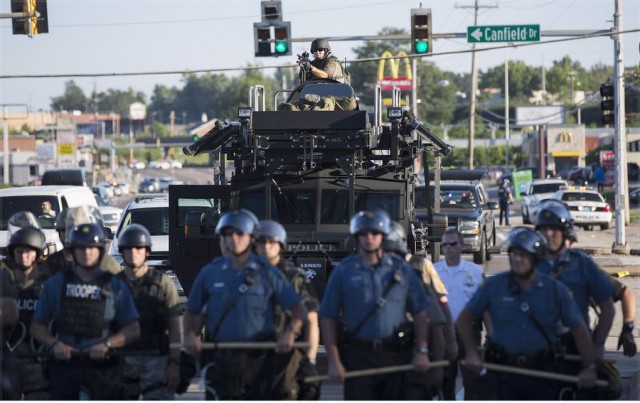 How did the state respond then? Martial law was declared and the National Guard was called out. Military equipment and armored vehicles were positioned across from unarmed, peaceful protesters; high-tech rifles were pointed at them.

In Baltimore, Chicago and other cities, the courageous Black Lives Matter movement has been met by repressive police who threaten protesters with tanks, helicopters, drones and other weapons and aggressively make arrests. This is in response to basic demands for justice and an end to police killings.

A few days after police were exonerated for killing 12-year-old African-American Tamir Rice who was playing with a toy gun in Cleveland, white, armed militias pointed their real guns at federal officials in Oregon. Police routinely kill Black youth holding cell phones, toy guns or nothing at all.

The capitalist state does not recognize the right of oppressed people to defend themselves, even in their own homes. When the MOVE family, supporters of John Africa, attempted to do so in Philadelphia in 1985, police bombed their home and 65 others in their community; 11 people died, including five children. Based on another police attack, nine MOVE members are serving 100-year prison sentences for asserting their right to self-defense.

When the Oglala Lakota Nation and American Indian Movement held a 71-day encampment at Wounded Knee, S.D., on Pine Ridge Reservation in 1973, they were met by a brutal siege of police and federal agencies, even facing assassinations. The Native people were protesting mistreatment by the government and demanding that it abide by treaty obligations. Hostile media conjured up a new “Indian War.”

Moreover, Muslims, whether in the U.S., Europe or anywhere, who carry any type of weapon, are labeled “terrorists.”  Even the use of a paintball gun in play is treated, as in the case of the Fort Dix Five, as proof of criminal activity.

After the Civil War, lands of white plantation owners, who had waged war on the federal government to maintain slavery, were supposed to be expropriated to provide reparations to the formerly enslaved. It didn’t happen. Union leaders’ promises of 40 acres and a mule to each formerly enslaved Black person did not materialize. Instead, federal troops were withdrawn from the South and sent to expropriate and exterminate the West’s Indigenous population, leaving formerly enslaved peoples defenseless from the former Confederacy and plantation owners.

Since 1865, government agencies have expropriated 95 percent of Black farmers’ land.

Native people were driven to unviable land after their lands were seized. Even after treaties were signed, their land was again expropriated if resources were found on it, such as gold in the Black Hills or oil in Oklahoma.

Historically, white militias have played a reactionary role when they grabbed Native peoples’ lands and used the Ku Klux Klan to terrorize formerly enslaved African Americans in order to expropriate their labor, land and small businesses.

Paiute Nation: ‘The land belongs to us!’

The Paiute Nation lived in the Malheur Refuge’s region for 10,000 years. In 1872, Malheur Reservation was created on a fraction of the 1.5 million acres of land promised by the federal government. Ranchers opposed this, wanting the land for their cattle.

In 1878, the Malheur Reservation was dissolved, and hundreds of Paiutes were shackled and forcibly moved, in the dead of winter, to the Yakima Reservation in Washington state. Some Paiutes hid or returned home. They were given 10 acres of the Burns town dump. Their children were barred from attending local schools.

Painstakingly over the next 100 years, the Paiutes purchased 760 acres of their tribal lands and re-established the Burns Paiute Reservation. In 1972, the Burns Paiutes were finally recognized as an independent Indian tribe. Today, they have secured more than 11,000 acres of allotment lands, which are leased by local ranchers for cattle grazing. This tribal land is considered federal land; it is tax-exempt but exists under county jurisdiction.

In this era of privatization, it is not surprising there are demands to seize public lands and privatize them for profit. The Bundy gang is demanding this land and more — for free and with unlimited access. But the Paiute Nation says the land is theirs. They say if they had occupied the Malheur refuge, site of their original reservation, the government would have treated them very differently than the Bundy occupiers.

Charlotte Rodrique, chairperson of the Burns Paiute Tribal Council, told National Public Radio on Jan. 10, “If I, as a native person, a person of color, were to go down there and do the same thing, they would have hit me on the forehead with a baton” and dragged her out.

Burns Paiute Tribal Council member Jarvis Kennedy recounted his people’s violent dispossession at a Jan. 6 press conference, stressing, “We weren’t removed; we were killed.” He demanded that the occupiers “get the hell out” of the Malheur National Wildlife Refuge. (KGW.com, Jan. 6)

The capitalist state’s role in land disputes must be examined to refute the ranchers’ outrageous demands for free access to public lands. The federal government owns more than half the land in the West, including 80 percent of Nevada and half of Oregon. The Bureau of Land Management manages 245 million acres of U.S. public land. The capitalist state seeks to allocate, mainly for private profit and some public use, the vast Western lands expropriated from Indigenous peoples.

Federal irrigation systems bring arid land into cultivation at highly subsidized rates for agribusiness. Grazing fees that some ranchers are refusing to pay are a 93 percent subsidy over market rates.

In the 1800s, range wars raged between cattle and sheep ranchers over grazing land, and then were aimed against settlers and small farmers. Each economic grouping fighting for grazing land and resources had its own militia.

The railroad industry and big banks had the largest stakes in these conflicts. The federal government arbitrated among the powerful economic interests. However, neither the government nor the banks assisted small farmers; millions lost their lands as banks foreclosed. Subsidies grew for corporate agribusiness’ large-scale production.

Today’s small ranchers cannot compete with corporate ranching operations, such as those owned by the billionaire Koch brothers and Ted Turner, the second largest U.S. landowner. They and other mega-ranchers hold subsidized grazing leases on hundreds of thousands of acres of federal land, another government handout to billionaires.

Many large ranch owners view Bundy’s reactionary movement as a convenient battering ram for them to gain greater control of public land. The big investors’ political influence may explain the favorable media coverage of Bundy’s militia. They know these forces will not challenge their wealth. The Bundys and their ilk are seeking to build their own fortunes, via land theft, racism and violence.

It should be pointed out that the state of Oregon was founded on a racist basis in 1859. African Americans were prohibited from living, working or owning property there.  In 1922, the Ku Klux Klan had 14,000 members in the state, including top officials.  Even Portland, now a “progressive” city, maintained segregated facilities.

The capitalist state arbitrates among competing business interests in an economic system based on theft of labor, land and resources. So the federal land policy the ranchers are denouncing is wholly corrupt and based on bribery and graft.

The struggle over water rights, especially during this decade-long drought, the fracking industry’s impact and the collapse of commodity prices are raising competition among corporate property owners to a fever pitch.

The power and influence of most small ranchers and businesses pale before the overwhelming economic influence and power of the transnational corporations, banks, hedge funds, weapons manufacturers and oil corporations.The Bureau of Land Management and state agencies seek to buy out the small ranchers and business owners. They are no longer highly profitable, so their profits are not guaranteed, but neither are subsidies. This drives their desperation.

The reactionary nature of the racist Bundys’ takeover must be exposed and the demands of wealthy ranchers for unlimited access to land and resources opposed. But a violent government siege of this grouping is not the answer. It would only strengthen the capitalist state’s power and use of repression — and that won’t help oppressed peoples, the working class or other progressive forces.

Rather than allowing the very individuals or companies that have devastated the land to grab more acreage, these lands should be put under the guardianship of Indigenous nations. That would be one step toward justice and reparations.