On Dec. 11, former Oklahoma City police officer Daniel Holtzclaw, 29, was convicted of 18 counts of rape and other charges associated with attacks against 13 Black women. 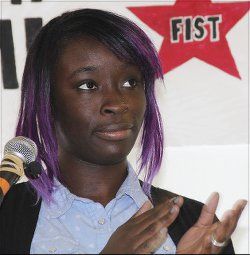 This conviction stands as a rare legal victory for Black rape victims as well as victims of police violence. Many rapes are never reported, and the few that are seldom result in convictions. Cops who terrorize Black people — harassing, raping, torturing or murdering at will — are even more rarely convicted.

While appalling, these low rates of conviction should come as no surprise to anyone with an understanding of the repressive role the capitalist state — the police, courts and prisons — plays in society. Instead, this case is symbolic of the worst aspects of the sexist “rape culture” of the United States — the system of culture, custom and law that promotes and normalizes rape and violence against women.

As the trial continued and more women testified, a harrowing picture of the officer’s predatory exploitation of authority, power and privilege emerged. Holtzclaw methodically targeted the most vulnerable — poor women, including sex workers with “criminal” or drug addiction histories who he assumed would be unlikely to be believed if they brought forth accusations against him. Using the threat of violence or arrest, Holtzclaw coerced the women into sex acts with him.

One woman reported being forced to perform oral sex on the officer while he made his firearm visible on his belt. Another victim, a 17-year-old girl, testified that he threatened her with an outstanding warrant before raping her on her mother’s front porch. “What am I going to do?” she asked. “Call the cops? He was a cop.” (The Guardian, Nov. 27)

Much of the mainstream media coverage of the case applauds the verdict as an example of justice served against a single “dirty cop.” Holtzclaw’s crimes, however, must be considered in the broader context of the generalized police war on Black people and all people of color.

The sheer number of Black men lynched by police can, at times, lead to the invisibility of the tremendous crimes perpetrated by the state against Black and Brown women and the lesbian, gay, bisexual, trans*, queer community. (Trans* is used with an asterisk to indicate the spectrum of all the different genders of people who do not conform to the either/or of male/female or masculine/feminine.) Normative discussions of power are constructed to embody cisgender (not transgender) masculinity, leaving the contextualization of the violence inflicted on Black women’s bodies a peripheral concern. Certainly, this tendency erases the fact that Black women are the fastest-growing incarcerated demographic in the United States.

While the conviction of this cop should be applauded, the state cannot be relied upon to bring justice for Black women or any oppressed peoples. Far more often, the state is the perpetrator of violence, as in the case of Wanda Jean Allen, a Black woman executed by the state of Oklahoma in 2001. The state apparatus is complicit with racist, historical repression that criminalizes and dehumanizes Black women.

Because of rape culture, gender-specific violence and anti-Black misogyny, police brutality against Black women is often synonymous with sexual assault or harassment. Yet, in order to dismantle systemic and racialized state violence and in order to achieve the liberation of all Black people, it is essential to not only include, but prioritize, the voices and lives of Black women. Holtzclaw’s conviction, though a symbolic victory, is not enough to end institutionalized racist violence against women of color. The struggle must continue until #BlackWomensLivesMatter.