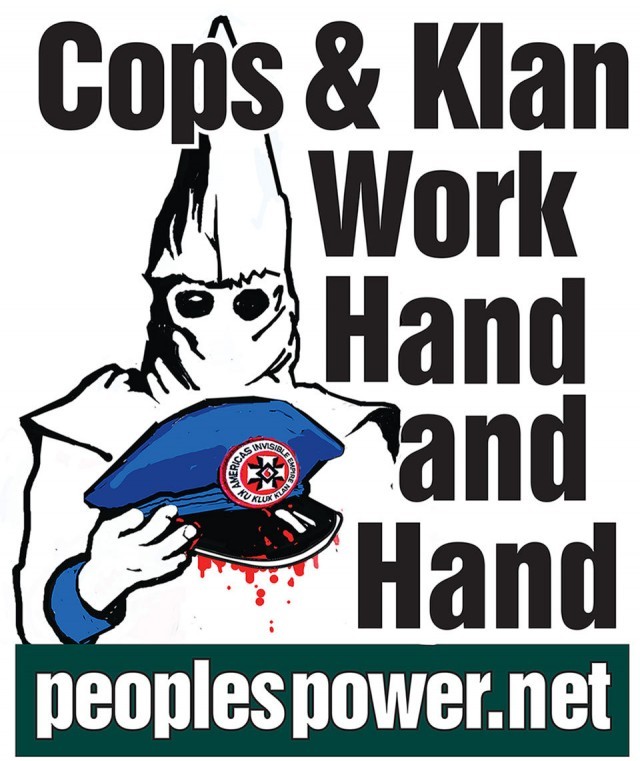 The history of unions goes back to the 18th century and the Industrial Revolution. Until there were unions, laborers seemed to exist at the mercy of the bosses, who worked them to death and starved them and their families at the same time. But as the number of wage workers in those hellish factories and mills began to rise in numbers and concentration, they were imbued with a sense of their own strength.

They figured out how to organize and get together to demand higher wages, shorter hours and better conditions. They showed the bosses that unless they won improvements, they’d walk off the job en masse and close down the profit mills. Unions were born.

Unions and bosses were like water and fire — they didn’t mix.

Now comes Donald Trump, the epitome of the super-rich oppressor of workers, with a bank account bigger than a mountain of gold. And he is claiming he has union support.

What union could that be?

It seems these cops really like what Trump said about barring Muslims from the U.S. They also like his plan to extend the death penalty — as though it weren’t already one of the harshest in the world — to anyone who kills a cop, for any reason. What if it’s a cop raping a woman or shaking down a small store owner with a gun to his/her head? Doesn’t matter.

It’s twisting the truth for anyone to call these “police benevolent associations” unions. The bosses call in the cops to break picket lines, not enforce workers’ rights. Even though more people of color have been inducted into the force, the police “unions” have been bastions of racism and white supremacy, and the function of the police has continued to be one of violently repressing the poorest sections of the working class — never the white-collar criminals who steal millions. In the United States, because of the legacy of centuries of racism, this means cops are a violent occupying force in communities of color.

So what should workers do about this? Especially, how can those white workers in the labor movement strengthen their solidarity with workers of color and immigrants, like the Muslims Trump wants to bar from this country?

A good way to start would be to kick this “union” out of the labor movement. It doesn’t belong there. It’s like having a rattlesnake in your bedroll.

It’s not a Republicans-versus-Democrats issue. It’s collusion between a bunch of racist, anti-immigrant killers with guns and a super-rich bigot who hates all real unions. Together, they’re trying to carry out a maneuver that could cast disgrace on the whole labor movement.

Say no to Trump!