Taken from a Nov. 27 audio recording on prisonradio.org. Mumia Abu-Jamal will appear in a court hearing, via video conferencing, on Dec. 18 in Scranton, Pa., to demand health care for himself and 10,000 other Pennsylvania prisoners suffering from hepatitis C, a curable disease. 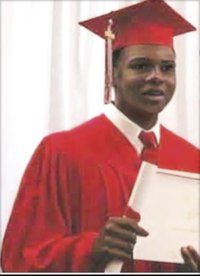 With a name like Laquan, we can safely assume his Blackness. Of middling height, perhaps 5 feet 2 inches, with a weight of 130 pounds, Laquan bounces down a Chicago avenue with typical teenage abandon.

He seems more like he’s skipping than running, his right hand holding a penknife of some 3 inches or so. One can almost feel the buzz of youthful testosterone rushing through his veins. A subterranean river of strength assuring him that he is invincible, that he can punch through walls, get hit with a mountain and rise.

And then, without warning, a shot rings out, and it spins him like a top, 360 degrees.

He falls, and unfamiliar pain grips him, curling him, folding him into a fetal position cradled by the cold earth. Then, like heartbeats, come death beats of bullets, and 17-year-old Laquan McDonald is no more.

He is but the latest Black body blasted into oblivion by a white Klansman in blue.

His once unknown name joins a chorus of the dead: Tamir Rice, Mike Brown, Donald “Dontay” Ivy, Eric Garner, Oscar Grant, Freddie Gray and more; victims all of one of the oldest maladies on the American mainland: white fear, a 3-inch blade (legal by the way) and 16 shots burned into the body of a teenager.

For a year, the cameras go dark, until a freelance journalist fights, and wins a freedom of information suit against the city. The camera replays that savage moment of a boy skipping his way into death.

There has been an arrest, yes; but don’t be surprised by an acquittal.

Any city that can make a murder disappear for a year can surely hustle up an acquittal. Only sustained struggle can make a difference.