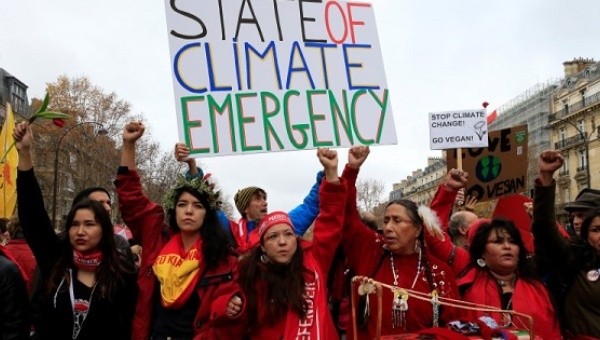 The COP21 climate conference has ended, and the corporate media are begging us to believe that a breakthrough has occurred, even though there were many heavy hearts at the end of the meeting.

“Despair” is probably too mild a word to describe the emotions expressed by many of the Indigenous peoples who attended. The Indigenous had hoped that the rich imperialist countries would set aside a small portion of the large amount they looted to assist island peoples and others who will have nowhere to go as glaciers melt and oceans rise during the rest of this century. The conference did nothing for them.

What is being hyped as a great achievement is that anything at all was agreed upon, unlike in the previous 20 climate conferences that have taken place. Yes, a last-minute accord was arrived at that would — given its most favorable outcome — limit the rise in the earth’s temperature to 2.7 degrees Fahrenheit in this century. But that would still mean devastating changes to the environment.

And the accord agreed on is not binding. Even the U.S. corporate media note that for the U.S. to implement this agreement, it would take a vote in the Republican-dominated Senate — and most of the senators have already said they’d oppose it.

Thousands of climate activists from around the world held a protest at the Arc de Triomphe in Paris as the conference ended. “We don’t like the COP21,” said one of them, Joseph Purugganan, who had come from the Philippines with other activists from a coalition called Focus on the Global South. “The message here is that the real solution will come from the people,” he said. “After 20 years of COPs, look at where we are.” (New York Times, Dec. 12)

Most climate scientists agree, and some walked out in anger. Prominent among them was James Hansen, former head of NASA, who began warning of climate change almost three decades ago. However, his prescription, which was not even discussed in Paris, is to impose a “carbon tax” on the burning of fossil fuels. Wouldn’t such a tax hurt workers and poor the most, not the rich bankers and bosses whose headlong gallop to make profits has brought the world to this state?

Naomi Klein’s book, “This Changes Everything,” correctly nails corporate capitalism as responsible for the climate change that threatens the world. That’s a step further than the older environmental movement went. But she does not recognize that the working class and the oppressed peoples will play not just an auxiliary, but the central role in tearing down the system.

Revolutionaries see climate change as a compelling issue that must bring more and more young people into the struggle of the workers and oppressed for socialism — a system without bosses and billionaires, where stock exchanges will be museums dedicated to the horrors and ridiculous extremes of the past, and where healing the earth will go hand in hand with eradicating the injustices of centuries of exploitation and racist, sexist, homophobic oppression.