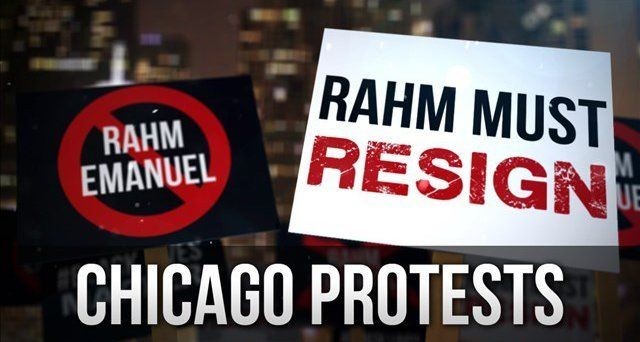 Demonstrators continue to march, protest and shut down major intersections in Chicago despite a Dec. 9 speech by Mayor Rahm Emanuel in which he was forced by mass actions to apologize for the police killing of Laquan McDonald 13 months ago.

Protesters and community activists continue to call for the firing of the mayor and the state’s attorney, as well as accountability of all police officers involved in these and other shootings.

While the mayor was giving his speech, 75 white-coated medical students and health care providers lay on the ground in front of City Hall for a 16-minute die-in to protest what they see as a public health crisis of police violence that affects many of their patients. The protest was organized by six organizations of medical students, nurses, residents and physicians in the city, including White Coats for Black Lives.

Meanwhile, State’s Attorney Anita Alvarez presented what has been characterized as a “27-minute infomercial” justifying the decision not to charge officer George Hernandez in the police shooting of Ronald Johnson, days prior to McDonald’s death. The dashcam video clearly showed Johnson being shot in the back, never turning toward police. There is no clear picture of a gun in his hand.

Dorothy Holmes, Johnson’s mother, responded: “For her to say my son has an object in his hand, I tell it to her face: It’s a bald-faced lie. He had nothing in his hand. I hope one day she feels the pain I feel.”

The mass response to these events is exposing the previously covered-up history of police violence in Chicago. A video was released Dec. 7 of police Tasering and abusing Philip  Coleman while handcuffed in a jail cell. His family had requested he be taken to a hospital following a mental breakdown. Instead, he died in jail.

“Someone in this city needs to be responsible for killing my son. And the Chicago police are at the head of this table,” his father, Percy Coleman, told WLS-TV News. When finally given a sedative, Coleman died from an allergic reaction to the drug, according to the autopsy. The family attorney, Ed Fox, said Philip was susceptible to neuroleptic syndrome because he was Tasered “up to 15 times.” The coroner’s report showed 51 external injuries and 19 internal injuries, all occurring prior to the drug being administered.

The Chicago Alliance Against Racist and Political Repression filed a complaint this week on behalf of more families who say their loved ones were shot and killed by police. The group turned over a list of dozens of cases, including shootings of teenagers by officers and confessions coerced by torture.

In an attempt to appease the growing mass calls for righteousness and accountability, the U.S. Department of Justice has added Chicago to the list of 20 cities they claim to be investigating regarding the use of force by police. Clearly motivated by growing nationwide movements, Attorney General Loretta Lynch said that “when suspicion and hostility [are] allowed to fester, [they] can erupt into unrest.”

Included in the list are Baltimore and Ferguson, Mo., where rebellions have taken place, led by Black youth and supported across the country. What is really needed in Chicago is a People’s Tribunal where the truth can be told and the real role of the police can be exposed.

In this capitalist system, the basic role of the police is to protect the private property of the rich, which is wealth that the masses of working and oppressed people have created and deserve. State violence by the police reinforces the divide-and-conquer program of racism and anti-immigrant propaganda.

But it is a new day. As events propel activism, unity and mass struggle will turn this system upside down.