Raleigh, N.C. — Billionaire realtor Donald Trump has been traveling the country, filling stadiums with bigots and building a dangerous movement around a racist, ultra-right ideology. When he came to Raleigh on Dec. 4, he was likely expecting much of the same. 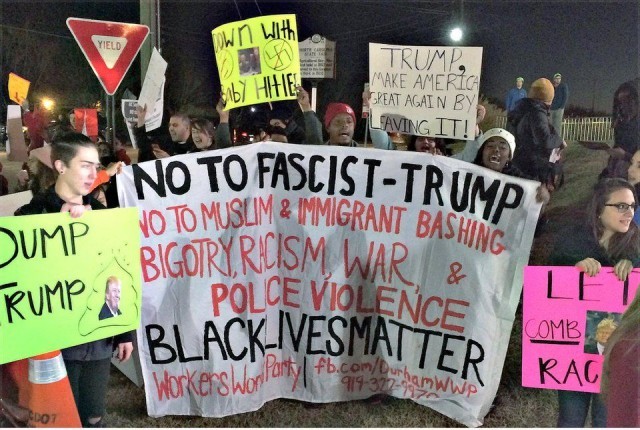 Instead, he was met outside the Dorton Arena by a militant, multinational demonstration and was then disrupted inside over 10 times — forcing the event to end early.

Chants of “Hey, let’s be clear, no racists are welcome here!” greeted Trump supporters from the moment the doors to the arena first opened. The demonstration quickly grew to several hundred.

Many people — particularly young immigrant rights and Black Lives Matter activists — had traveled for hours to join the protest. A group of about a dozen mostly young Muslims joined the rally and helped lead spirited chants denouncing racism, attacks on immigrants and Islamophobia.

The rally outside lasted for nearly three hours. Chants of “Black Lives Matter,” “Undocumented and unafraid,” “Money for jobs and education, not for war and incarceration” rang out to confront those entering the arena.

It was a tremendous display of unity and solidarity. The crowd included Black, Latino/a, Arab and white youth and students, fast food workers, members of the lesbian, gay, bisexual, trans* and queer communities, and many others standing shoulder to shoulder. They ultimately shut three of the four entrances to the arena. (Trans* is used with an asterisk to indicate the spectrum of all the different genders of people who do not conform to the either/or of male/female or masculine/feminine.) 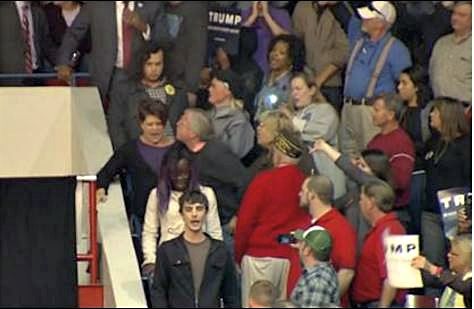 Inside, several dozen people in groups of two to four disrupted Trump’s racist diatribe every five or 10 minutes with chants of “Black Lives Matter!” and “No Trump, No KKK, No fascist USA,” among many others. Corporate news reports following the demonstration noted that the number of disruptions at the Trump rally in Raleigh greatly outnumbered those at any previous gathering.

The events in Raleigh clearly showed that multinational unity and solidarity are the best tools to beat back the rising tide of ultra-right ideology that Trump is spewing nationally, and that these gatherings must be confronted head on by a variety of militant tactics.

Plans formulated quickly ahead of rally

Trump’s campaign gave only four days’ notice of his rally in Raleigh, allowing only a short time to pull together action plans.

After consultation among various organizations and individual activists, using social media and conference calls, plans were quickly developed for both the demonstrations outside and the disruptions inside.

The danger that Trump and his followers represent in this period, and the hate and racist vitriol that pour out of his mouth every time he speaks, have been easily recognized. Trump’s words move his supporters to violence; he is a modern-day George Wallace or David Duke.

The shooting of Black Lives Matter activists in Minneapolis, the attack on Planned Parenthood in Colorado, the attacks on mosques, the Muslims pulled off flights, the refugees barred from entering the U.S., the vicious anti-immigrant slurs and the escalating police killings — all these vicious acts are on the minds of many. They clearly demonstrate the urgent need for progressive forces to unite and fight back against this ultra-right movement.

The main banner at the demonstration clearly illustrated this understanding: “No to fascist Trump! No to Muslim and immigrant bashing, bigotry, racism, war and police violence! Black Lives Matter!”

Under the auspices of a rally for presidential candidate Trump, enraged bigots of every stripe gathered like an ominous cloud. The white supremacist, misogynistic and heterosexist character of this event was readily apparent. “We can’t all be on welfare” and “Benghazi matters” were among the cries of those selling buttons and bumper-stickers reading “Trump that bitch” to the eager, almost exclusively white crowd, whose whole sense of reason was fogged by fury. The crowd moved through a Secret Service checkpoint into the arena, filling it with a sea of hate.

After a convocation delivered by a Black pastor, in which we were exhorted to pray to “the God of the Bible,” and heard an utterly terrible rendition of the U.S. national anthem, Trump came onto the stage. He started by boasting of his polling numbers, assuring his supporters that, once he’s elected, they too will feel the joy of “winning.”

Four minutes into this self-aggrandizing diatribe, the first disruption occurred. A solitary demonstrator began exclaiming “Black Lives Matter,” effectively halting the proceedings. This affirmation of the importance of Black life was quickly drowned out by thousands chanting “U.S.A.! U.S.A.!”

After the demonstrator was removed by police, Trump claimed that the “dishonest media” were going to blow the disruption out of proportion, noting that it was just one person — totally unaware of how ironic this statement would soon become. He told the crowd to “Be nice.” But at the same time he fabricated the claim that being nice to protesters would result in him being criticized as “weak.” The continuing disruptions were then met with far greater hostility, often including physical violence from both Trump supporters and police.

Trump’s stream-of-consciousness ranting then sank ever lower, tapping into deep reservoirs of all kinds of chauvinism latent in this audience of mostly white people so fearful of losing what they have, yet themselves increasingly made poorer by the functioning of the economic system for which they seek scapegoats.

Trump agitated the crowd with some of the following: racist imagery of strong, young, male refugees from foreign lands infiltrating the U.S.; promises to “go a couple of steps beyond waterboarding” and to take Iraqi oil, leading a call and response of “To the victor, go the spoils”; boasts of being “the most militaristic,” followed by a vow to “make this country proud again,” presumably through war; claims that the San Bernardino, Calif., shooting would have been anticipated were it not for “political correctness”; and, of course, laying all the country’s economic woes at the feet of immigrants, whom he plans to forcibly expel while constructing a great wall to block further immigration.

Disruptions wear down the bigots

Against this frenzied current, protesters repeatedly rose from the crowd to affirm the rights of oppressed peoples to live with dignity and be treated with respect.

Every five minutes, like clockwork, another group or individual bravely stood up to halt the hateful proceedings. With each successive disruption, Trump and the crowd grew more belligerent. Chants of “U.S.A.!” were replaced with shrieks of “You’re a traitor to this country!” Trump’s pretense of kindness was replaced by bellows of “Get ’em out of here!”

In the standing section of the auditorium, right in front of the podium, a young man was punched in the face, to the cheers of the ravenous crowd. At one point, three undocumented immigrants disrupted Trump’s speech with “Stop the hate, we make America great!” Felyta Hernandez, one of the three, told Workers World: “After we led chants about the deaths on the border between Mexico and the United States, Trump supporters immediately began to grab us, shouting racist, anti-immigrant threats. One of us, a 12-year-old girl, was scratched by police as they violently escorted us out.”

All three are members of Si a Las Licencias, which organized militant sit-ins and rallies in October to challenge Gov. Pat McCrory’s signing of a reactionary bill. It restricts the types of identification recognized by law enforcement and the state of North Carolina that would also deny local governments from adopting “sanctuary city” policies.

The waves of verbal abuse and physical repression did not erode the stalwart demonstrators, and the increasingly frustrated Trump was clearly stumbling. As he tried to speak over the protesters, he also made hand gestures calling for their expulsion. Groups of three or more would bring the entire event to a shrieking halt for a minute or two, only to have the next disruption occur five minutes later.

This lurching, stop-and-go movement took its toll. Trump’s speech lasted only about 25 minutes before transitioning to questions and answers. One questioner asked what would befall “our women” if the refugees didn’t become celibate. Trump pretended not to hear so that it would be repeated. The protests kept coming. He stoked the petty, infantile persecution complex of the crowd by assuring them he’d “Bring Merry Christmas back to America.” And the protests kept coming.

He exploited the emotional distress of a 12-year-old by making her repeat three times a question about what he would do to make the country safe so she wouldn’t have to be scared anymore. She finally wailed over the microphone, “You will build our military SO strong, SO POWERFUL!” And the protests kept coming.

The event finally ended after about 45 minutes — half of Trump’s normal time, during which he was interrupted 10 times. Rather than being worn down by the torrent of bigotry, the demonstrators wore down the bigots. Through endurance, they carried the day and effectively dispersed the cloud of hate.

But what was on display that evening has not ceased to exist. This storm will appear again and must be opposed always, lest the storm produce stormtroopers. Victory can only be achieved through determined, sustained resistance.

As we build from the momentum of our victory and continue our revolutionary work, it is important that our opposition to Trump and his right-wing supporters is understood in the larger context of capitalism and colonial imperialism.

Trump is not an abnormal product of the system. Though he may be forthcoming and unabashed in his violent and hateful rhetoric against immigrants, Muslims, women, Black lives, non-able-bodied individuals, refugees, the LGBT*Q community and more, the narratives that he and his supporters subscribe to stem from the illogic of white supremacy, which is intrinsic to the foundation of this country. It is not Trump alone, but the entire capitalist system that must be fought.

The actions in Raleigh must be replicated elsewhere to beat back this growing danger wherever and however it rears its ugly head.

Danielle B., Ben Carroll and Patrick Snipes contributed to this article.